The Wildkats used an 11-0 run in the final 2:01 to pull away from a 46-40 advantage, connecting on 4-5 field goal attempts plus 3-8 free throws compared to 0-6 plus 0-4, respectively, for the visitors. Duncan also had a 6-3 rebounding advantage and committed one fewer turnover in the same span. Seniors Christopher Corona and Samuel Lacey added four points each, while sophomore Wesley Conyer chipped in three before picking up his fifth personal foul with 19 seconds left in the game.

“I didn’t think it would be that close,” Duncan head coach Eldon Merrell said. 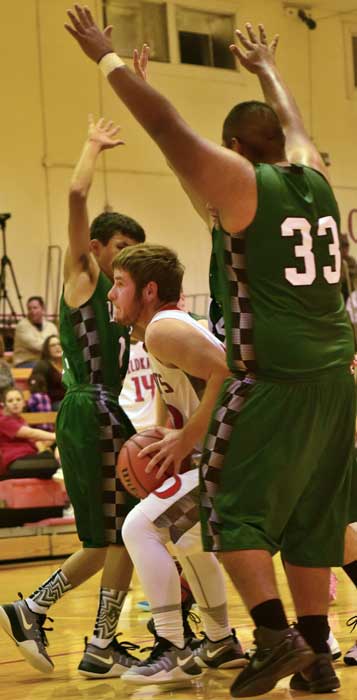 After starting with three ties, Duncan went on an 8-2 run to take a 14-8 advantage into the second period.

Animas came back to tie 19-19 with 2:08 left in the first half, before finishing with a 4-3 edge to take a slight lead into the locker room at halftime.

Duncan tied the score at 28-28 on senior Nathan Jones’ basket with 2:45 elapsed in the third period and a Corona field goal 21 seconds later gave the hosts the lead for good. The final eight minutes opened with the home team sporting a 39-32 advantage.

Corona finished with a game-high 25 points and Lacey totaled 10 points while going just 2-11 from the free throw line. Jones had eight points, junior Braden Basteen and Conyer each had five and sophomore Michael Lennon four.

Duncan travels to Superior Tuesday (Nov. 29) and is at Winkelman Hayden on Dec. 6 before hosting North Phoenix Prep on Dec. 10.