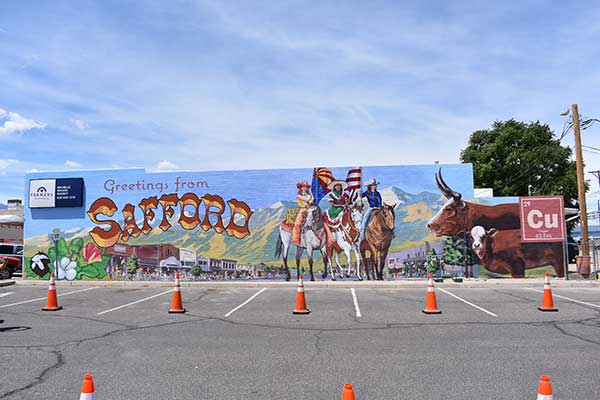 The first of several downtown Safford murals was presented during a ribbon cutting ceremony Wednesday, May 15, 2019 at 11:30 am. The mural was painted on the east wall of the Farmer’s Insurance office on Main Street and 6th Avenue.

The mural was designed and painted by Amy Novelli. Michaela Dannenbrink served as the assistant painter with help from the Dannenbrink family. The Dannenbrinks own and operate the Cottage Bakery in Safford.

Novelli has painted murals in Ohio, Pennsylvania, Wyoming, Tucson, Lake Havasu, and other places around the country. Novelli resides in Tucson and also does sculptures, portraits, and has other fine art in galleries.

Novelli, expressed gratitude for the local businesses that assisted with the project:

“The thing I love the best about doing murals in different places is getting to know the towns and the people in them,” Novelli told the group. “So it’s great to get to know all of you and I hope to come back to visit.”

The project was spearheaded by Amber Hogle, administrative events liaison for the City of Safford.

“This is supposed to be the first of many murals,” Smith told the group assembled for the ribbon cutting. “If you have an idea for a mural that you want to put up and you have funding for it, please do.” Smith pointed out that there are a lot of blank canvasses downtown.