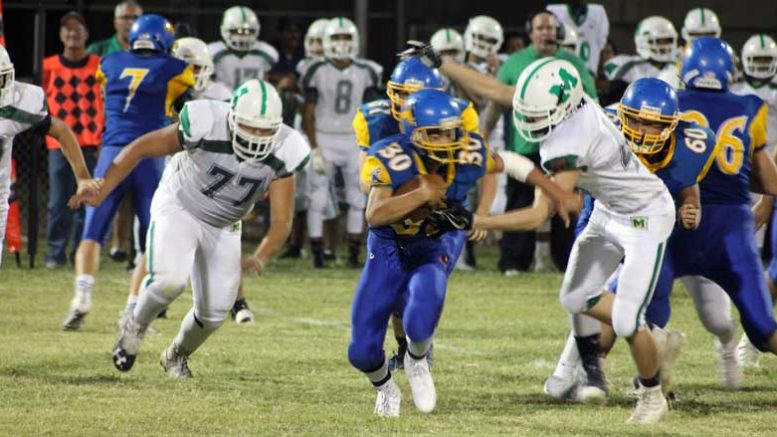 Photo By L. Scott Bennett: Emilio Molinar and the Pima Roughriders ran roughshod over the Miami Vandals on Friday night, 44-12.

The 2017 High School Football season officially kicked off at Edd Hubbard Field in Pima on Friday night when the Miami Vandals took on the Pima Roughriders.  While the Vandals put up a good fight and even were tied at the half, they could not stop the high-octane Roughrider offense and Pima opened the season with a 44–12 victory.

Both the Pima and the Miami offenses got off to a slow start. Early on, it appeared as if Friday night’s game would be a defensive showdown. While Pima moved the ball, they could not convert any drive into points for the entire first quarter. Bogged down by turnovers, the opening quarter came to an end with goose eggs still on the board. 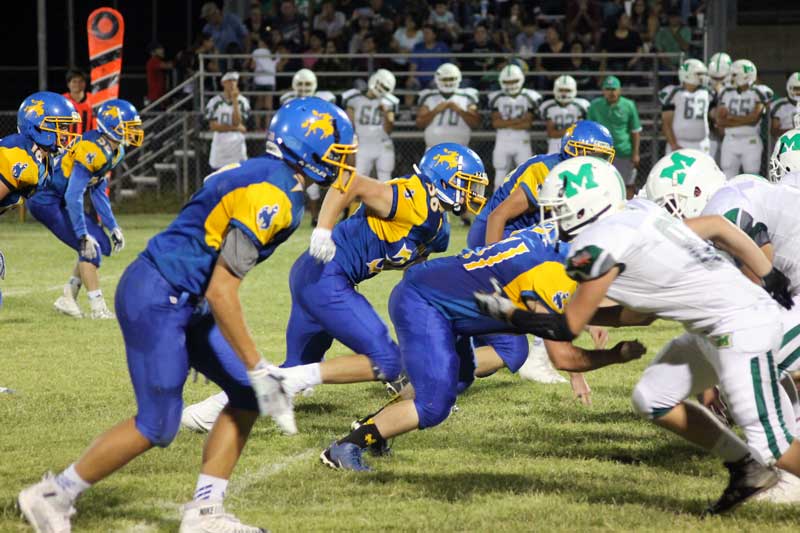 Pima got things going in the second quarter when senior quarterback Josh Whitaker hit senior Trey Thompson with a TD strike. The two-point conversion failed, but Pima was on the board with a 6–0 lead.

However, the Vandals answered back on their next possession. After it appeared that the Pima defense had the Vandals stopped several times, Miami continued to find a way to keep the drive alive. Converting on three different fourth-down plays, the Vandals finally hit pay dirt on a fourth and 12.  The Pima defense stopped the two-point try, but the Vandals had tied it up. 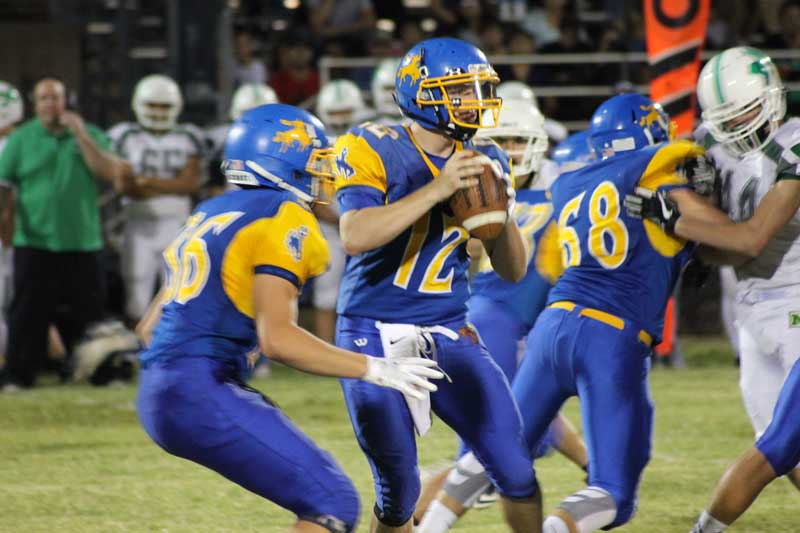 Photo By L. Scott Bennett: Pima quarterback Josh Whitaker drops back to pass. Whitaker was involved on all six of Pima’s touchdowns.

After a 6-6 tie at the intermission, the Pima offense came out of the locker room looking like a new team in the third quarter.

On Miami’s first drive of the second half, Pima’s junior defensive end, Bridgen Hughes, jumped on a Vandal fumble giving the ball to the Roughriders with a short field. With the ball on Miami’s 14, Whitaker rolled out looking to pass. With no one open, the Pima QB tucked the ball and scampered 14 yards for the score giving Pima a 12–6 lead.

With this quick drive, the Pima offense came to life and then continued to roll. The Roughriders found the end zone again with 4:55 left in the third quarter when Whitaker again hit Thompson for the TD, this time on a 29-yard slant. Senior Emilio Molinar then snuck around the end for two and a 20-6 Pima lead. 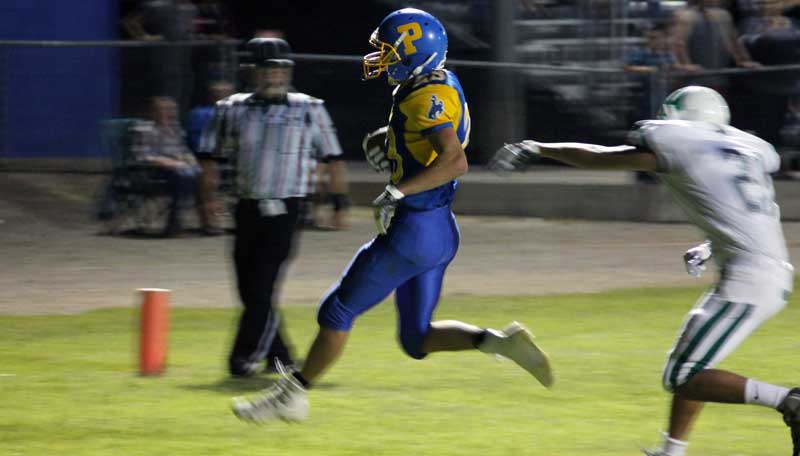 Photo By L. Scott Bennett: Aaron Judd takes it in for six.

In contrast to the Roughrider offense, the Miami offense appeared to implode in the third quarter. After several bad exchanges between the Vandal center and quarterback, the Pima defense again took advantage of a Miami fumble, this time recovering a snap that soared over the Vandal quarterback’s head on the Miami 5-yard line. Pima’s senior tight end Dillon Jones then added six to the board when he hauled in a Whitaker pass. After senior Aaron Judd went around the end for two, Pima had a 28–6 lead.

The Vandals tried to make a game out of it, putting another one in the end zone late in the third quarter.   With the score, Miami closed the gap to 28-12 and appeared to have new life. However, after the lockdown defensive play of the Roughriders, that was as close as the Vandals would get. 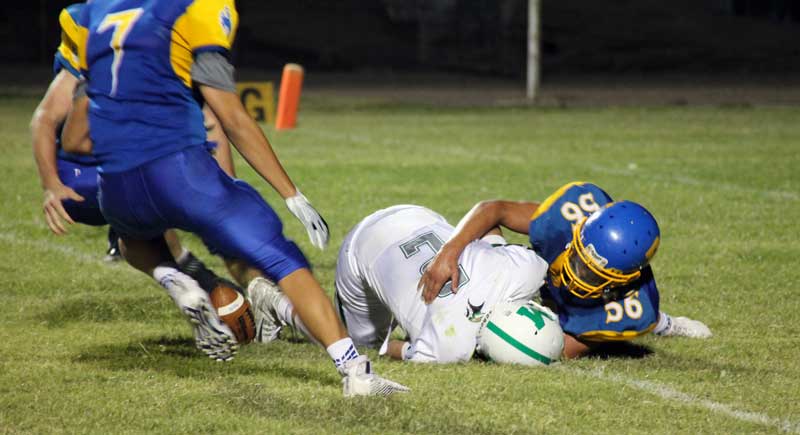 With the offense rolling in the fourth quarter, Pima put in sophomore fullback Trevor Pruszynski, who had huge gains against the Vandal defense. The Roughriders also saw junior fullback Jacob Whitaker have a nice night with several big runs in the fourth, including a sweep for more than 30 yards.

The Pima quarterback would take another one in himself in the final period when Josh Whitaker called his own number on third and goal from the one. With a Brennon Hughes run, the Roughriders converted the two-point play and had a comfortable 36-12 lead. 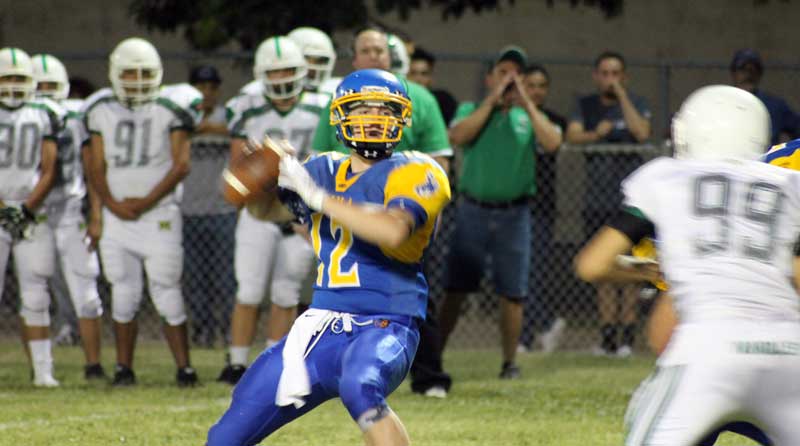 The Roughriders closed out the scoring for the evening after Pima got a huge 45-yard run, followed by one more Josh Whitaker TD scamper. The quarterback’s touchdown gave him three through the air and three on the ground for the night, earning him Gila Valley Central’s Player of the Game honors. With the successful two-point try, the Roughriders finished off the Vandals, 44–12.

After the victory, Pima head coach Jace Hancock was complimentary of his team. Pointing out a need to limit turnovers and cut down on penalties, Hancock explained that “I saw a lot of good things from the boys.” The coach was pleased with the field position that was given to the offense by excellent defensive play and added that “these kids have got a lot of heart, and they gave it everything they had tonight.” 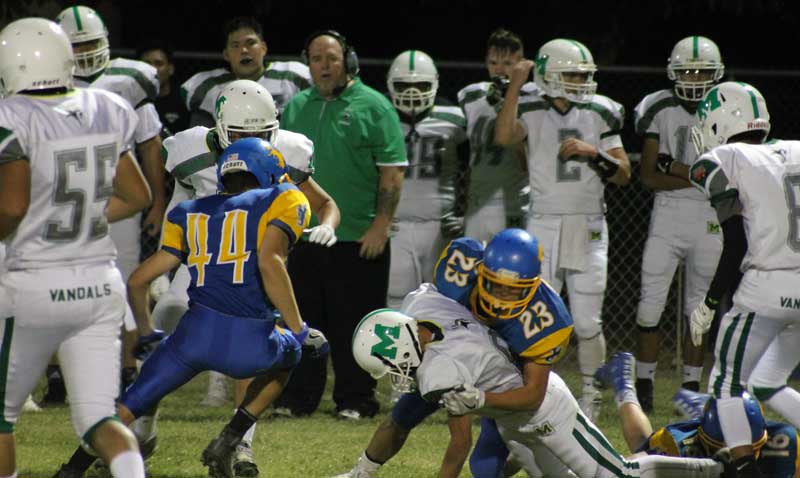 Photo By L. Scott Bennett: Pima’s defense clamped down on Miami. Aaron Judd (23) makes sure the Vandal does not pass.

While Pima needed the first half to knock off the rust from the long offseason, the Roughriders played hard all night and looked sharp by the third quarter. If Pima can continue to improve and play with the discipline that they showed in the third and fourth quarters of tonight’s game, Roughrider fans could be in for a special season.

Next week the 1-0 Roughriders will host the Gilbert Christian Knights at Edd Hubbard Field at 7 p.m.