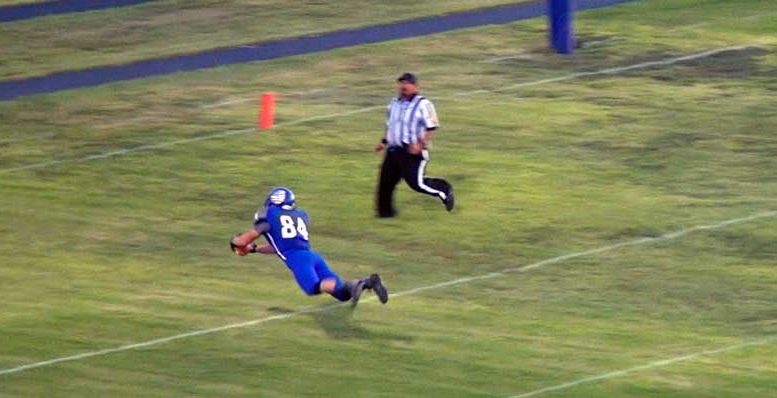 Jon Johnson Photo/Gila Valley Central: Cameron Abril opens up Safford's scoring with this touchdown less than a minute into the Bulldogs' season opener against the Payson Longhorns. The Bulldogs came away victorious, 42-0.

SAFFORD – While it was a picturesque evening on the field it was a perfect storm of offense, defense and special teams that propelled Safford over the visiting Payson Longhorns on Friday night, 42-0.

Jon Johnson Photo/Gila Valley Central: It was a picturesque night for football.

The Bulldogs came out swinging and took only three plays to punch their first score as sophomore quarterback Mason Duros tossed a beautiful backside pass to Cameron Abril, who snatched it and leaped into the end zone. Abril was a popular target and finished the night with 5 receptions for 136 yards.

The defense then showed what it could do, and after a sack by Manuel Aparicio, Longhorn quarterback Brock Davis threw an ill-advised pass under pressure that was snatched up by Bulldog Dylan Dorrell. With a clear path ahead, Dorrell took the interception back 27 yards for the Bulldogs second score of the night with 9:33 still left in the first quarter.

“I’m excited (about) how we came out and played,” said Safford head coach Michael Alba. “We started real fast.”

Payson finished the night with just 70 yards of total offense, with three turnovers and 8 punts. One of the punt attempts ended up in a score for Safford when kicker Hunter Thompson couldn’t handle a bad snap in the second quarter near the Longhorns’ goal line and he ended up fumbling into the end zone, which Aparicio happily snatched up for the score.

Alba utilized a rotating quarterback strategy like he did last year, this time with Duros and Aparicio, both of whom showed they could toss the long ball. Aparicio had several point-on deep passes, including a 40-yard bomb to Josh Romero and several to Abril. Aparicio finished the night behind center 4-5 for 98 yards and also ran for 58 yards on 9 attempts.

“We’re trying to take some of the load off of Manny,” Alba said. “We’ve got some good young (running)backs . . . We let him (Aparicio) do his thing and he gets it done.”

While just a sophomore, Duros showed he had some accuracy and poise in the pocket as well. He ended up finishing 5-11 for 100 yards and one touchdown pass.

After Aparicio found sophomore tight end Collin Thompson for a 5-yard touchdown, the Longhorns moved the ball down the field for the first time but soon coughed up the ball to Taylor Hornelaz.

As time ran out in the half, Duros stepped in at quarterback and led the Bulldogs down the field on two passes to Abril and Justin Torrio, yet another sophomore.

With only 5 seconds left on the clock, however, the Bulldogs elected to set up for a field goal with the strong and sure leg of Abril at the helm. Abril ended up making all six extra point attempts on the night.

Aparicio came in for the play as the holder, and as he got the snap instead of placing the ball down for the kick, he casually flipped it over his shoulder to a racing Abril. The lob came up short and hit the ground but it bounced right back up to Abril who took a couple strides before tossing a 25-yard touchdown pass over the outstretched arms of four defenders to land in the welcoming arms of Hornelaz. And with that, the Bulldogs went into halftime with a more than comfortable 35-0 lead.

Jon Johnson Photo/Gila Valley Central: Cameron Abril’s pass just passes over the defender’s outstretched hands and into the grasp of Taylor Hornelaz for a touchdown on a field goal fake.

Due to his big night receiving, tossing his own touchdown, catching another and going 6-6 on extra points, Abril was named Gila Valley Central’s Player of the Game.

The Bulldogs weren’t finished, however, and added one more score in the third quarter as freshman C.J. Scrivner bounced around the left side for a 5-yard touchdown. Safford piled up a total of 373 yards of offense on Payson and had no turnovers on its way to a 42-0 victory.

One only needed to see the ear-to-ear smile on sophomore Collin Thompson’s face as his father came to congratulate him after the game on his first varsity score and victory to know how good the season home opener win felt to the team. Safford (1-0 conference, 1-0 overall) will host Sahuarita on Friday, Aug. 21 for the Mustangs’ season opener.

In a highly anticipated rematch from last year’s thrashing, the Willcox Cowboys’ new coach didn’t seem to make much difference as the defending state 2A Champion Thatcher Eagles showed why the chase for the title runs through the land of green as they demoralized Willcox, 52-6.

Thatcher (1-0 conference, 1-0 overall) will travel to Benson on Friday, Aug. 25 for the Bobcats’ season opener.

Pima took care of business and came back from a sluggish first half to put a whooping on Miami, 42-12. Pima (1-0 conference, 1-0 overall) will host Gilbert Christian on Friday, Aug. 25 for the Knights’ season opener. See our complete game story for more on the Pima game.

The Duncan Wildkats scored 8 points in the first quarter but that was all they could muster as they fell 38-8 to the Hayden Lobos. Duncan (0-1 conference, 0-1 overall) will host the NFL Yet Eagles in their season opener Friday, Aug. 25.