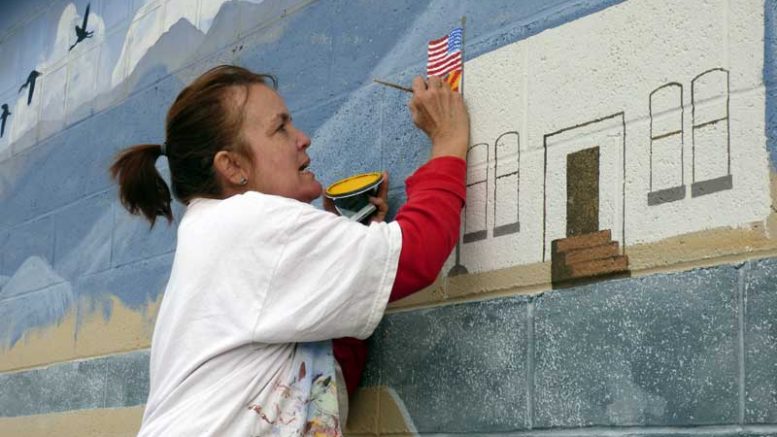 Photo By Dexter K. Oliver: Local artist Janine Eddy turns her vision of the town’s 1950s look into an actual 800 square-foot mural on the north wall of the old Lehman’s building/Duncan Dollar Store.

A wave of creativity is sweeping the nation and the town of Duncan is riding the leading edge. From inner cities to rural villages, communities are being enhanced, invigorated and commemorated by the bright colors and oversized vistas of murals. For the most part, these artistic endeavors are a collaborative community venture.

The funds for the most recent mural in Duncan were provided as one of four community improvement grants to the Preservation, Restoration in Duncan Enhancement (PRIDE) Society by Greenlee County’s most gracious and prolific benefactor, Freeport-McMoRan Inc.

Local artist Janine Eddy rose to the challenge of turning a vision of the town’s 1950s look into an actual 800 square-foot artistic rendition on the north wall of the old Lehman’s building/Duncan Dollar Store.

The location on the south corner of the Old West Highway (Route 70) and Hill Street was appropriate since another PRIDE Society project is directly across the way at Spezia Square. Improvements there include brick flower beds, a gazebo, planted grass and trees, picnic tables, an antique lamppost and clock, an opera house stage and an old west storefront. 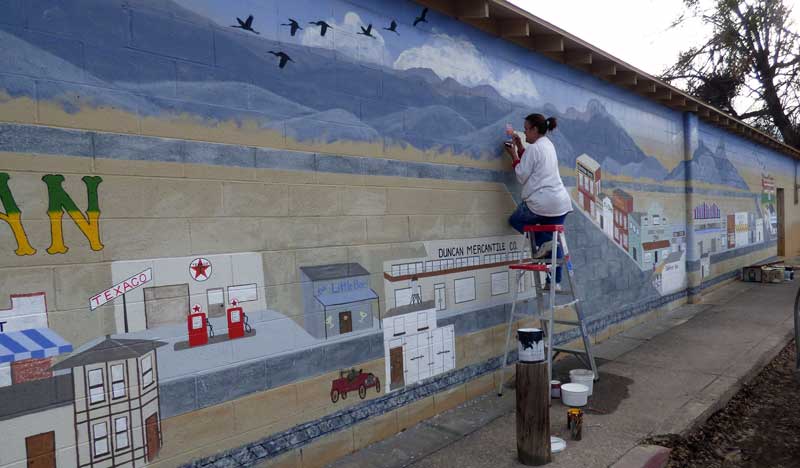 Photo By Dexter K. Oliver: Janine Eddy’s latest mural shows the railroad track that led to Duncan’s initial construction, main streets, schools and other buildings of the 1950s and their businesses.

Murals are one of the earliest forms of art produced by humans and offer a valuable testimony to prehistoric time. La Cueva de las Manos (the cave of hands) in Argentina, for example, has mural art work that dates back 12,000 years ago. The famous Lascaux caves in France and the Altamira caverns in Spain house fantastic murals that are 17,000 and 15,000 years old, respectively. Aboriginal rock murals in northwest Australia are perhaps the oldest, dating back an incredible 40,000 years.

During the Renaissance period in Europe, large murals were signed by their creators for the first time. They complimented the exponential building of churches and cathedrals but also portrayed a veneration of everyday people and activities. During the 1920s in post-revolutionary Mexico, the famous “fathers of the modern mural movement”, Diego Rivera, Jose Orozco, and David Alfaro Siqueiros, covered public buildings with their mural art.

The subject matter of murals has always been as varied as human experience. Nowadays it is an important vehicle for everything from political change to wistful nostalgia for different eras. It is a part of the American DNA that stimulates communities and catches the eyes of any passers-by and draws them in. Murals play a vital role in creating social culture, a commodity much desired in our electronic age, and promoting discussions between people. It has been stated that the experience of art moves us from the everyday into the realm of possibility.

Duncan has a history of understanding the value of murals, from the Hal Empie classic “Greenlee”, which hangs in the cafeteria of the local high school, to the “Fighting Wildkats” logo of that same school, which adorns the west wall of Wanda’s Kitchen on the Old West Highway, and was also painted by Eddy.

Her latest mural shows the railroad track that led to Duncan’s initial construction, main streets, schools and other buildings of the 1950s and their businesses. Some artistic license is involved with the familiar horizon showing landmark peaks easily seen from Duncan. Steeple Rock, Mt. Royal, Vanderbilt Peak and Saddleback Mountain in the mural are a mirror image of where they are actually located to the east of town.

Just completed, the “1950s Duncan” mural will hopefully be followed by other similar art projects that reflect the power of paint and Duncan’s ongoing sense of community.