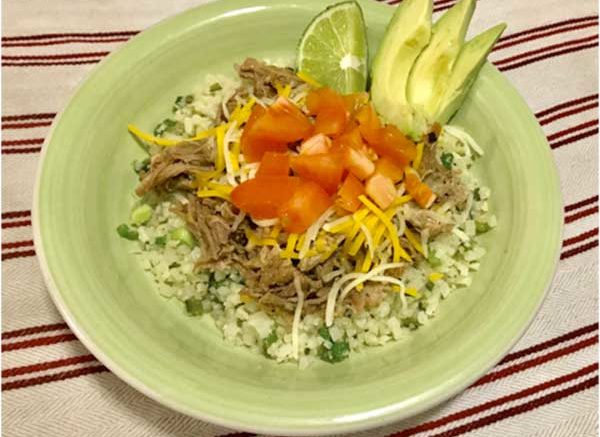 Shortly after Christmas my Facebook newsfeed was exploding with Instant Pot recipes. It seems this kitchen appliance was the hot ticket gift of 2017. I’ve owned a stovetop pressure cooker and a Crockpot since I was married 7 years ago, so I never saw the need to purchase a device that combined the two. However, Santa surprised me with an Instant Pot Duo, and as I researched it online I realized it was a bit more than what I had originally thought. My Instant Pot is a 7-in-1, functioning as a pressure cooker, slow cooker, rice cooker, steamer, sauté-er, warmer, and yogurt maker. It saves time, uses less pots and pans, and has a timer setting so that I can prep during my kids’ naptime, have it start cooking late afternoon, and then keep it warm until we are ready to eat. I’m still learning and practicing this new method of cooking, but so far I’m impressed! If you do not own an Instant Pot or electric pressure cooker, no worries, there are easy instructions for using a slow cooker to make this dish.

We are big green chile fans, so I was pretty excited to try this healthy recipe. Living in the Southwest, the ingredients weren’t difficult to find, although I did have to substitute the pork sirloin roast with a pork butt roast (which is higher in fat).   After sautéing the meat, I drained some of the grease, dumped in the green chile salsa, and pressed a couple buttons…easy, peasy! One thing to note about being a new Instant Pot user is that it’s a little nerve-wracking when you go to open the lid after cooking is complete. Is it going to be burned to a crisp? Will it be raw? What if all the water evaporated and it’s dry as a bone? Luckily, I was pleased to find moist, tender meat that shredded with no effort.

I assembled the taco bowls, topped with cheese, tomatoes, avocado, lime juice, and sour cream. The cauliflower has a different texture than regular rice, but I enjoyed having a little crunch in my taco bowl. Obviously it was a little spicy, but not to where it burned my taste buds off. My kids were able to eat it just fine, and the heat can be adjusted by using more or less poblano pepper or finding a hotter or milder green chile salsa. This recipe is one I will definitely be making again. I hope you like it too! 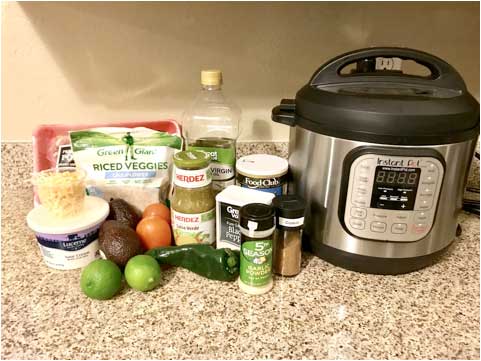 Pork sirloin roast, about 2 lbs., trimmed and cut into thick slices cut against the grain

Trim the pork roast to remove visible fat and any undesirable parts. Then cut the meat into thick slices, cutting against the grain so when you shred the pork later you’ll get nice short pieces. (Read this post on How to Slice Meat Against the Grain if you’re not sure about that.) 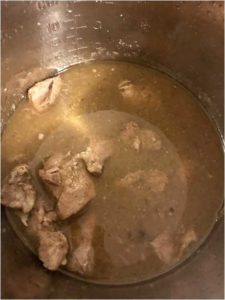 Put browned pork in the bottom of the Instant Pot and pour in the Green Chile Tomatillo Salsa. Lock the lid and set to MANUAL, HIGH PRESSURE, and 45 minutes.

When the time is up use NATURAL RELEASE for at least 20 minutes; then use quick release to release the rest of the pressure. Remove the pork to a cutting board and use forks to shred apart. Turn the Instant Pot to KEEP WARM, and put the meat back in.

While the meat is cooking, follow instructions to make Best Easy Cauliflower Rice (unless you are using frozen). If you’re adding the Poblano Chili Pepper, cook that for a few minutes in the olive oil right after you remove the garlic pieces (before you add the riced cauliflower). If you’re using frozen cauliflower in a bag, you may need two bags to get enough rice for this amount of meat.

To serve, put cauliflower rice mixture into the bottom of a serving bowl and top with a generous amount of the hot saucy pork mixture. Squeeze lime over if desired, and top with grated Mexican Blend Cheese and sour cream, plus any other taco toppings as desired.

To Make Green Chile Pork in a Slow Cooker:
If you’re making this in a slow cooker, follow instruction above for trimming, seasoning, and browning the meat, then place the browned pork in the slow cooker and pour the salsa over. Cook 7-8 hours on LOW.

When the pork is done you will probably need to reduce the salsa, since the slow cooker ends up with more liquid than the pressure cooker when the food is done. Remove the meat to a cutting board and if the sauce seems thin, put it in a small pan and simmer at medium-low heat until some of the water has evaporated and the sauce has thickened to your liking. Serve as above.