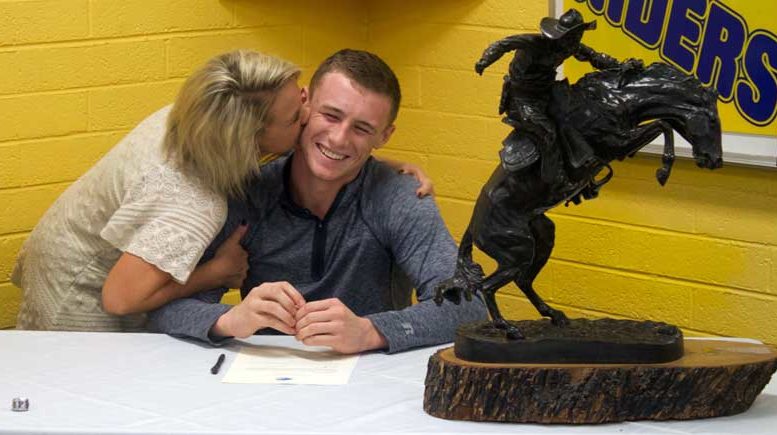 Jon Johnson Photo/Gila Valley Central: Ronna Lewis plants a smooch on her son, Ryne Lewis, after he signed his national letter of intent to wrestle for Notre Dame College of Ohio.

PIMA – It’s been quite a ride for Pima’s Ryne Lewis and now he is set to soar in the next phase of his wrestling and academic career as a Falcon at Notre Dame College in South Euclid, Ohio. 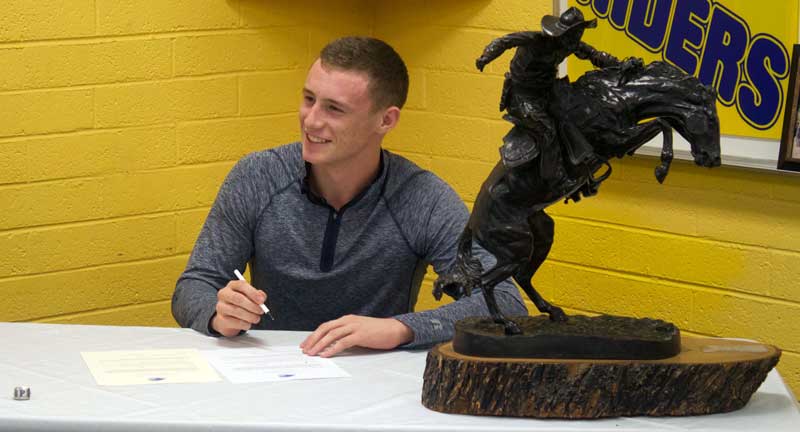 Lewis put pen to paper Wednesday afternoon and became just the second Roughrider in the school’s 25-year wrestling program history to receive a scholarship as he signed his national letter of intent to wrestle for Notre Dame College. He intends to major in physical therapy/sports medicine and has already begun that area of schooling through the local GIFT program. 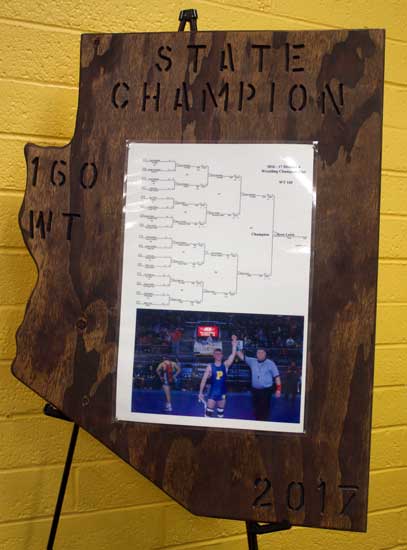 “I’m proud of him,” Ryne’s dad and coach, Sean Lewis, said. “He’s worked hard. It’s one of those sports where a college only gets nine spots for an entire program. So, to get into a college and get money for school, it’s tough to do.”

In front of family, coaches, wrestling teammates, friends, and the local media, Ryne, who fell in love with the campus during a recent official visit, didn’t hesitate to move forward with his chosen school and made it official.

He will report to Ohio in July, with mixed-blessings from his mom, Ronna Lewis, who planted a big smooch on her son during his signing.

“He was in fourth grade when he decided he wanted to become a college wrestler,” Ronna said. “He won one match that year . . . I’m so sad, but I’m also very excited. We’re going to have a lot of frequent flyer miles because we’re going to be in Ohio a lot.” 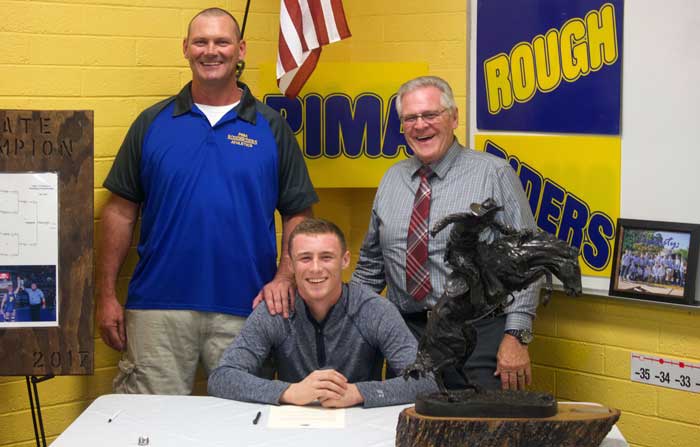 Jon Johnson Photo/Gila Valley Central: Sean Lewis, back left, and Digger O’Dell, back right, express their happiness for Ryne Lewis, center, after he signed his letter of intent.

It seems like a good fit for Ryne, who is a High School All-American and already owns two Pima records (most pins in a season: 27 in 2017 and most wins in a season: 57 in 2017) and finished in 6th place at U.S.A. Wrestling Nationals in 2016. Ryne has a current high school record of 149-18 (with 12 of his losses occurring his freshman year) has been named outstanding wrestler in six different tournaments, and after finishing 6th at state his freshman year and 3rd his sophomore year, he became a state champion wrestler in his junior year. Ryne still has his senior year to add to his high school accolades, but his longtime wrestling coach Digger O’Dell believes Ryne has what it takes to excel at the next level as well.

“The next step up is hard work and he’s a hard-working kid,” O’Dell said. “He will fit in, but it takes a tough kid to move up one notch. We have very few that have . . . It’s great for our sport (and) great for our community. We’re excited. He’ll be a great example and representative of our community.” 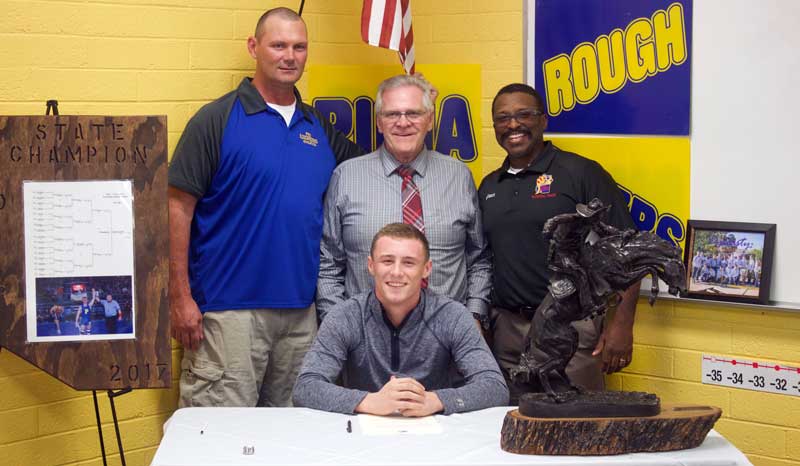 Safford wrestling coach Herman Andrews was at the signing and said he was proud of Ryne’s accomplishments and how he is representing the Gila Valley with his wrestling.

“I’m very excited because in this area we don’t have a lot of kids  (who) shed light to our sport, so any chance we get where a kid is going to step up and move on to the next level; it’s good for our area and it’s dang sure good for our sport,” Andrews said. “This is a great moment for us. I mean, it just is. You’ll see a lot more kids start buying in once they see what he is doing.”

Notre Dame College was founded in 1922 as a Catholic, four-year liberal arts institution for women and began admitting men in 2001. In 2012, the school became a full-fledged NCAA Division II member an participates in 22 men’s and women’s intercollegiate sports.