Contributed Photo/Courtesy Safford City-Graham County Library: The Danseries perform the Waltz of the Catrinas at this year's Day of the Dead celebration.

SAFFORD – A tradition going back hundreds of years, the Day of the Dead holiday celebrates the fond memories of loved ones lost. 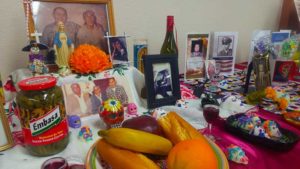 Brooke Curley Photo/Gila Valley Central: A table was adorned with food and photos of loved ones who had passed on in sweet remembrance.

The Day of the Dead, or Dia de Los Muertos, the celebration has become an annual occurrence at the Safford City-Graham County Library. Attendees were given the chance to remember their loved ones with a shared memorial table lit by candles while eating wonderful food and watching live historical performances. 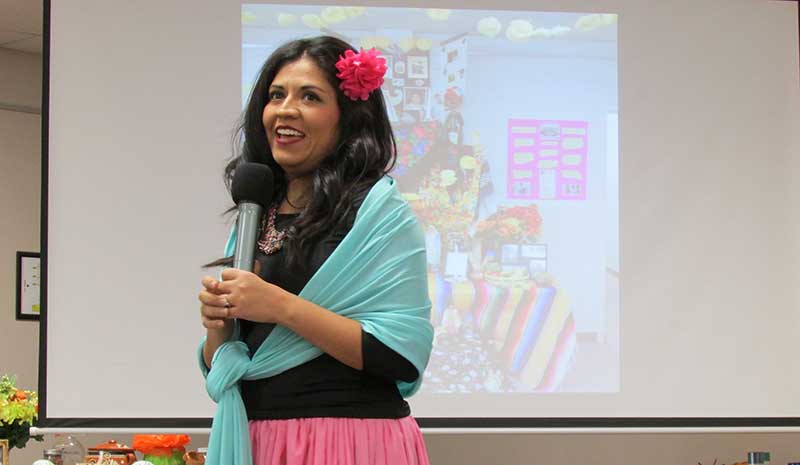 Multiple speeches and presentations were given to coincide with the music and dancing. Liz McCray of the Mount Graham Seed Savers organization addressed the crowd and spoke on the history and importance of seed saving. After the celebration, Gila Valley Central caught up with McCray, who said that she believed gardening and seed saving to be an important skill that should be passed down generations.

“The Day of the Dead is a day of remembering the life of our ancestors and the sacrifices that they have made for us,” McCray said. “It is about diversity and individuality. I often wonder a lot and wish I could have some one-on-one time with some of my ancestors. I would love to ask them for advice or to teach me some of the essential skills that they used in their everyday life. In our culture, these mastered skills are all but forgotten. While that might not be possible (speaking with ancestors), we can work to rescue that knowledge and share it with the living and we can then pass it on to future generations.” 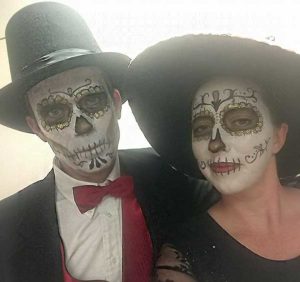 Contributed Photo/Courtesy Marcy Barney: Displaying their artful sugar skull face paint, the Barneys were one of the Danseries couples performing in the Catrinas Waltz.

After the introduction of the Seed Library, Gayla Curtis’ EAC Danseries performed the Catrina Waltz. Coinciding with the Day of the Dead celebration, the waltz is a historical piece which is a combination of the Mexican, and European cultures.

“I decided to do the Catrina waltz because it seemed to me to be the most typical of the kinds of things you could do on the Day of the Dead because it symbolized the coming together of all these cultures,” Curtis said. “The European, the native Mexican, and the observance of the Day of the Dead with painted faces and flowers. Rather than just picking a dance that is typical now in Mexican culture or a dance that was in Mexican culture in the past, this dance wrapped up all three aspects of what was going on during the Day of the Dead. And that’s why I chose the Catrina Waltz over others.”

Sally Holguin, who is the interim Library Director at this time, is usually is in charge of organizing the Day of the Dead celebration. However, this year will be her last time organizing the event because she will be retiring. Holguin expressed to Gila Valley Central her love of the event. Also, Holguin said that she was impressed with the number of people within the community who now come to the event.

“We started the program back in 2008, and we had maybe 20 people,” Holguin said. “So, to see the attendance now is very humbling and gratifying as we see the interest. Also, being able to educate the public as to the meaning of the traditions means a lot as well. I’ve loved it. This is something I’ve loved doing.”

Celebrating Día de los Muertos (Day of the Dead) is about honoring your heritage. It is a special time when families and friends gather to remember loved ones who have passed on.

Every Nov. 1-2 is filled with festivities and time-honored traditions in Mexico and around the world. These days also have separate names in the Catholic tradition, known as All Saints Day and All Souls Day.

As much as Día de los Muertos is known for its striking skull imagery, that does not mean the two-day holiday is somber. Food, fun and colorful altars are all part of the merriment.

Do you know what the most widely known symbol of the holiday is in the U.S.? It’s sugar skulls. These small molded skulls are decorated with colorful and intricate designs by everyone from children to adults.

If you’re celebrating in Mexico, the most widely known symbol of Día de los Muertos is pan de muerto, or Day of the Dead bread.

Day Of The DeadThe colorful altars, or ofrendas, you will see at Day of the Dead celebrations are decorated with special offerings for a loved one who has passed away. Treasured photos, candles and the person’s favorite food and drink bring these altars to life.

Brilliant yellow marigolds adorn many of the decorations, and they are the official flower of Día de los Muertos.

Brandon Nite and the Safford Library contributed the video for this article.

Safford Library to host ‘how to’ series this summer