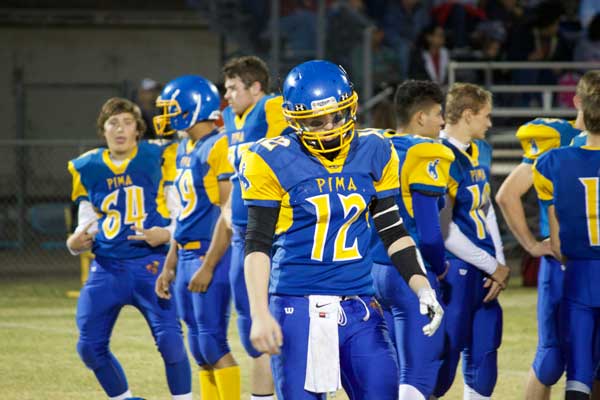 Jon Johnson Photo/Gila Valley Central: The Benson Bobcats ended the Pima Roughriders' season Saturday with a 35-20 victory in the state 2A quarterfinals.

PIMA – The No. 5 Benson Bobcats upset the No. 4 Pima Roughriders at Edd Hubard Field in Pima on Saturday, ending the Roughriders’ quest to repeat as champions while moving up to a higher division. By the time the final whistle blew and the tears started flowing, Benson reigned victorious in the 2A playoff quarterfinal, 35-20.

“We had a good season,” Pima head coach Jace Hancock said. “I’m proud of all of our players; they did well.”

Pima finished the season 9-3 with its only losses coming to three of the four teams left in playoff contention. 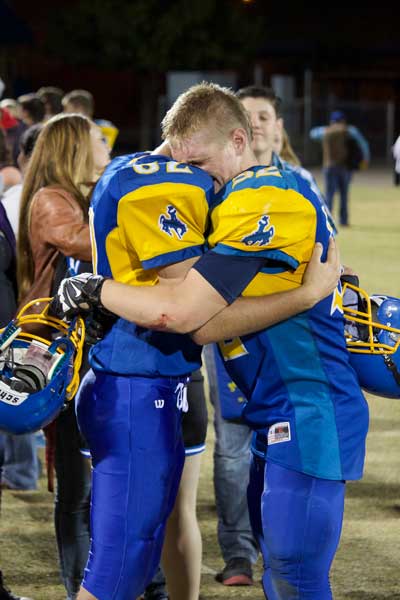 Jon Johnson Photo/Gila Valley Central: Ethan Claridge, left, and Hadley Schmidt console each other after their final high school football game was over.

“We exceeded a lot of people’s expectations,” Hancock said. “We wanted to be a contender, and I think we were there. We just fell short tonight.”

The excitement began with the opening kickoff as Benson’s Dondre Villalobos took took it back 40 yards close to midfield before fumbling it away. Pima’s Marcos Vargas recovered the ball, and the Roughriders were in good field position for its first drive.

After going backwards, Pima faced a third and 18 from its own 32 yard line when quarterback Josh Whitaker slung a pass to Justin Kartchner, who caught the ball in traffic after it bounced off a defender and raced 60 yards to Benson’s 12 yard line.

On fourth and 5 from the 8 yard line, Whitaker stiff armed a couple of defenders and took it around the right side for Pima’s first score.

Benson made more of its second possession, however, and utilized a pass interference call and 15-yard reception from Cade Curtis to set itself up on the edge of the red zone.

On third and 2 from the 22, quarterback David Arthur faked a dive handoff and then pitched it to Keegan Graf on the option, who took it down the sideline to the end zone. The extra point put Benson on top 7-6 with 2:06 left in the first quarter.

After three straight incomplete passes, Pima was forced to punt and Benson came up with the block, giving the Bobcats excellent field position at Pima’s 35 yard line.

The Bobcats capitalized on the turnover early in the second quarter as Arthur rolled out to his right and found Curtis open for 30-yard touchdown. Arthur finished the night 5-13 for 129 yards and two passing touchdowns.

After picking up first downs with passes to twins Justin and Jarrett Kartchner, Whitaker hit running back Manuel Rivera for a 20-yard touchdown. Whitaker finished the night 13-28 for 180 yards and had a touchdown each by passing, rushing and receiving the ball.

Benson came right back, and, after brushing off a Pima defender, Graf raced 35 yards to pay dirt, extending Benson’s lead at the half to 19-12.

Benson finished the first half with three touchdowns, two punts and a fumble on its six possessions, while Pima finished with three punts (one that was blocked) and two touchdowns on its five possessions.

Pima moved the ball well on its opening possession of the third quarter and after back to back 15 yard receptions by the Kartchner twins, it was back in business and threatening inside the red zone.

The Roughriders failed to convert on fourth down and 11, however, and turned the ball back over to the Bobcats.

The Pima defense, led by the hard-hitting play of Hadley Schmidt, held the Bobcats to a three and out.

Pima reached into its bag of tricks on its next possession as running back Emilio Molinar took the handoff from Whitaker and then threw a halfback pass back Whitaker as he sauntered down the left sideline. Whitaker caught the pass and out raced the defense 39 yards to the end zone. A 2-pt. conversion pass to Justin Kartchner was good and Pima went up 20-19 with 3:58 left in the third quarter.

Jon Johnson Photo/Gila Valley Central: Joshua Whitaker (12) races down the sideline for a touchdown after catching a halfback pass.

After forcing a punt, Pima got the ball back but soon gave it back when Trey Thompson coughed up the football for Pima’s only fumble on the night.

Benson capitalized on the turnover as Arthur managed to somehow get rid of the ball away before being slammed. Arthur’s pass made its way into the bread basket of Tyson Coleman, who held on for a 35-yard touchdown.

The 2-point conversion was good and Benson went up 27-20 with 11 minutes left in the game.

Pima drove back down the field and was looking to retake the lead when it suddenly hit a brick wall of defense. Facing fourth and 4 with 5:07 left in the game, Pima attempted its quarterback draw, but Benson was on a pressure play and stuffed it.

“We were trying to bring some pressure anyway and it just happened to work out,” Benson head coach Chris Determan said. “Sometimes you make the right call and sometimes you don’t. On that one, we did.” 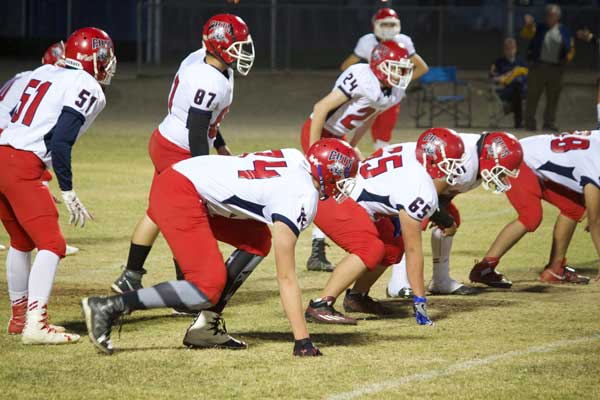 Jon Johnson Photo/Gila Valley Central: The Benson Bobcats move on to the state semifinals after beating Pima on Saturday, 35-20.

On the very next play, Benson sealed the game as fullback Brandon Laird, who had been held in check all game, burst through the right side and raced 60 yards before diving into the end zone for the game’s final touchdown.

Lair then added the 2-point conversion for good measure and Benson ended Pima’s push into the playoffs, 35-20.

“They were a good team,” Hancock said. “They came to play. They scouted us well (and) stopped a lot of our plays.”

Benson will face No. 1 Round Valley in the semifinals at Fountain Hills High School at 6:30 p.m. on Saturday. Round Valley is undefeated and dispatched No. 9 Paradise Honors 45-0 in the quarterfinals.