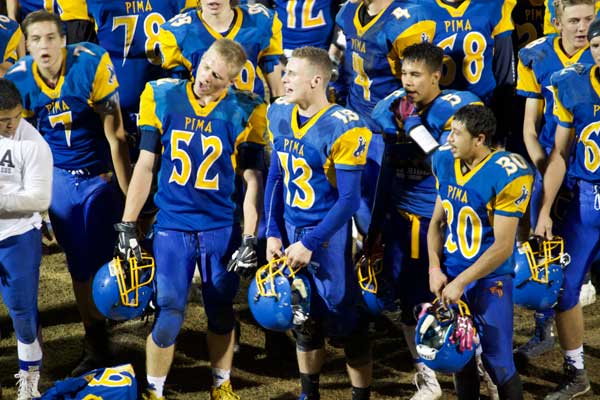 PIMA – After being pelted by Mother Nature the previous day, the #4 seed Pima Roughriders pounded the visiting #12 seed Gilbert Christian Knights 49-13 in the opening round of the 2A state playoffs at Ed Hubbard Field on Saturday.

The field itself was flooded on Friday, and Pima practiced in its gymnasium. Workers from the town of Pima spent most of the day Saturday getting the field into playable shape so the game wouldn’t have to be played in Fort Thomas, the team’s contingency field.

There were definitely a lot of slips and the field became a caked muddy mess by the end, but football is meant to be played in outdoor conditions, and both teams had to adapt to the situation, according to Pima head coach Jace Hancock.

“I’ve seen football played in snow and rain and other conditions,” he said. That’s just how you play football . . . We dragged it and tried to dry it. You can still tell it’s real muddy, but it was decent enough to play on.”

Once again, Pima’s defense dominated the action, holding Gilbert Christian to eight straight possessions without scoring. When the Knights finally got on the board, it was against some reserves late in the fourth quarter, well after the game had been decided. Those first nine possessions ended in six punts, a turnover on downs and two interceptions.

With Gilbert Christian playing a zone to stop Pima’s vaunted aerial attack, the Roughriders took what was given and ran roughshod over the defense. 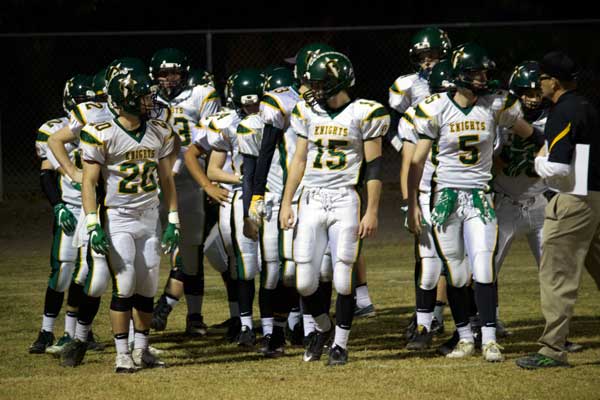 Pima owned the time of possession in the first quarter, and finished its first drive on a 12-yard touchdown run by Emilio Molinar.

After Gilbert Christian was forced to punt, Pima again controlled the ball as it methodically ran down the field. At the beginning of the second quarter, Whitaker bowled his way over defenders, dragging some six yards on his way to a 9-yard touchdown run.

Later in the second quarter, Joshua Whitaker easily scored from the 1-yard line after a big pass to Jarrett Kartchner initially set them up at the 3. Whitaker finished the night 9-15 for 109 yards, one touchdown and one interception through the air to accompany his two rushing touchdowns and big night running the ball.

Pima’s only mistake of the first half came on a botched kickoff attempt that netted -3 yards. The play seemed to ignite the Knights’ spirit, as they were given their best field position of the contest to that point.

A 28-yard pass from Kyle Patterson to Caleb Young then set the Knights up at first and goal from the 10. On second down, however, Molinar ended the threat by intercepting Patterson in the end zone. He returned the ball to the 30, and Pima went into halftime with a  22-0 lead.

The Knights went three and out to start the third quarter when Trey Thompson made a nice play on the ball to break up Patterson’s pass.

The ensuing punt was shanked and only netted 18 yards as Pima opened the second half with excellent field position at Gilbert’s 28 yard line.

Pima took advantage and Whitaker hit Jarrett Kartchner for a 12-yard touchdown. Rivera ran in the 2 point conversion and Pima was up 30-0 with about nine minutes left in the third.

It looked like Pima had yet another three and out but Gilbert Christian went for it on fourth and 15 from its own 20 yard line and punter Caleb Young hit Patterson, who just picked up the first.

The pickup was for naught, however, as two plays later Aaron Judd intercepted Patterson and took it 42 yards to the house for the defensive score.

The Knights threatened to score late in the third, however, on fourth and goal from the 4, Hadley Schmidt and Marcos Vargas converged on Patterson and ended the threat with a sack.

Pima once again moved the ball down the field in the fourth quarter with reserves in at quarterback and other positions, and Molinar capped off the drive with a 10-yard jet around the right side for his second touchdown on the night, and Pima was up 43-0 with under 7 minutes to play.

The Knights then had their play of the game as Patterson hit a wide open Young after the Pima defender fell down.Young took the offering all the way to pay dirt for the 52-yard score.

Pima wasn’t quite finished with the highlights as Henry Boswell took a handoff and broke free down the left side to the 3 yard line for a 50-yard pickup.

Boswell was rewarded for the run with the next touch and he finished the job by scoring Pima’s last touchdown of the night.

Playing in his last high school game, senior running back and wide receiver Caleb Young never quit and peeled off a big run to put the Knights into Pima’s territory. Young then finished the drive with a 30 yard touchdown reception as he snagged Patterson’s pass for the last score of the night. It was a little too late, however and Pima took the victory, 49-13. 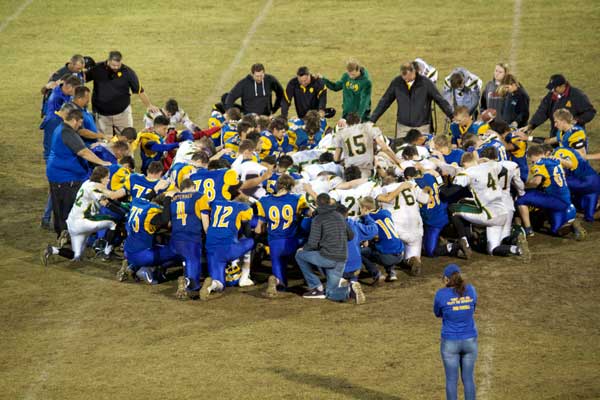 Having to travel to Chandler in its opening game due to #3 Thatcher not being its section’s champion like #14 seed Chandler Prep might have given the Eagles extra ammunition it didn’t need.

The game, which was played at Seton Catholic High School in Chandler, was never in question.

After tying the game up early 7-7 in the first quarter, the might of Tucson Sabino shone through and ended Safford’s season in the first game of the 3A state playoffs.

The Bulldogs ended their season with a 5-6 overall record but were 3-2 in their section.