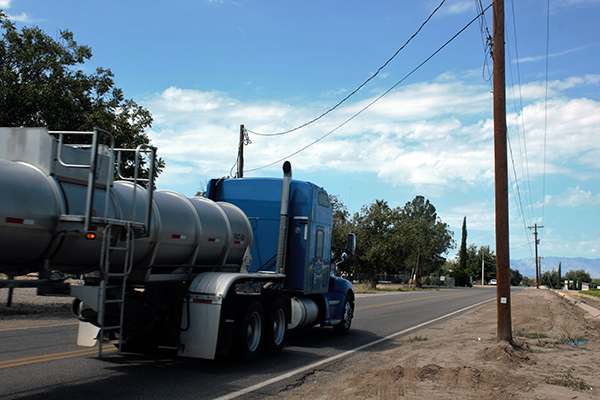 CENTRAL – A low-lying power line was said to be the culprit in an incident resulting in a broken utility pole adjacent to Norton Road on Wednesday morning.

According to the deputy’s report, a semi-truck was eastbound on Norton Road in route to Freeport McMoRan’s Safford Operations mine site when the top of his rig got caught up in the low-lying cable. The cable previously strung across Norton Road was measured at just nine feet off the ground. 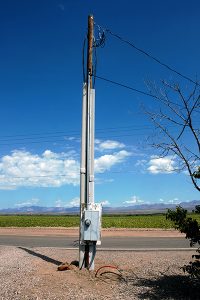 Jon Johnson Photo/Gila Valley Central: This utility pole replaced one that broke when a low power line was snagged by a semi-truck.

Semi-trucks heading eastbound toward the mine or westbound leaving the site utilize Norton Road – along with Reay Lane and Safford/Bryce Road – to traverse the distance from the mine site to U.S. Highway 70.

The driver of the semi said he saw the cable and attempted to stop but could not do so in time. The cable got caught in the truck’s running lights and horn, and the force pulling on it was great enough to cause the utility pole to snap. The deputy examined the pole and said it appeared to be rotted in the middle.

Residents along Norton Road have complained about the presence of the trucks and said they continuously speed through their neighborhood without concern for those living there. On Wednesday, multiple comments were posted on social media websites expressing anger toward the semi-trucks.

The Sheriff’s Office has responded to speed complaints about the trucks, but Sheriff P.J. Allred and Undersheriff Jeff McCormies have stated that commercial vehicles appear to speed less than residential vehicles.

Gila Valley Central examined the site for about 30 minutes on Friday and witnessed three semi-trucks traverse the area in that timespan. Out of the three, two of the trucks appeared to be adhering to the posted speed limit of 25 mph in the area, while a third was obviously exceeding that amount.

That being said, McCormies previously said he could not recall any speed-related crashes regarding commercial trucks on Norton Road during his employment with the Sheriff’s Office.

In September, 2011, however, a semi-truck flipped over while attempting to pass a pickup truck on Safford/Bryce Road and spilled molten Sulphur, causing the roadway to be closed for 13 hours.

On Wednesday, the cooperative finished replacing the pole without incident and increased the height of the power line crossing Norton Road. No citations were given to the truck driver.