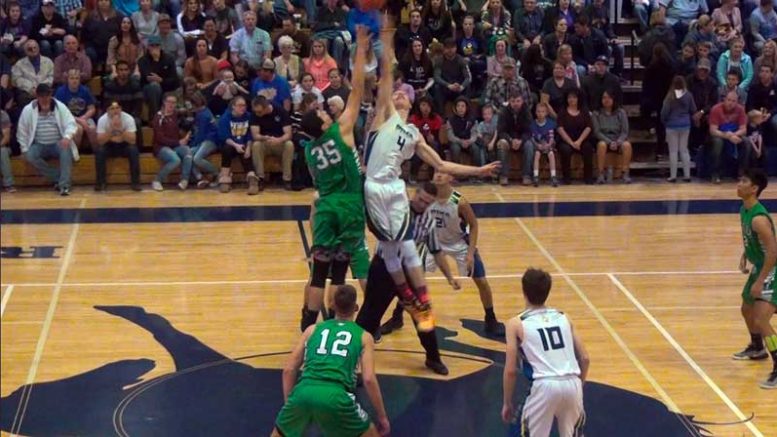 Jon Johnson Photo/Gila Valley Central: The Pima Roughriders and Thatcher Eagles faced off in the game of the year in the Gila Valley on Friday, with Pima prevailing, 44-39.

PIMA – The math was easy for Pima – beat Thatcher and be crowned regional champions. The not-so-easy part was getting that elusive win over a team that Pima hadn’t beaten in its own gymnasium under longtime head coach Cliff Thompson.

For Thatcher, the Eagles hoped the third time was the charm after falling in overtime the last time the two teams met on the hardwood.

The gym was packed with fans so much it made the fire marshal on the edge of the court sweat like a sinner in church. The air was electrified with fans from throughout the Gila Valley who came to witness the game of the year, and a local radio personality got goosebumps after hearing the National Anthem sang to perfection. 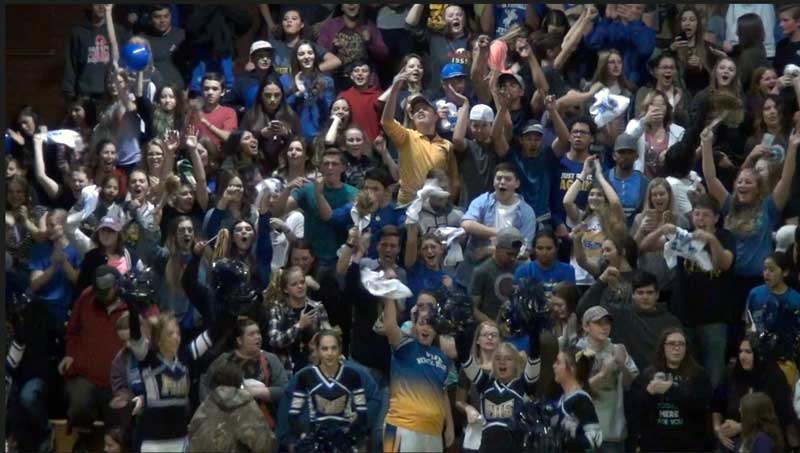 It was hometown Americana at its best and in the end, after a furious rally that emboldened the visitor stands and caused the home team’s grandmothers to clutch their pearls, Pima got the win, 44-39.

The opening period saw five lead changes and the game had five ties throughout. But in the end, down four points with just 17 seconds to go, Thatcher couldn’t quite pull off the comeback and Pima kept its unblemished regional record intact.

Thatcher gathered the opening tip and immediately went into its isolation game plan, attempting to draw the larger Pima players out past the three-point arc to then drive by them. Logan McMaster broke the ice by hitting one of two free throws, and Thatcher’s collapsing zone defense forced a turnover on Pima’s first offensive foray. 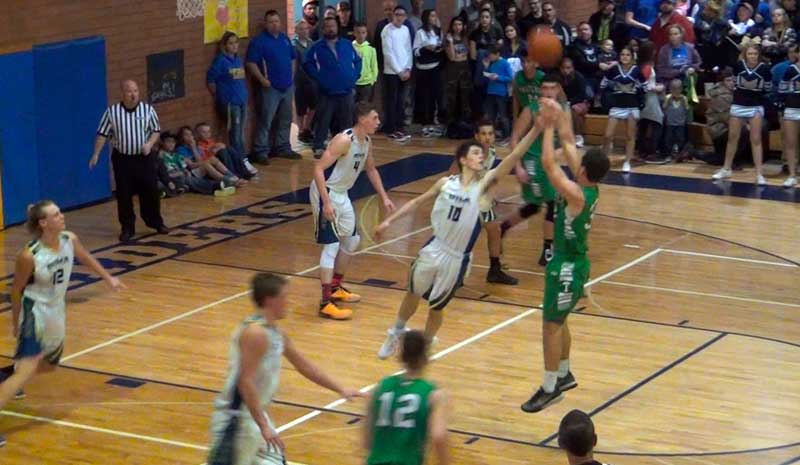 On its next possession, Pima point guard Trey Thompson hit a 3-pointer from the left corner and the game saw its first of five lead changes in the period.

Carson Goodman had the answer with his own 3-pointer from the left corner, as Goodman helped provide Thatcher’s theme for the game as nearly every time Pima got a bit of a lead an Eagles player would even things back up with a long ball. Goodman finished with five 3-pointers, although the one to start the third period was inside the 3-point line. He would make up for it by shooting one from Fort Thomas later. Officially, he finished with 17 points. 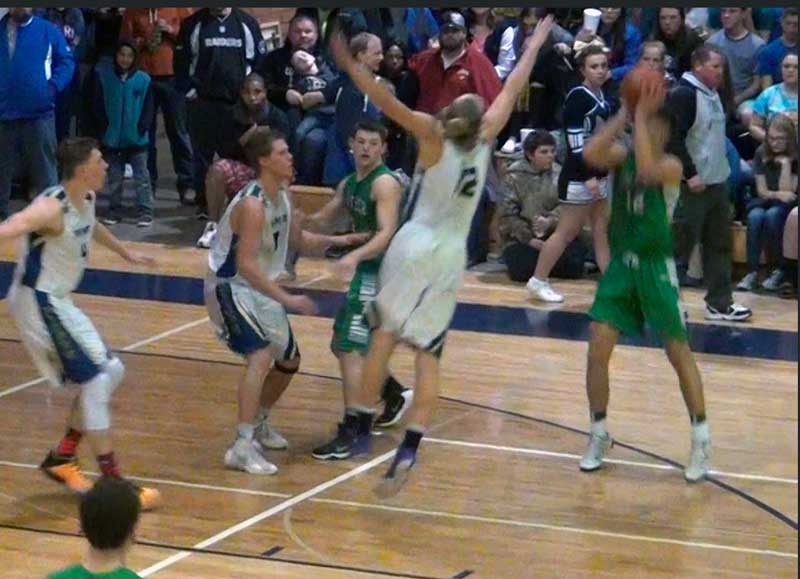 Jon Johnson Photo/Gila Valley Central: Carson Goodman was awarded three points on this two-point field goal, but he would make up for it later by hitting one from beyond NBA territory.

“We’re extremely proud of the effort,” said Thatcher head coach Chris Cook. “The kids played hard. I thought Carson shot the ball pretty well tonight. He’s been injured a little bit, so it was good to see him give it a go and be real productive tonight.”

After both teams traded missed jumpers, Trey Thompson drove into the heart of Thatcher’s zone in transition and scored. It would be one of the few fast-break type of opportunities Pima made good on after getting more than 20 fast-break points versus Safford the previous night.

Thatcher’s big man Cole Motes stepped out and hit a 3-pointer from the top of the key to give Thatcher the lead, 7-5, but it was the last lead of the half for the Eagles, who clawed and scraped back all night. 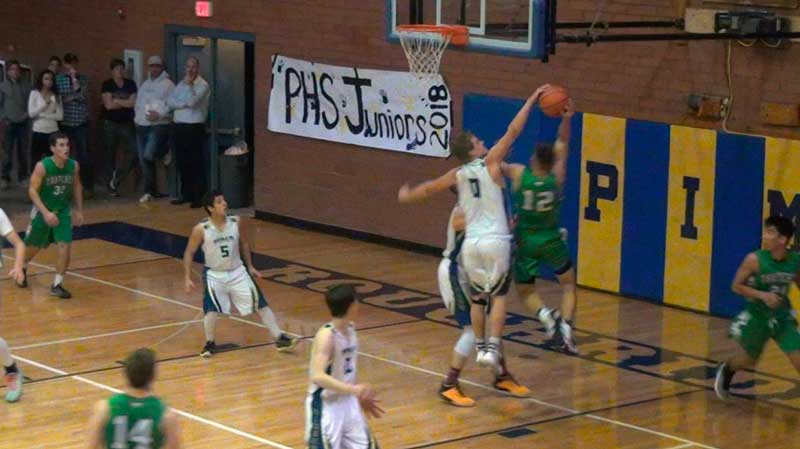 Like two heavyweight fighters, the teams stood there and hit each other over and over until the buzzer signified the end of the first period, with Pima clinging to a one-point lead, 11-10.

“They like to slow it down, and they did a good job of that, but I think we played really good defense,” coach Thompson said.

The second period went much like the first, with Thatcher’s Dallin Cook hitting a 3-pointer to tie the game at 13-13 and Goodman hitting his own 3-pointer to tie it up again at 16-16. With time running out in the half, however, Pima’s Alek Pruszynski got the last laugh by swishing a 3-pointer from the left corner, and Pima went into the locker room with a 21-18 lead.

Thatcher opened up the third period with back-to-back buckets by Goodman and Cook, who’s wild scoop shot gave Thatcher its last lead of the game, 22-21. The aforementioned Goodman’s shot was later deemed a 3-pointer and was added that way with Pima up 25-22, when Motes hit a jumper from the free throw line and the official scorer inexplicably added three points to Thatcher’s total. Pima coach Thompson inquired why, and the referees said Goodman’s earlier shot was a 3-pointer and that’s how it went down in the scorers’ books.

Tied at 27-27 late in the third, Pima’s Jarrett Kartchner went on a personal 12-2 run over Thatcher for the rest of the period and half of the fourth after being double- and triple-teamed all night. Despite the tough collapsing defense, Kartchner still finished with a game-high 20 points, eight of them coming in the fourth period. With Pima up 39-29 with 3:24 to play, It looked like all was lost for Thatcher, but someone must have forgotten to tell the Eagles. 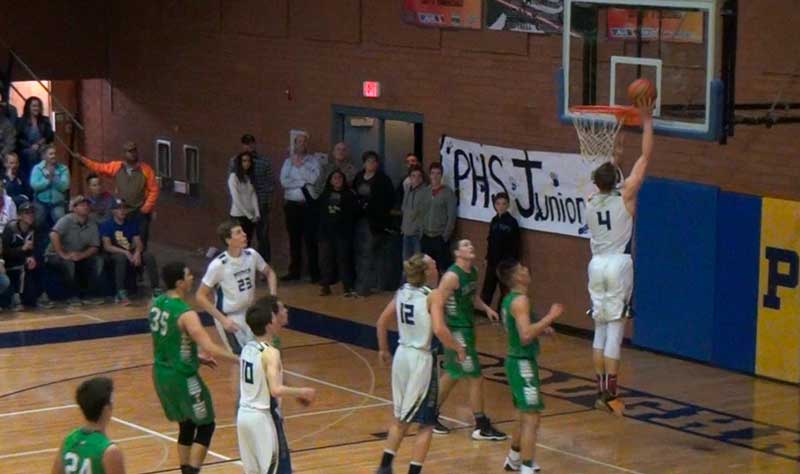 With less than three minutes left, Goodman hit a 3-pointer to cut Pima’s lead to 39-32. Kartchner then scored on a rebound put back but failed to complete the 3-point play as he was fouled in the process. 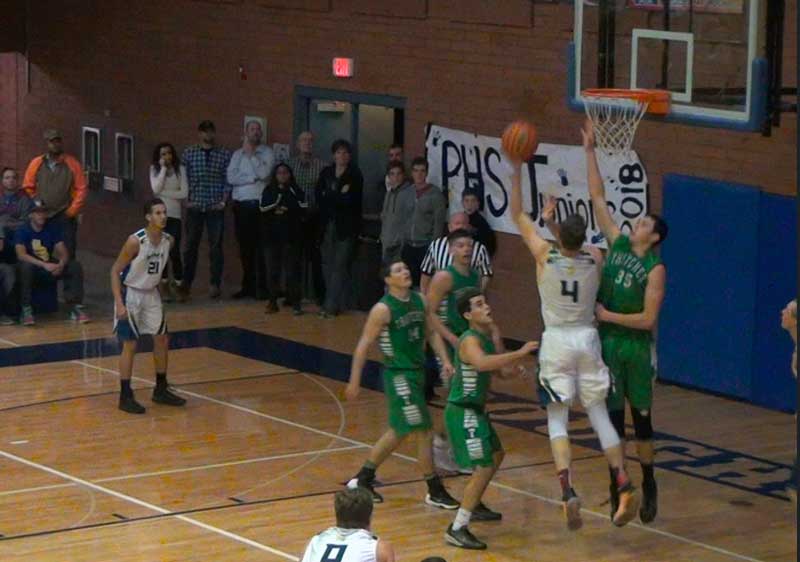 Down nine with 1:27 left, Goodman poked the ball away from Thompson in the back court and Logan McMaster scooped it up and put it in the hoop. After another turnover, McMaster then hit a pull-up jumper to bring Thatcher within five points, 41-36, with just 27 seconds left to play.

Thompson was fouled and cooly put in both shots.

Goodman followed that up with an NBA-range 3-pointer that left Alek Pruszynski shaking his head. The lead had shrunk to 43-39, but there were only 17.2 seconds to play.

“That’s something you (have) to deal with with Carson,” coach Thompson said. “He can knock down deep shots from time to time.” 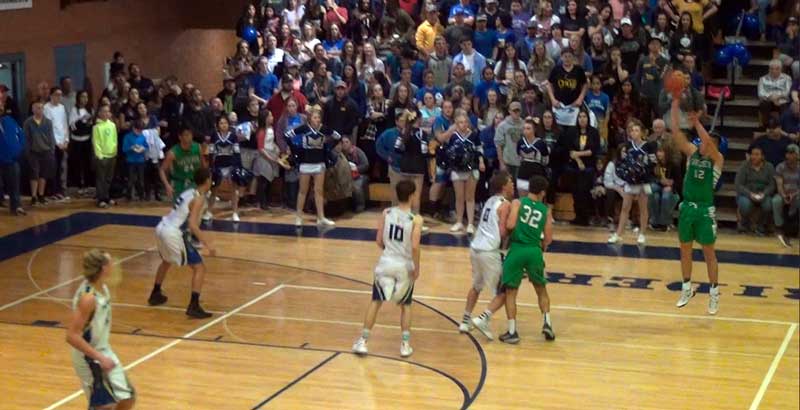 Jon Johnson Photo/Gila Valley Central: Carson Goodman hits from beyond NBA territory near the end of the game.

After Alek Pruszynski missed on the front end of his one-and-one free throw, Thatcher rebounded the ball but just stepped out of bounds as the players raced down the court.

Thompson then dribbled most of the time away as Thatcher raced around desperately trying to foul. Thompson hit the front end of his one-and-one free throw and Pima prevailed, 44-39.