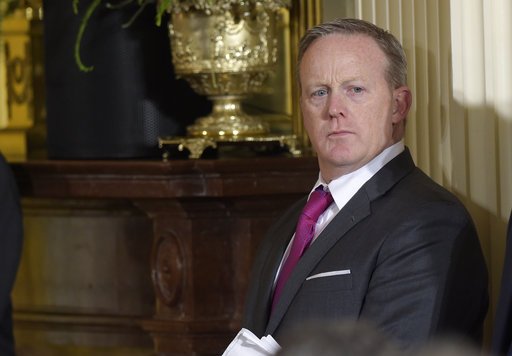 White House Press Secretary Sean Spicer waits for the start of a news conference with President Donald Trump and Colombian President Juan Manuel Santos in the East Room of the White House in Washington, Thursday, May 18, 2017. (AP Photo/Susan Walsh)

WASHINGTON (AP) — To the White House and its supporters, the big story in Washington isn’t the investigation into possible Trump campaign ties to Russia. It’s about leakers working to undermine the president.

“SABOTAGE,” read the subject line of emails sent out by President Donald Trump’s re-election campaign and the Republican Party, which pointed to “people within our own unelected bureaucracy that want to sabotage President Trump and our entire America First movement.” Trump tweeted Thursday that he’s facing “the single greatest witch hunt of a politician in American history!”

The language reveals much about how Trump and his backers are explaining the seemingly never-ending blitz of bad news rocking the White House. As Democrats talk about possible obstruction of justice and dream of removing Trump from office, the president and his allies reject that he bears responsibility for his woes. They see a plot to undermine him at every turn, as evidenced by the anonymous sources disclosing the embarrassing and damaging information — some of it classified.

All administrations have to deal with leaks, from the release of the Pentagon Papers on Vietnam policy to Edward Snowden’s dump of national security files. But the scope and frequency experienced by the Trump White House is remarkable.

In addition to an endless stream of gossip and internal squabbling, news outlets have been privy to everything from details of draft documents to the president’s private phone conversations with foreign leaders. This week came reports that the president had shared highly classified information with Russian officials during an Oval Office meeting, revealed by those with knowledge of the conversation.

“This has all the markings of a coordinated, silent coup,” said Michael Caputo, who worked on Trump’s campaign and keeps in touch with administration officials.

Leaks are hardly the only cause of Trump’s problems — the uproar over FBI Director James Comey’s dismissal wasn’t the result of a leak. But Trump-friendly talking heads see something that stretches the realms of believability. Far-right radio host Alex Jones warns of a plot by “deep-state” globalists to impeach Trump. On Fox News, Sean Hannity warned Wednesday of a “destroy Trump alliance” that is now “aligning to take down President Trump.”

But even if some claims go too far, Trump clearly does face opposition from within his own government. Running on a pledge to tear apart Washington, Trump still depends on Obama administration holdovers and career government employees, many of whom oppose him.

Clashes among Trump aides also create an environment in which staff leak to undercut rivals. 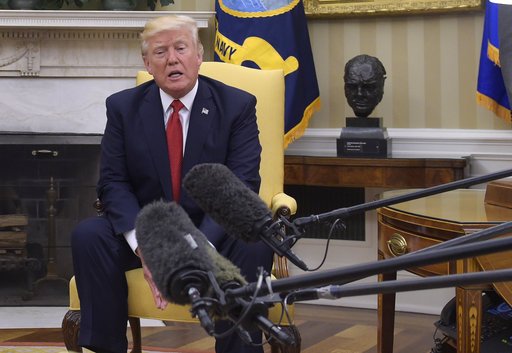 President Donald Trump speaks in the Oval Office of the White House in Washington, Thursday, May 18, 2017, during his meeting with Colombian President Juan Manuel Santos. (AP Photo/Susan Walsh)

Ari Fleischer, who served as press secretary to President George W. Bush, blamed Trump for creating an environment that promotes leaks, saying that starts at the top.

“I do think there is a serious problem with leakers inside the administration and holdovers who can’t stand the president and will do anything they can to hurt him. Leaks are a real problem,” he said. “But Donald Trump created many of these problems for himself.”

A sense of fatigue and despondence has set in as White House officials wait for new balls to drop. Again and again, they have tried to push forward with their agenda, only to see news reports dominated by near-daily leaks.

“Somebody is selectively leaking information and facts. And there’s a reason it’s selective,” said White House press secretary Sean Spicer, who once demanded that staffers turn over their cell phones so he could inspect them for unauthorized communication. “It’s because they’re trying to create … at least it appears as though somebody is trying to create a narrative or a problem.”

The focus on leaks has also been embraced by Republicans in Congress, who have urged reporters to pay more attention to the source of their stories — a familiar strategy to deflect the conversation away from bad news.

In many cases, Trump aides have leaked gossip to cement their public standings or tried to communicate with the president through news stories, which he devours.

Erick Erickson, a conservative activist who has been critical of the president, recently wrote that because the notoriously thin-skinned president doesn’t like internal criticism, some aides “are left with no other option but to go to the media, leak the story, and hope that the intense blowback gives the president a swift kick in the butt.”

White House officials have not said whether there is a leak investigation going on. But they’re not the first to rail against leaks and leakers — or try to root them out.

In 2013, for instance, the Obama Justice Department secretly obtained two months of phone records for reporters and editors of The Associated Press, which appeared to be linked to a criminal investigation into leaks about a foiled terrorist plot to bomb an airliner.