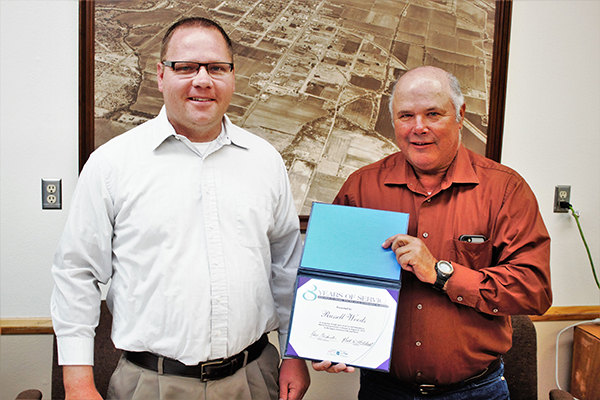 PIMA – After serving on the Pima Town Council for nearly a decade, Councilors Russell Woods and Tom Claridge are hanging up their nameplates.

The pair were recognized by the council at its Sept. 6 meeting, where Vice Mayor Dale Rogers presented Woods with a certificate honoring his eight years of service. Claridge, who has been out of town on business, wasn’t present at the meeting but was alluded the same recognition.

Woods said he appreciates those in the community who step up and act when necessary.

“You’ve got people out there that just step forward all the time,” he said. “I’m just glad that they do.”

The men were both voted into office Sept. 2, 2008. Woods, the top vote-getter, was actually sworn in Oct. 7, 2008, to complete the term of Ryan Cluff, who resigned because of health issues. Cluff himself was appointed to the council to replace Councilor Vaughn Grant, who resigned in February, 2008. 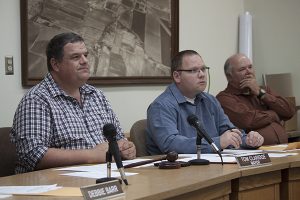 Woods and Claridge, along with Carter McCuen, were then sworn in to their four-year terms at the council’s December, 2008 meeting, and Woods was unanimously selected by the council to become mayor.

Claridge also served as mayor after former Mayor George Lemen took ill and had to resign. Lemen served as mayor from December, 2010 to August, 2014. He recently passed away.

Claridge stepped up as interim mayor after Lemen resigned and was given the permanent seat Dec. 2, 2014, after being unanimously voted in by the council.

While he will no longer be on the town council, Woods said he plans to remain active in the community and won’t be a stranger to events he normally participates in, including the annual Pima Heritage Days festival, where he and his wife, Jonnet, make their famous Dutch oven biscuits.

“We’ll be at all the events helping out,” Woods said. “The chuck wagon cook-off and that kind of stuff; I want to support that, and I want to be out there doing that too . . . It’s going to be fun.”