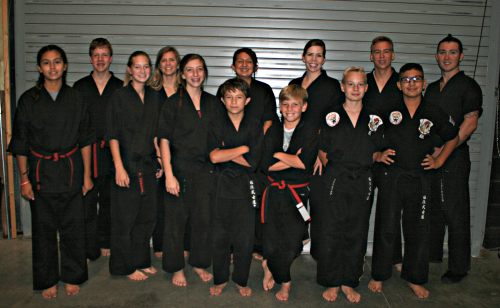 SAFFORD – Confucius said it doesn’t matter how slowly a person advances, so long as one doesn’t stop. On Saturday, the students of Extreme Martial Arts held a black belt ceremony celebrating how they didn’t stop short of attaining their goals. 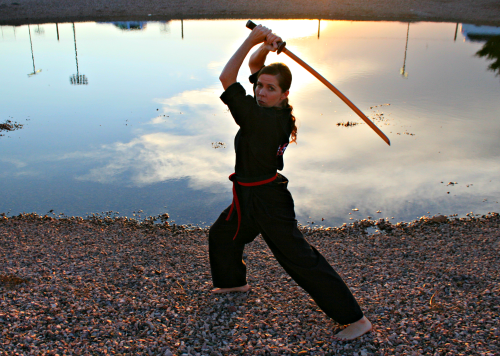 Brooke Curley Photo/Gila Valley Central: Heather Bull poses with a sword outside the David M. Player Center for the Arts before the black belt ceremony.

“It’s neat to see everybody achieve their goals,” Jones said. “Every class is challenged a different way. We have people (who) are tested a lot of times, and we like to challenge them in different ways. Sometimes things are out of the norm, and it’s not something they’re used to, but it’s a challenge to see how they adapt to it.”

Heather Bull, one of the adults who was awarded a black belt, was completely thrilled with the fact she had achieved her goal. Bull has been practicing Karate for five years.

“Achieving the goal, getting to the point where I did it, that feels unimaginably good,” Bull said.
“Everybody can do it. Come out (and) join us. This is a lot of fun, and it’s a great experience.” 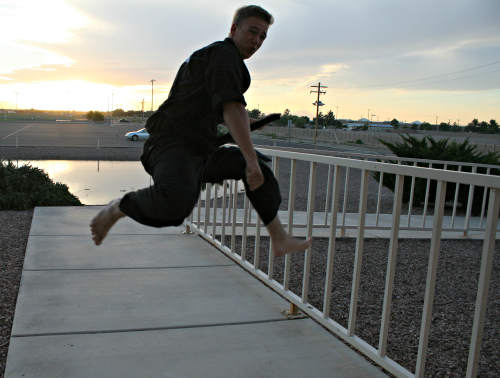 Conner McBride, who has been studying karate since he was 4 years old, said his times practicing were times in which the family bonded.

“The best part is that I get to do this with my family,” McBride said. “The black belt exam was the hardest part.”

The younger students were all very excited about receiving their belts. Many said the most difficult part of their studies was the black belt exam. The 12-hour exam consisted of a 2-mile run, 10 pull ups, 40 sit ups, and 25 push ups.

Samantha Luz, who is one of the graduates, is also on the studio’s performing team.

“It’s more exciting than hard,” Luz said. “I’ve been doing Karate for six years. (It’s fun having) friends and learning new kicks and forms and stuff. Whenever they perform somewhere, I perform with them. Come do Karate, it’s super fun, and it’s worth all the time and effort you put into it.”

High-kicking fun reaches a new level at the Safford Library