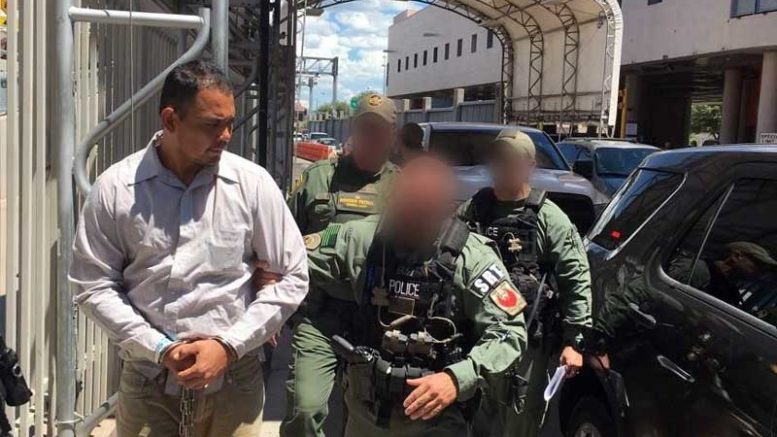 Contributed Photo/Courtesy ICE: Ysidro Mendoza-Guzman, 33, is transferred to Mexican authorities. Mendoza-Guzman was wanted for murder in Mexico after allegedly killing a man with a rock and fleeing the country. Mendoza-Guzman was detained in federal prison for illegal entry and has been removed from the U.S. multiple times.

Ysidro Mendoza-Guzman, 33, was transferred to the custody of representatives from Mexico’s Procuraduria General de la Republica (PGR), and Mexican immigration officials, by ERO Special Response Team (SRT) officers at the Nogales DeConcini Port of Entry. He came into ICE custody on July 7 following his release from federal prison. 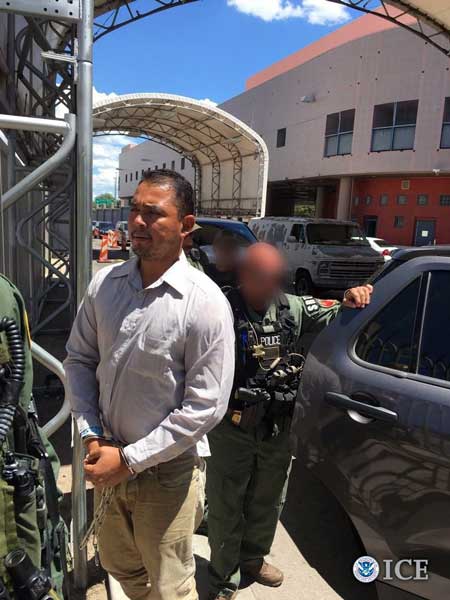 Contributed Photo/Courtesy ICE: Ysidro Mendoza-Guzman, 33, is transferred to the custody of Mexican authorities.

According to the Mexican arrest warrant, the murder occurred June 26, 2014, in the state of Michoacán after Mendoza-Guzman got into a violent argument with another man at a party. The altercation escalated and Mendoza-Guzman allegedly threw a rock at the man, striking and killing him. Witnesses say Mendoza-Guzman then jumped into the victim’s vehicle and fled the crime scene.

“ICE is committed to removing dangerous foreign fugitives from the United States who are being sought in their home countries for serious crimes,” said Henry Lucero, the field office director for ERO Phoenix. “Due to the continued cooperation between the United States and the Mexican government, this criminal alien was safely returned to his home country where he will face justice.”

Relevant Department of Homeland Security databases indicate Mendoza-Guzman has been removed from the U.S. multiple times dating back to 2014. In June, he was federally prosecuted for illegal entry, resulting in a 30-day prison term. Following his release from federal prison, ICE was able to reinstate his prior order of removal, paving the way for Tuesday’s repatriation.

Since Oct. 1, 2009, ERO has removed more than 1,700 foreign fugitives from the United States who were sought in their native countries for serious crimes, including kidnapping, rape, and murder. In the fiscal year 2016, ICE conducted 240,255 removals nationwide. Ninety-two percent of individuals removed from the interior of the United States previously had been convicted of a criminal offense.

ERO works with the ICE Homeland Security Investigations (HSI) Office of International Operations, foreign consular offices in the United States, and Interpol to identify foreign fugitives illegally present in the United States. Members of the public who have information about foreign fugitives are urged to contact ICE by calling the ICE tip line at 1-866-347-2423, or internationally at 001-1802-872-6199. The public may also submit a tip online by completing ICE’s online tip form.