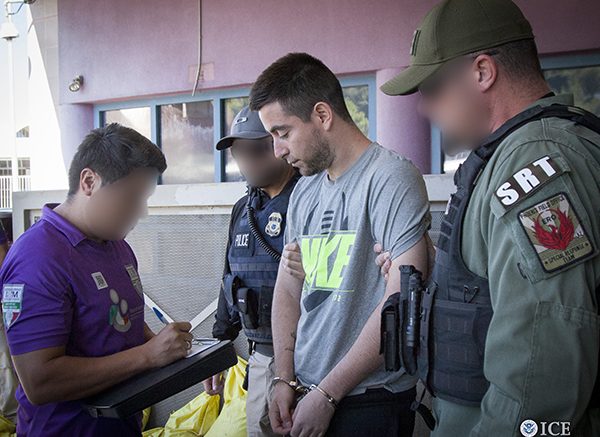 PHOENIX – A Mexican national wanted for homicide in his native country was turned over to Mexican law enforcement officials Tuesday by U.S. Immigration and Customs Enforcement (ICE) at the Nogales Port of Entry.

Luis Raul Quiroz-Gongora, aka “El Zorro,” 29, was transferred by ICE Enforcement and Removal Operations (ERO) officers to the custody of representatives from the Mexican Attorney General’s Office. An arrest warrant issued in November 2013 by a judge in Sonora, Mexico, charges Quiroz with murder. According to the Mexican warrant, Quiroz and another individual allegedly shot and killed a Sonora resident.

On Feb. 11, Quiroz was arrested by local law enforcement in Pima County on drug charges. Subsequently, ERO placed a detainer on Quiroz, who was then turned over to ERO and placed in removal proceedings. On April 19, an immigration judge ordered Quiroz removed to Mexico. Just days later, Quiroz was remanded to the custody of the Pima County Sheriff’s Office on a warrant stemming from the original drug charges. Quiroz was ultimately convicted June 30 of facilitation to transport marijuana for sale and sentenced to 150 days in jail, with a credit for time served. Upon completion of his sentence, Quiroz was turned back over to ERO paving the way for Tuesday’s removal.

“The return of this fugitive to face homicide charges in Mexico is a direct result of the ongoing cooperation between ICE and our local law enforcement officers,” Enrique Lucero, field office director for ERO Phoenix, said. “Dangerous criminals who believe they can escape violent charges by fleeing to the U.S. should be on notice that they cannot seek refuge in our communities.”

Since Oct. 1, 2009, ERO has removed more than 1,789 foreign fugitives from the United States who were sought in their native countries for serious crimes, including kidnapping, rape and murder.