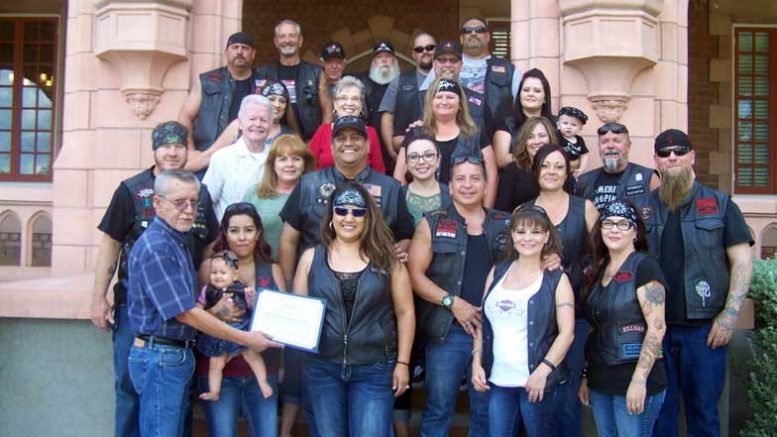 Contributed File Photo/Courtesy city of Safford: Safford Vice Mayor Richard Ortega presents the Pride of Safford Award to the FFF Clubhouse motorcycle riders group in 2016. On Saturday, the group was performing a ride for a fallen biker when several motorcycles crashed.

PIMA – Multiple motorcycles were involved in a crash Saturday during a memorial ride for a fallen biker. A female passenger was was airlifted to Banner-University Medical Center Tucson as a result of the crash, where she was treated and released.

Brenda Watts, 39, of Safford, was a passenger on a Yamaha V-Star motorcycle operated by Jason Roach, 39, of Safford. She was injured when Roach laid the bike down to avoid colliding with other motorcycles that were in a procession heading from Safford to Fort Thomas and back. The crash occurred at about 11:30 a.m. while the procession was westbound on U.S. Highway 70 at about milepost 314, which is just outside of Pima between the former dairy farm and the Klondyke/Aravaipa turnoff road.

The motorcycle was part of a memorial ride by the FFF Clubhouse motorcycle riders group, which is based in Safford. The group performs several rides each year and also participates in fundraising for local charities. In 2016, the group was presented with the Pride of Safford Award for its endeavors. 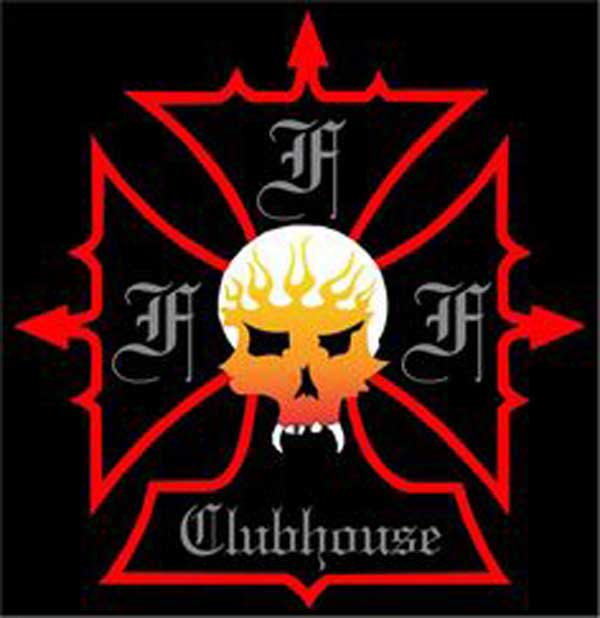 The group of motorcycles were part of a memorial ride organized by the FFF Clubhouse motorcycle riders group.

According to the investigating officer with the Arizona Department of Public Safety, a group of about 100 motorcycles were westbound when they came upon a westbound Toyota Prius driven by Jordan Jarvis, who has a contract to deliver mail for the United States Postal Service and is outfitted with a warning light. Jarvis also runs his hazard lights while delivering the mail.

Jarvis was reportedly stationary while westbound and was attempting to make a left turn while motorcycles were passing him on both sides of his vehicle. There are just singular westbound and eastbound lanes for the highway at that area, but it is in a passing zone. At some point, Jarvis believed he had a break in the stream of bikers and proceeded to make the left turn.

When that occurred, several motorcycles braked to avoid hitting Jarvis, and a blue Harley Davidson trike operated by Steven Bingham wasn’t able to stop in time and collided with a custom Harley Davidson, according to the DPS investigating officer. The operator of the custom Harley, Heath Hartzell, 38, and his passenger, Shiloh Hartzell, 35, both of Safford, were thrown off the bike, which then continued without an operator and sideswiped a black Harley Davidson trike. Heath was treated by paramedics at the scene and Shiloh was taken by ground ambulance to Mt. Graham Regional Medical Center (MGRMC), where she was treated for minor injuries and released.

While witness accounts vary, the officer noted that as far as the elements of the crash, the only thing the investigation can conclude at this time was that Jarvis was stopped in the westbound lane trying to negotiate a left (southbound) turn while motorcycles passed him on both sides. Jarvis then believed he had room to perform the turn and when he proceeded the peloton of motorcycles braked hard.

The crash caused the highway to backup for several miles as officers directed alternating one-way traffic during the investigation and clearing. The roadway was fully opened roughly 45 minutes to one hour after the crash, according to the investigating officer.

While the crash is still under investigation, the evidence received so far shows the blue trike operated by Steven Bingham was following too close to the custom Harley to stop in time and is likely to be listed as the cause of the crash.