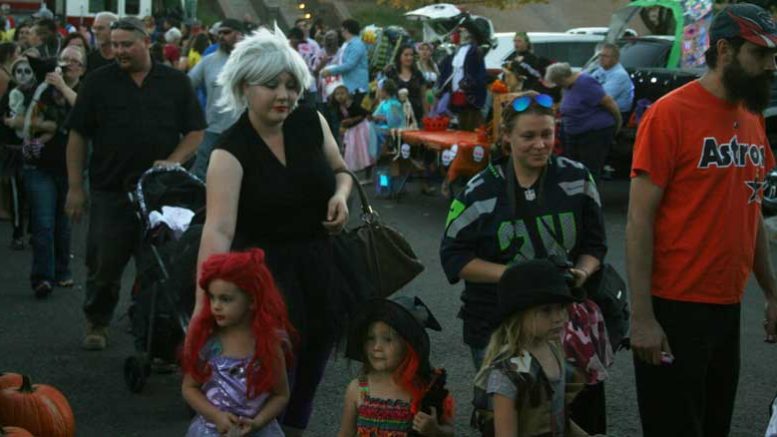 Photo By Gualterio Casias: The Oct. 26 Morenci Community Center-Morenci Library Halloween festival drew several hundred children, parents and grandparents. The great variety of costumes was quite impressive as no one dressed up for the occasion looked the same.

“They did the Mash. They did the  Monster Mash. It was a graveyard smash . . .”
Bobby “Boris” Pickett

MORENCI – The song Monster Mash added much to the spooky atmosphere of the Morenci Halloween festival. There were strange-looking creatures, children, and young adults,  ranging from a mummy to witches, ghosts, goblins and pretty princesses. 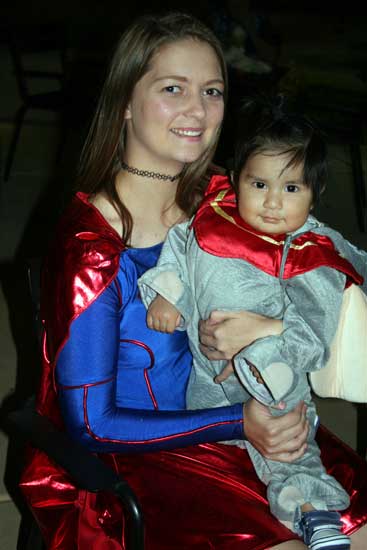 Photo By Gualterio Casias: Uriah Bernal looks quite happy as he is held by Superwoman Bethany Wright. Uriah’s costume is very much in line with Bethany’s. They were among hundreds who attended the Oct. 26 Morenci Community Center-Morenci Library Halloween festival.

There was candy galore from many different sources. Of course, those old enough to hold a container of some sort, perhaps a pumpkin-shaped bucket, obtained a pretty big haul of sweets.

Hundreds upon hundreds of children, some in strollers pushed by parents or grandparents, attended the event put on by the Morenci Community Center-Morenci Library. One could gauge the attendance by the fact almost every parking space in the Morenci Plaza was filled. It was reminiscent of the recent Freeport McMoRan Company Picnic at which parking spaces were at a premium as thousands attended that event.

Of all the excitement at the festival, the Haunted House in the Morenci Club was by far the most popular. There were very long lines of kids and parent waiting for the experience. It was so popular that although the Haunted House was scheduled to close at 6 p.m, the doors remained open until much later as a long line of people remained waiting to enter.

Was it scary? Children who were asked about it said it definitely was “very scary.”

But wait, there was more. The Morenci Library had “Sensory Stations” where children could find out what intestines, brains or an eyeball feel like. Of course, those sensations were actually cooked spaghetti or other such duplicate matter. Many youngsters had no problem with the sensations while others shook their heads, wore looks of disgust and declined the offer. 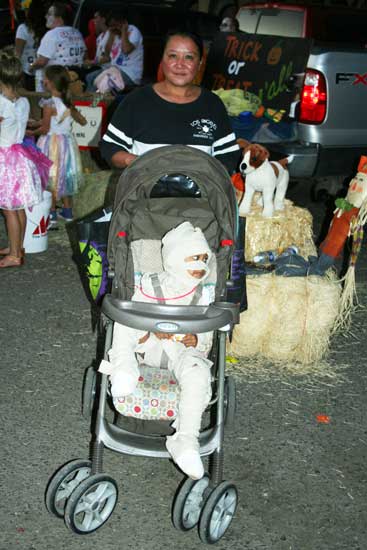 Photo By Gualterio Casias: Kai Quitugua looks very scary as he sits in a stroller wearing in his mummy costume at the Thursday, Oct. 26 Morenci Community Center-Morenci Library Halloween festival. Accompanying him is grandmother Jennifer Montano. Kai was among a great many toddlers in strollers escorted by parents or grandparents in the large crowd that attended the event.

In the parking lot were several vehicles with their trunks open. It was part of a contest to see who could have the creepiest, and most fun, decorated trunk. The names of winners were not yet available at press time.

The event started around 4 p.m., shortly after school let out. The sun was still above the horizon and by the time it was setting behind the nearby Petahaya Mountains, the fading sunlight began making the festival scene all the more interesting, and seemingly quite more accommodating to the costumed creatures who roamed in the parking lot,  library and the Morenci Club.

Bethany Wright held little Uriah Bernal at a table in front of Starbucks. She was decked out as Superwoman wearing a blue and red outfit and little Uriah had a matching costume. Wright occasionally babysits Uriah as their fathers work with each other at the FMI Morenci copper mine.

Wright said she was delighted with the event and its setting. She said having the festival in the Morenci Plaza was much safer for children who might otherwise be walking on streets going door to door seeking Halloween treats. “This is really a good idea,” she said. “I think the whole thing was great for the community.”

Putting on the event required a great deal of effort, said Kia Gaethje, supervisor of the Morenci Community Center’s recreation team. She lauded the department’s groundskeeping crew, Morenci Fire Department, and the Greenlee County Sheriff’s Office, all of whom contributed candy, time and personnel to the event. There were others who volunteered their time to man booths at which goodies were distributed.
Gaethje also lauded recreation team member Julie Payne. Another group was supposed to have done the work but did not follow through, thus leaving Payne to lead the effort. Gatehtje said Payne was the one “who really put it all together. She only had two days to put it together” and did. Gaethje also said of the festival, “We had no idea it would be so successful.” 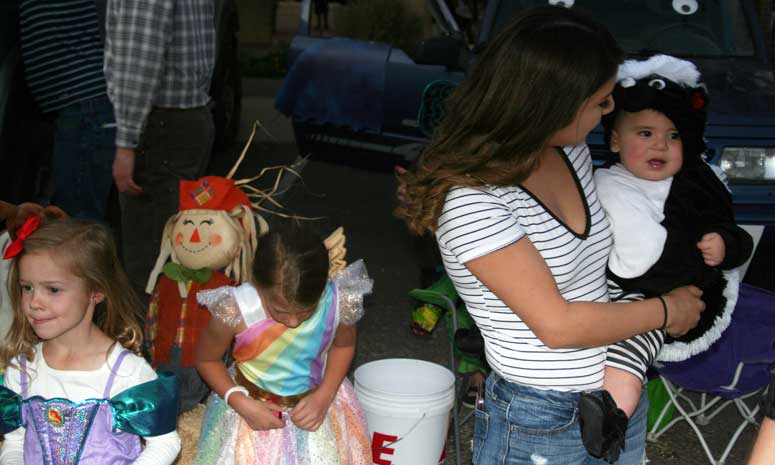 Photo By Gualterio Casias: Two little girls, at left, are each dressed up as a beautiful princess at the Morenci Community Center-Morenci Library Halloween festival while at right, a baby appears to be wondering what is going on.

That was manifested by the long line of people remaining to experience the haunted house although it was supposed to close at 6 p.m.
“We kept it open because we didn’t want to turn away anyone, especially after they had waited so long to get in,” Gaethje said. 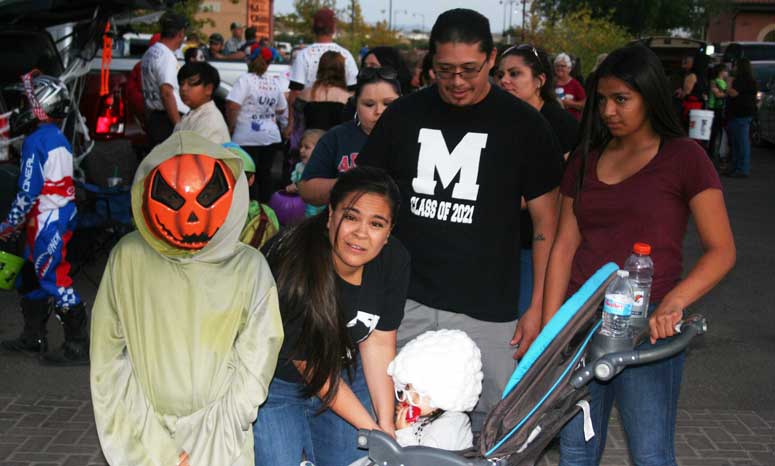 The Monster Mash song was recorded in 1962 by Bobby “Boris” Pickett and the Crypt Kicker Five. Originally done as a joke, the song has been a must at every Halloween party since. Pickett’s voice is meant to sound like that of Boris Karloff, who played Frankenstein in the 1931 movie. The movie’s theme was a mad scientist attempting to bring a dead body back to life. In doing so he created a monster –  Frankenstein, who never spoke in the movie, except for occasional growls and grunts. However. Karloff played in several moves subsequent scary movies. Pickett imitated Karloff’s well-known voice in Monster Mash.

Most younger people probably have never seen the original movie or know who Karloff is. However, 55 years since its initial recording and release, The Monster Mash remains a staple of celebrating Halloween.

Here is how the song starts out: