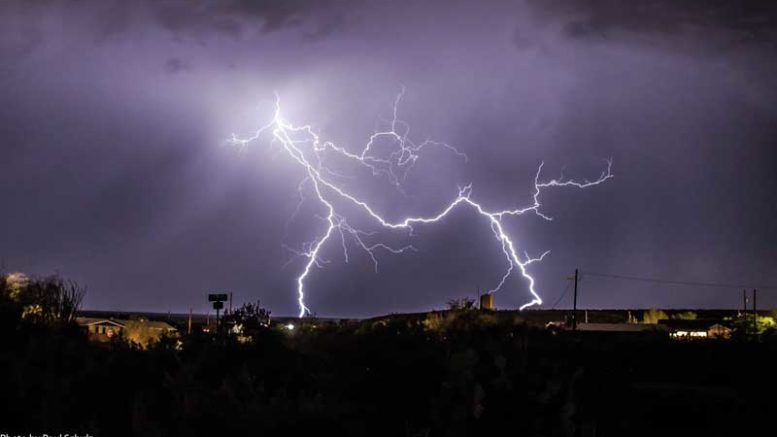 GRAHAM COUNTY – We’ve been asking for it, and now it’s here.

The monsoon has hit the Gila Valley – by the old standard of at least three consecutive days of 50 percent humidity or greater – and while it is a welcome respite from the heat and fire, it also brings its own dangers. 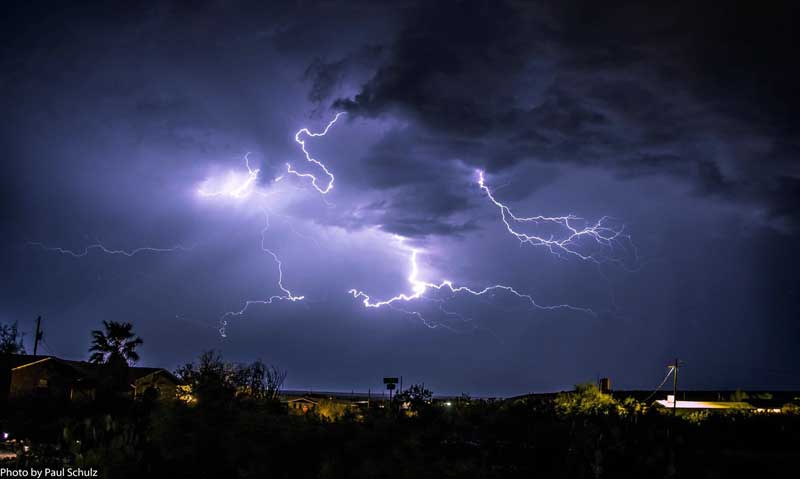 The eastern part of the Gila Valley, including Solomon and Safford, got a good torrential soaking Friday that registered .72 of an inch at the University of Arizona Meteorological Network Agriculture Center Station (AZMET) in Solomon. The rain on Friday brought the total recorded rain for the year at the station to 2.10 inches. Compared to the previous two years, the Gila Valley is significantly below the amount of rainfall at this point of the year but not historically that far off, especially since the area had seen an 18-year drought.

Heavy winds accompanied the thunder and lightning, causing trees to uproot and minor property damage, including one resident’s metal fence to be blown off its block wall.

Other areas across the state also experienced significant weather, including a haboob in Casa Grande and a waterspout tornado in Marana just north of Tucson.

The rain helped drench the Frye Fire down to nearly nothing left, as of Saturday afternoon, as a skeleton crew remains to mop up the fire. With 93 percent containment, only minimal interior burning was still recorded Saturday.

With the fire burning so hot in some areas, however, and the loss of vegetation, flood worries persist, especially in the Pima area. The towns of Pima and Thatcher, the city of Safford and Graham County have all made preparations to mitigate flooding in the area.

Sunday may be the first test of such preparations as the National Weather Service has issued a flood watch for all of southeastern Arizona. Safford and Graham County have a 40 percent chance of thunderstorms Sunday through Tuesday, followed by a 30 percent chance through Thursday. The thunderstorms have the potential to produce heavy rain in excess of 2 inches per hour with the strongest storms forecast for Sunday and Monday. As noted above, the weather station at the AZMET has registered just more than 2 inches for the entire year.

The flash flood watch includes all of Graham and Greenlee counties and is in effect through Monday evening.

According to the National Weather Service, a flash flood watch means conditions are favorable for widespread flash flooding to develop. The dangers of flash floods are harder to recognize at nighttime, and precautions should be made and never drive through an area with running water.

Watch your step; rattlesnakes are on the move

Gila Valley gets scant rain so far during parched monsoon