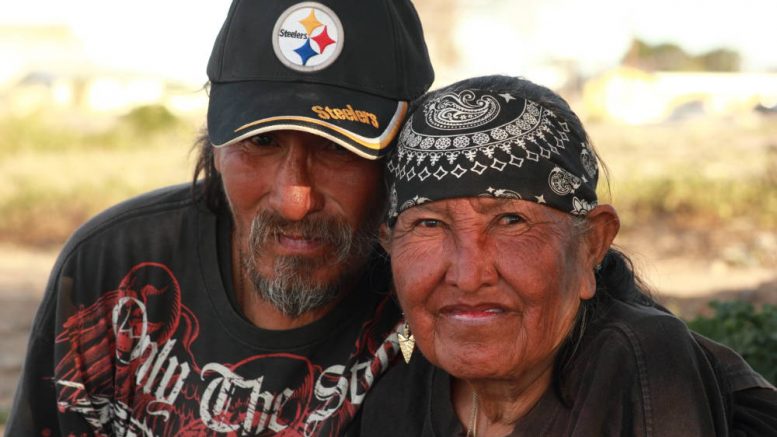 I learned to be homeless: Lakota and Joyce

This is the first of Gila Valley Central’s four-part series exploring different types of local homelessness in our area. Lakota is a street name. Neither person featured in this article wished to use their last name.

SAFFORD – Lakota’s parents and adoptive parents all died before he was 10.

Lakota and his twin brother were split up and placed in foster care. Lakota went through 11 foster homes. If he didn’t like who he was living with, he would run away.

“I learned to be homeless like that,” he said.

Lakota is a 57-year-old Lakota Sioux from the Standing Rock Reservation in South Dakota, now permanently homeless in Safford.

Lakota lives with a San Carlos Apache woman named Joyce in a tent on Milwaukee’s Best Ice Avenue, a dirt division between two fields behind Natural Remedy Patient Center. Milwaukee’s Best Ice Avenue intersects Vodka Lane, a foot path running parallel to Thatcher Boulevard behind the Valley Motel. The area is a favorite of Safford homeless for the easy access to Walmart, restaurants and the bathrooms at Firth Park. They can also cook dinner in the microwave at the nearby Giant gas station. 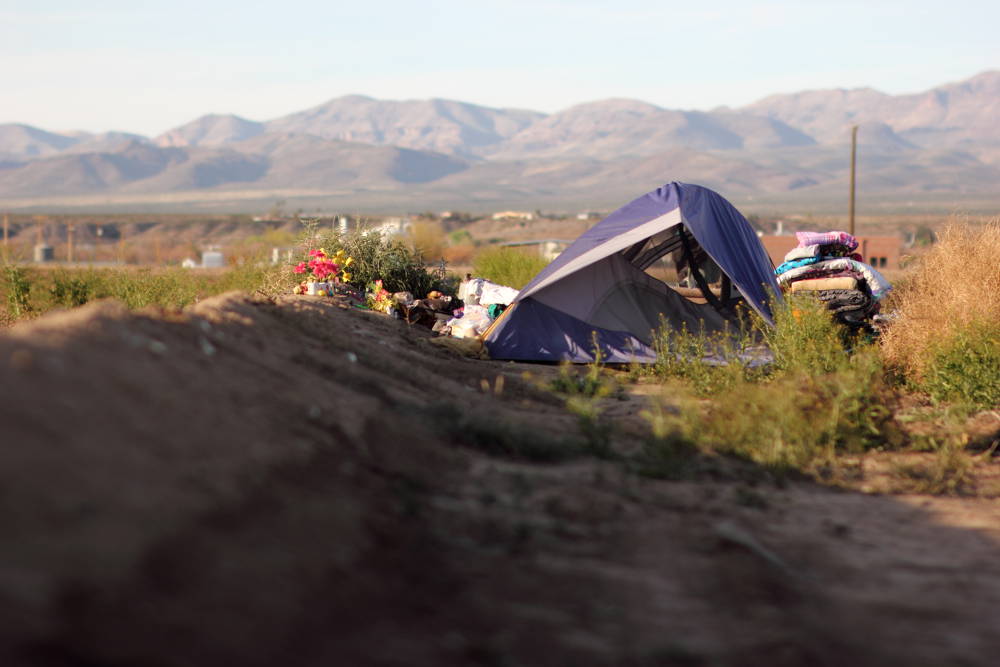 The path names come from the favorite beverages of the residents. Lakota and Joyce always have a can of Milwaukee’s Best Ice handy because it has a higher percentage of alcohol than other budget beers.

“It tastes good if you drink enough,” Lakota said.

Lakota finishes off a can, and in a second, it comes back up, splattering spume all over Joyce and the ground. Joyce reprimands him for drinking the bottom of the can.

In three interviews, they tell their story in non-linear pieces, mixing some dates and time spans. Lakota and Joyce display knowledge of social situations, history and scientific topics, such as the function of New Mexico’s Very Large Array radio telescope.

At some point, Lakota had children and a job. At about age 30 he decided to be permanently homeless in Kansas. Later, his adult daughter paid for him to be in an apartment, but Lakota was not allowed to drink when he wanted, so he moved out, becoming homeless again in Kansas. When his brother died from alcoholism, Lakota moved in with his brother’s widow in Duncan.

That lasted two months. In December 2008 he moved in with Joyce, who was already living near Vodka Lane.

Their camp is full of small field mice: in their tent, in the bag that has their canned food and running between people’s legs. The tent’s zipper is damaged, so the door does not close. When it’s warmer, skunks and the occasional snake come visit. Joyce said one night recently something grabbed her foot and scared her while she slept. She woke up Lakota, who thinks it might have been a coatimundi. The animals make it hard to store fresh food long term.

“We can’t keep bread and stuff like that very long,” Lakota said. “That’s why we try to keep stuff as clean as we can.” 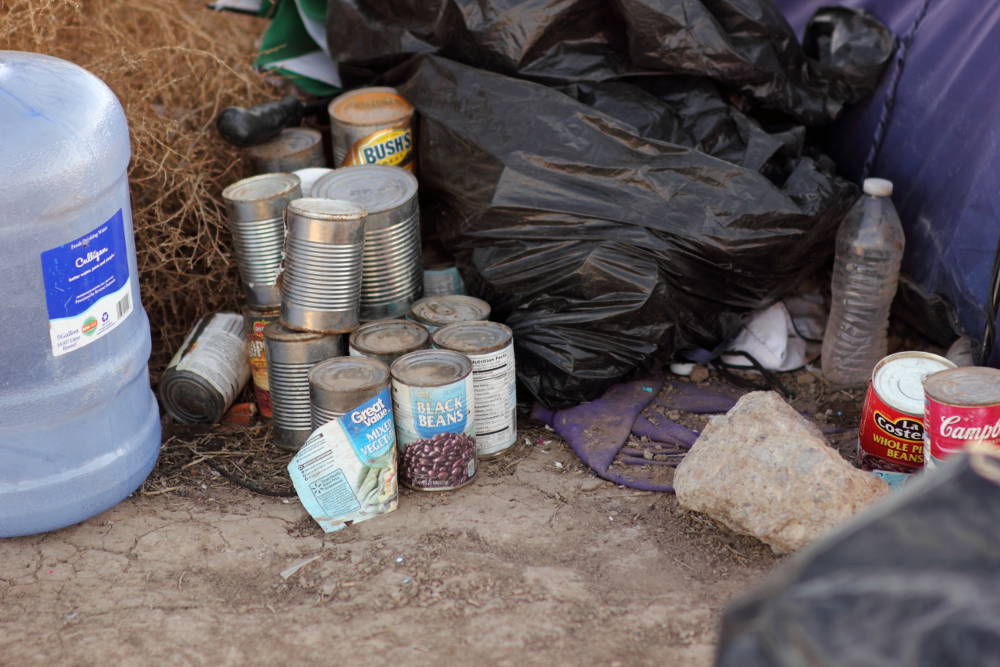 Eric Burk Photo/Gila Valley Central: Lakota and Joyce have both canned food and fresh produce that they store in bags and plastic containers.

Sometimes they buy meals from Walmart, and, several times a week, local ministries hand out meals. Lakota and Joyce hold up cardboard signs, known as “flying a sign,” to raise money. People give them fast food, groceries or cash.

Lakota also gets about $700 in disability benefits each month on a debit card. Someone robbed their tent once, taking Joyce’s backpack containing her wallet, identification card and cash. The backpack also contained a marriage license for Lakota and Joyce. They still are not married, since a new license will cost $27.

Joyce is 54. She was born in Graham County and owns property in Bylas, where she used to have a house. One night in 2003, Joyce was staying with her sister overnight. The next morning, she found out her home had completely burned down.

For a while she lived with relatives, but when she became the subject of arguments, she decided to move out and started couch surfing with a friend in Safford on weekends. When he died in the mid 2000s, Joyce became homeless full time. Lakota says Joyce has been living near Vodka Lane longer than anyone else.

They are not really homeless, according to Lakota. “Home is where you rest your head and you feel safe,” he said. 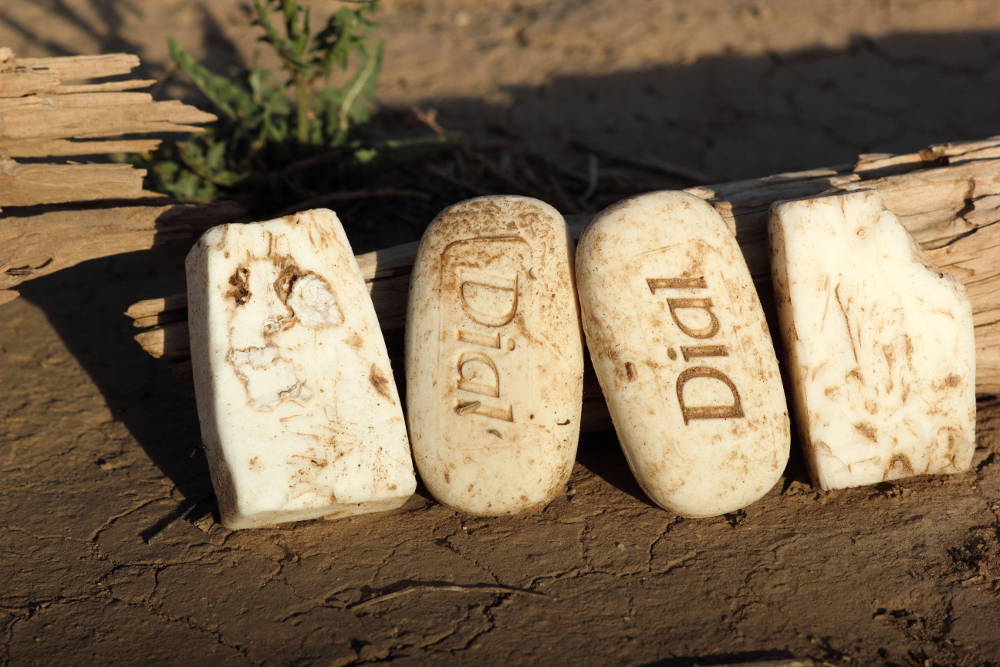 Near the tent, they have a poolside lounge they use as a couch. Lakota sits on a chair; Joyce sits in the entrance of their tent on a pile of bedding. A row of mugs and plastic flowers decorate one side of their camp, and classic rock plays on a radio. They have bags full of cans and clothes. There are a few beer cans scattered on the edge of the camp among tumbleweeds, but not as many as by the tents across the field on Vodka Lane.

Wind breaks their tent poles, so they occasionally buy a new tent. The hailstorm last October flattened their tent with them inside. Even in winter, they say it does not get seriously cold.

“We had quilts, we had fleece blankets and we had sleeping bags and blankets to sleep on,” Lakota said.

“We choose to stay out here because we go where we want (and) we stay where we want,” Joyce said. In Bylas, they could stay with Joyce’s children and grandchildren but, for now, prefer to remain independent and homeless.

Lakota likes the view of the mountains, and he likes watching the farmer work the cotton fields. He says the farmer does not mind, but tells them not to let a tent city develop and to keep the trash under control. 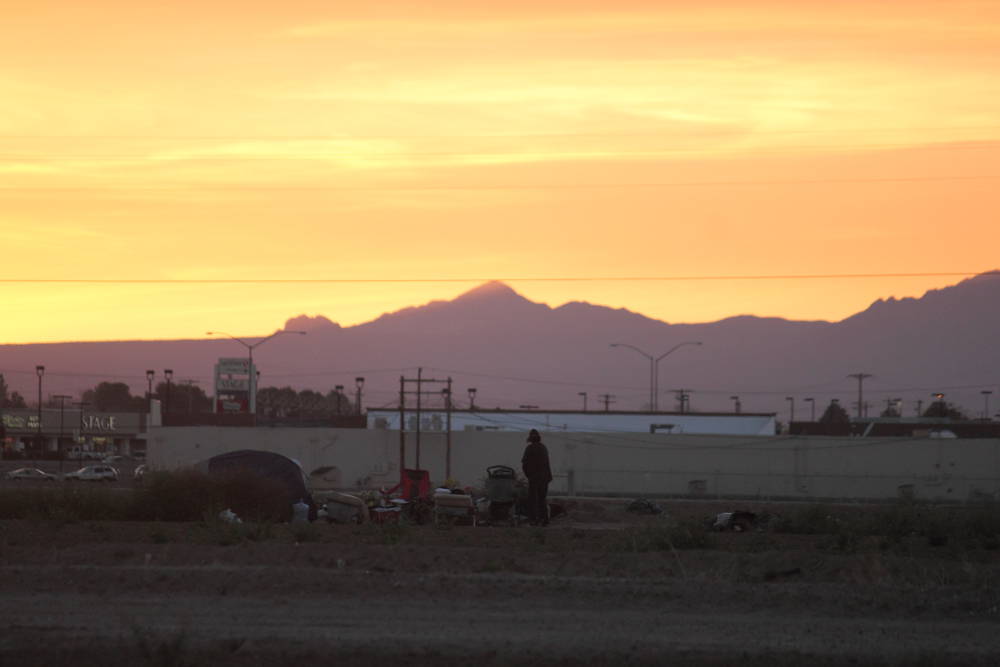 The future home of Lakota and Joyce is still very much up in the air.

Joyce indicated that she wants to move back to Bylas, but Lakota would rather live in the Valley Motel at $600 a month. Joyce said they can get more money in food stamps if they turn in their receipts for food, compensating for the increased cost of living, while Lakota is not sure the farmer will want them between his fields this summer, or that they will want to put up with the dust when he plows the field.

Whatever happens, he and Joyce will stay together. “We don’t leave each other,” he said. “If she goes to Bylas, I go to Bylas.”

Patterson’s Perspective: Another year in the books