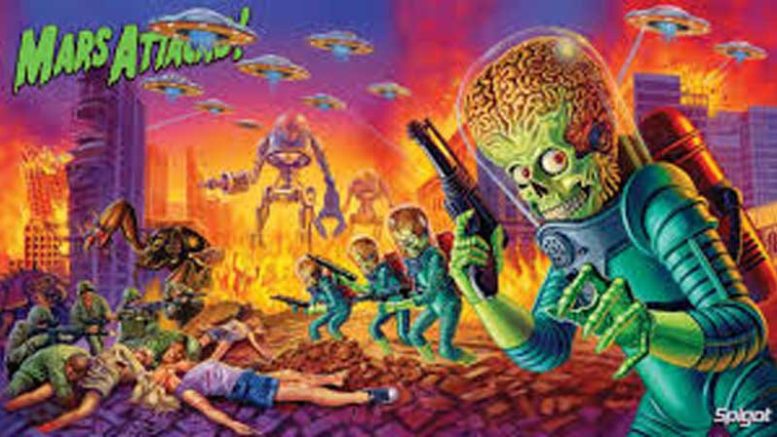 “We still have two out of three branches of government left, and that ain’t bad.” – President James Dale (Jack Nicholson), speaking to the American people on the massacre of Congress by Martian invaders.  “Mars Attacks!”, 1996.

I realize civics education is not high on the scholastic curriculum, but when a third of the adult population can’t name a single branch of government, then maybe it’s time to rethink our educational approach to the subject.

Yet, this same 33 percent has no difficulty voting. The problem, of course, is do they really have any idea who or what they are voting for? In many cases, they’ don’t.

The dominance of big party politics, continually supplemented with the doctrines of a liberal-leaning academia and media has – to a great extent – successfully anesthetized most rational political thought. Unlike many things in society requiring a certain degree of proficiency to accomplish – an education, driving a car or qualifying for a particular job, for instance – the right to vote is not predicated upon such basic concepts; one must only register and show up at the polls.

And now, in some communities, being a native-born or naturalized citizen isn’t necessary to vote in local elections. The so-called “immigrant voting rights” movement is gaining in popularity with the reasoning that since these people already live amongst us, then they may as well vote with us. Citizenship is not required, only some kind of evidence indicating employment or long-term presence in the country.

Obviously, the propensity for voter fraud is greatly enhanced, as valid documentation of these individuals is often difficult to substantiate. Even more egregious, their vote counts just as much as an actual citizen whose familial ancestry in this nation may go back decades or hundreds of years.

In other words, many of these foreign nationals can enjoy the assistance of taxpayer-provided government benefits without actually having any skin in the game.

Our grasp of history and government has seriously been eroded over the past 30-40 years. What was once routinely taught in elementary, high school and college level civics classes has been diluted to such an extent that currently, most folks are extremely deficient in basic knowledge of these subjects. As a result, their perceptions of how the government is supposed to function is frequently flawed by a continual indoctrination of contemporary misinformation.

The University of Pennsylvania’s Annenberg Public Policy Center recently conducted a study illustrating how poorly informed Americans are regarding basic constitutional provisions. When asked the simple question, “How many branches of government are there?” only 26 percent – about 1 in 4 – provided the correct answer – down from 38 percent in 2011. Even worse, an abysmal 13 percent remembered there were at least two separate divisions, while 27 percent guessed only one. A whopping 33 percent – fully a third of the responses – didn’t have a clue. 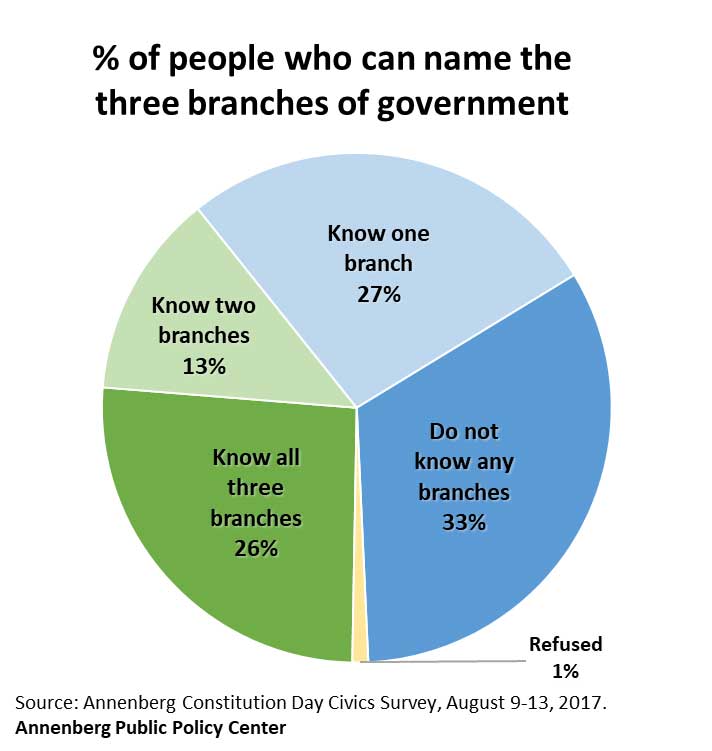 For those readers who may have slept through history and government classes, the three branches of government are the executive, legislative and judicial. Or basically, the president, Congress, and the courts. It’s been this way for the past couple of hundred years.

There’s more.  While the 1st Amendment to the Constitution guarantees freedom of speech and the press, its itemized terms also contain the seeds of its own destruction. Contrary to popular opinion, the right to speak freely does not include the right to incite anarchy, civil disturbances, property damage or squash another individual’s right to speak. Discussion and debate is one thing, burning buildings and inflicting physical harm is quite another.

When these same Annenberg Center polled individuals were asked to name the stated provisions of the 1st Amendment to the Constitution, only 15 percent could identify freedom of religion; 48 percent mentioned freedom of speech; 14 percent recognized freedom of the press; 10 percent correctly answered the right of assembly; only 3 percent had heard of the right to petition the government; and an amazing 37 percent had no idea what the question was about.

Like most matters of importance, the vitality of our constitutional declarations is based upon the people’s knowledge and enforcement. Without constant vigilance and awareness, disciplined liberty is always in danger of being subverted.

Sadly, this seems to be the current state of public awareness of our history and governmental system. Is it any wonder slick talking politicians, college professors, media pundits and agenda-oriented enthusiasts have successfully succeeded in dumbing us down?

If we don’t know anything about government, then there’s a good chance we’ll believe anything coming from the government.