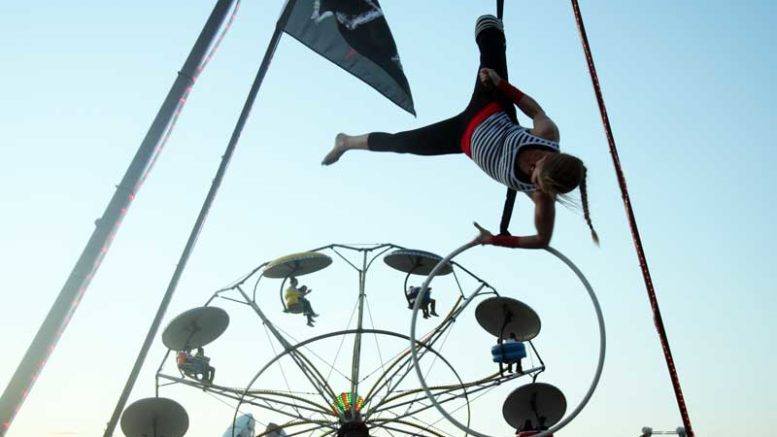 Photo By Gualterio Casias: A woman is silhouetted at sunset as she performs acrobatics with a large metal hoop at the Greenlee County Fair in Duncan on Sept. 16. Hundreds observed as she performed many awe-inducing moves.

Crowds swarmed fairgrounds about as much as pesky bees

DUNCAN – Things were buzzing, in more than one way, at the 99th annual Greenlee County Fair over the weekend. There was the buzz of human activity as crowds of people packed the exhibition buildings and the livestock barn. They kept vendors busy and enjoyed the many rides and other entertainment offered from Sept. 14-17, Thursday-Sunday, at the county fairgrounds in Duncan.

Then there was the other buzz. A swarm of bees plagued the fair and created at the time much discomfort as folks swatted them away or rushed to be somewhere the little critters were not. That was most difficult as the bees seemed to be everywhere, especially on Friday and Saturday. 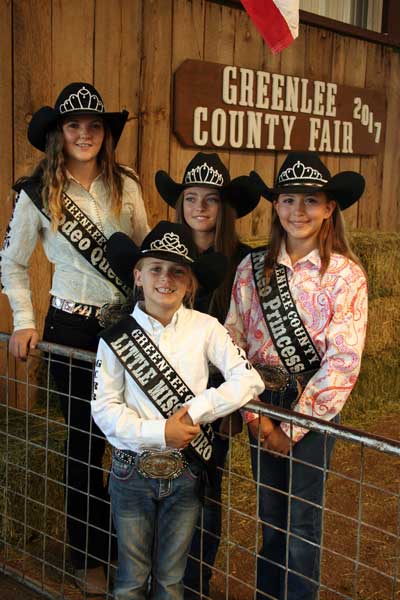 Photo By Gualterio Casias: These four lovely young ladies reigned over the 2017 Greenlee County Fair and Rodeo on Sept. 14-17 at the county fairgrounds in Duncan. Here they add some class to the already outstanding livestock auction held in the auction barn on Saturday, Sept. 16. They are, from left, Queen Makaelyn Riggle, 16, Princess Tayah Wilkes, 10, Little Miss Payton Killmer, 8, and Junior Miss Kaylie Layton. They all delighted fair-goers with their royal smiles, charm, and wit.

However, their presence did not stop fair-goers from enjoying all that the fair had to offer. That included a nighttime pro rodeo and junior rodeo. Results were not immediately available. Both events were well attended. After all, this is Arizona and rodeos remain a big attraction for people anywhere in the state.

The number of people attending the 99th, especially on Friday and Saturday was also not immediately available, but judging from the crowds on Saturday afternoon and night, it would not be surprising if previous attendance records were broken.

There was plenty for folks to eat and do. The 4-H cook shack was afire with customers lined up to buy a delicious burro. There were also lines at Hawaiian Shaved Ice booth as fair-goers sought to refresh themselves.

People took their time admiring the many photographs and original art in one of the exhibition buildings. Ah, but there was more. Shelves were filled with jar after jar of preserves –fruit, vegetables, and one jar appeared quite different from the rest of the preserves on display. A visitor was puzzled by the unique-looking contents of the jar. County Fair Culinary Supt. Debbie Crotts explained the jar contained elk meat. The visitor commented, “Well I’ll be darned. Never heard of such a thing. Guess I definitely learned something today. I had no idea you can do that with elk meat.” 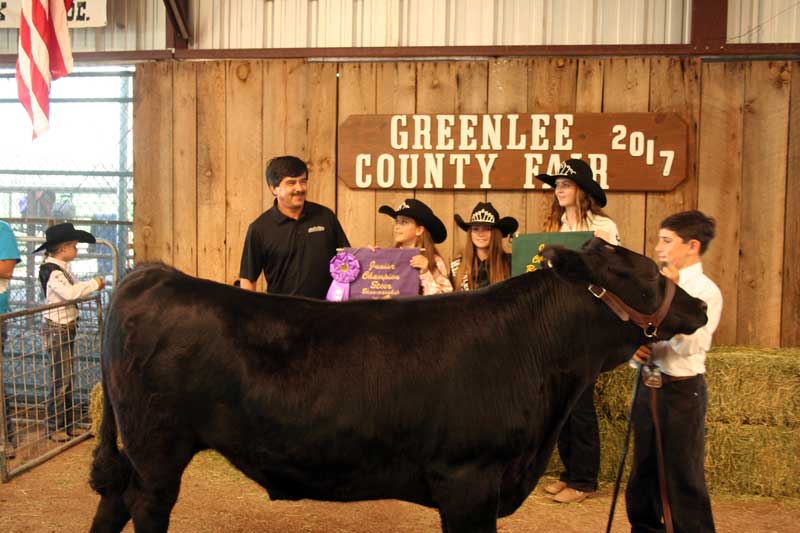 Vendors offered a very wide variety, in the exhibition hall and outdoors. Items varied form handsome jewelry, top-notch cookware, homemade leather goods and more. The Greenlee County Health Department provided free flu shots and offered much information on healthy living. The Duncan Valley Electric Cooperative (DVEC) had a booth at which customers and people, in general, could learn about how the co-op works and the benefits of being a member. DVEC provide electricity for southern Greenlee County and has had a longstanding relationship with its customers. 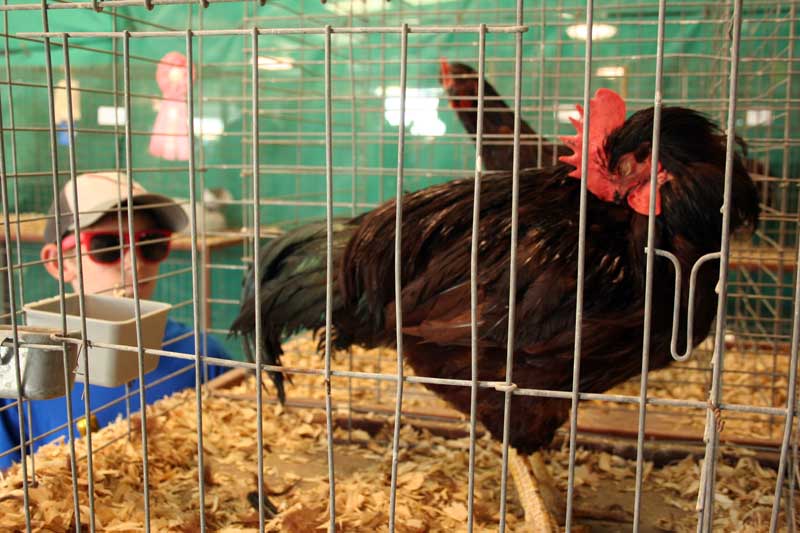 Photo By Gualterio Casias: Samuel Spivey, 12, of Safford, watches a rooster preen itself at the 2017 Greenlee County Fair in Duncan on Sept. 16. Several fowl were among the many small animals housed in the fairground auction barn. There were blue, red and yellow ribbons awarded for the best in class.

The auction barn was packed when it came time for livestock raised by local youths –Duncan Future Farmers of America (FFA) and Greenlee County 4-H. Young, middle-aged and elder folks packed the stands around the arena as auctioneer Jack Blanford, in a traditional rapid auctioneer’s call, announced bids and then asked for higher bids for the high-quality hogs, steers, sheep, and goats. His goal no doubt was to have bidders up their offers to support youths who put in a great deal of work and sacrifice to raise their animals. 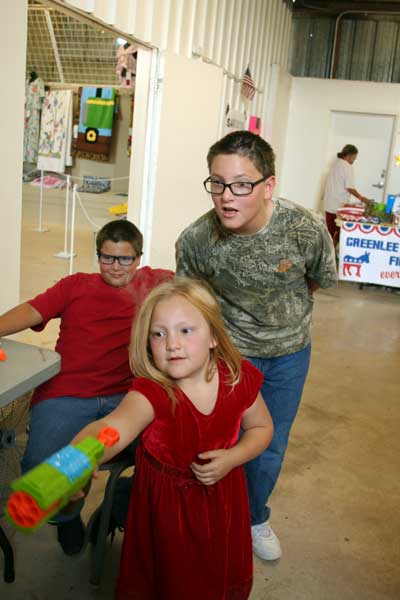 Photo By Gualterio Casias: Tamra Sipes takes careful aim as she tries to win a prize at a U.S. Forest Service booth on Saturday, Sept. 16 at the Greenlee County Fair in Duncan. Watching in suspense are brothers Douglas Sipes, 11 and Clint Sipes, 12. Fernando Henry of the Apache National Forest Ranger Office hosted the event. Prizes included Smokey the Bear ranger-style hats, frisbees and other fun items

Critters were not limited to larger animals. There were also fowl – roosters and chickens – and rabbits on display. As with the larger animals, they were also on display to hopefully win a blue, red or yellow ribbon and to some degree, bragging rights.

The bees were a bother throughout Saturday, but by sunset, they were gone, returned to their hive. No one knew exactly where the hive was located but some did speculate it was not located on fairgrounds property and probably came from a large tree somewhere in the vicinity, perhaps as far as a mile away.

Sundown saw the fairgrounds and exhibition halls packed even tighter. People began standing in long lines to take one of the several rides which offered different thrills. Interestingly, on some of the more daring rides on which often draw screams of delight or at least some small terror, there was no screaming. Instead what one heard was laughter and shouts of excitement. That was not because the rides were not challenging, They were. But laughter was the rule.

Saturday was the final night for the rides and by 8 p.m. people were still coming through the gates to enjoy the fair. The many-colored lights of the rides and vendors visible in the dark no doubt added to the attraction.

Overall, minus the bees, one could say that a good time was had by all. Hopefully, the little critters with stingers will not be around next year.

Results for the various competitive events will probably not be available for at least two weeks. When they are available they will be announced on this website.