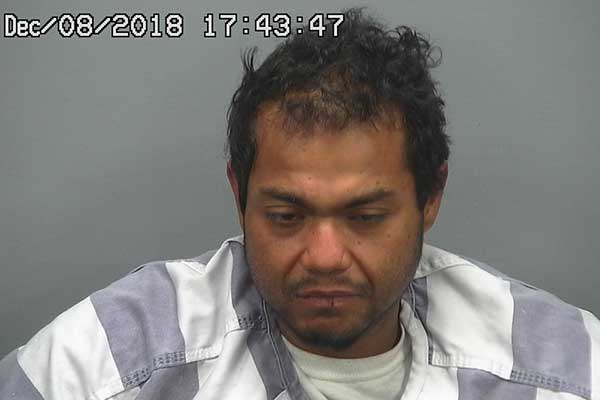 A police officer was flagged down by multiple people as he drove past Pizza Hut on Highway 70 in Safford Friday night at approximately 8:00 PM. The group pointed westbound and said, “he went that way and is in front of Little Caesars.”

The group told the officer that a man had come into the restaurant and had yelled at employees and broke a menu stand by the entrance. The officer recognized the suspect as Ted Henry, having just dealt with him in an earlier incident.

The officer told Henry he needed to relax. Henry replied, “I know.” He relaxed his hands and began to tear up, saying that he was afraid and did not want anything to happen to him. The officer holstered his taser and asked Henry to stand by his vehicle.

When asked what happened at Pizza Hut, Henry apparently said that he didn’t understand because he was emotionally upset. Henry told the officer that he just wanted to go home, then said that he wanted to go to jail.

Three deputies arrived to assist after hearing Henry yelling from across the street. This seemed to agitate Henry – having 4 officers standing near him. Every time somebody would move, Henry would jerk his head in their direction to see what they were doing.

One of the officers went to the restaurant to find out more about the incident. Apparently, Henry went into Pizza Hut and said that he was there to pick up a pizza. They told him that they didn’t have an order under his name, so he placed an order. When the cashier asked for payment, Henry reached into his pocket and pulled it out again with no cash in hand. He then pretended to give it to the cashier.

When the cashier told him he actually had to pay, Henry reportedly started yelling. According to the police report, Henry then left out the east door and began walking through the drive through between cars. He circled around the building and came back in the front entrance and asked for his pizza. Again, the cashier told him he needed to pay for it. He began yelling again and as he left through the main door, he shoved the menu stand over, chipping the wood and braking pieces off of the wheels.

When the officers went to place handcuffs on Henry, he refused to comply. One of the officers reached for his arm and he pulled away and attempted to get away. As the officers struggled with him, Henry tensed up, and started to grunt and scream at everybody to get off of him.  Officers managed to force Henry to the ground and finally succeeded in cuffing him.

Henry was booked into the Graham County Jail for criminal damage and erratic behavior.