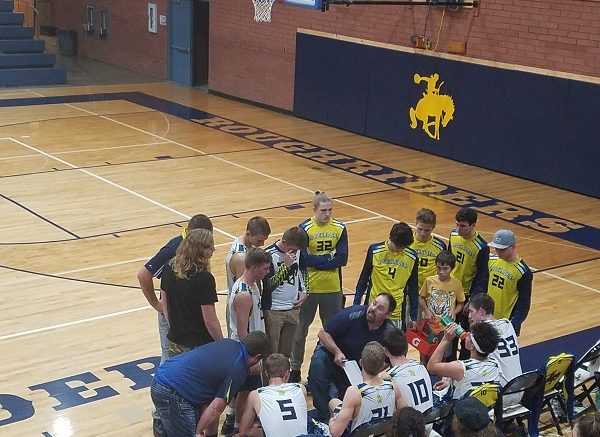 The Pima Roughriders entered Tuesday night’s game against Show Low shorthanded. They had only 9 healthy players in uniform and they almost pulled off the win.

Pima led 14-12 after the first quarter thanks in large part to Alec Judd’s shooting. He hit two long 3 pointers to keep the Riders in the ball game. He added another one in the 2nd quarter and combined with 8 points from Hayden Ashby the Riders led 25-21 at halftime.

The Show Low Cougars made some halftime adjustments and went with their height advantage in the 2nd half. They started Brian Reed, Colton McGinnis and Thadeus Carlyon all of whom are taller than 6’4 and were able to use that to their advantage. Point Guard Aahron Villalba got hot from behind the arc and the Cougars would take the lead at the end of the 3rd quarter.

Pima trailed by 4 with 2 minutes remaining win Tim Salyer hit a running jumper in the lane to pull the Riders within 38-36. Show Low ran a 5 man weave at the top of the key until there was under 1 minute left in the game. Pima ramped up the defense and produced a steal for a chance to win. The Cougars turned the Riders aggression into a turnover and an easy bucket to take the lead and the game 40-36.

“We gave ourselves a chance at the end,” said Pima Head Coach Cliff Thompson. “We can’t use our injuries as an excuse, we still have to play the game.

Pima falls to to 5-3 on the season and will face Willcox on Wednesday.