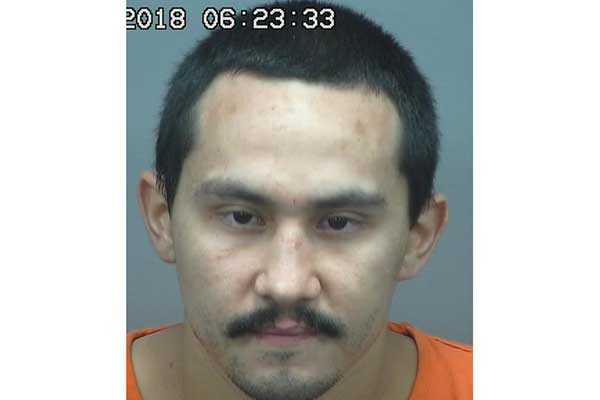 SAFFORD – In the early hours of Saturday morning, a Safford police officer noticed a person running around the apartment on 11th Street as well as a vehicle that was circling in the area. The officer turned off the lights of his patrol car, watched, and waited. When the officer turned his lights back on the other vehicle took another turn down the road and left the area. The officer saw the person sprinting across the road and pulled up next to the man. The unmarked patrol vehicle is very similar in make and color of the other vehicle, so the man walked up to the officer’s passenger door and started to reach for the door handle. The officer asked him what he was doing and he appeared panicked and stepped back out of view.

The officer got out and walked behind the patrol car to speak with the man identified as Nicholas Arevalo. He was shaking and sweating. When asked, Arevalo told the officer that he was headed home from a friends and was waiting for his ride. Arevalo appeared very uneasy and kept looking around. According to the police report, the officer noticed that Arevalo had a black backpack that police were aware had been in a nearby vehicle earlier.

Arevalo was detained while the officer requested a records check. He received confirmation that Arevalo had an outstanding warrant for arrest. Arevalo had fled from the officer in the past, so he called for back up while continuing conversation. After Arevalo was placed under arrest and placed in the patrol car, the officers noticed the backpack was missing out of the truck across the street.

Arevalo was asked if he had anything illegal and he said that he did not. In the backpack, investigator’s found a white plastic straw-like tube that had burned residue inside and a digital scale. Arevalo was asked if someone had him take the backpack out of the truck and he said no, but claimed the items were not his. The officer informed him that he was being charged with possession of drug paraphernalia.

Arevalo was transported to the jail and booked on the warrant and possession of drug paraphernalia. The straw like tube tested positive for opiates.