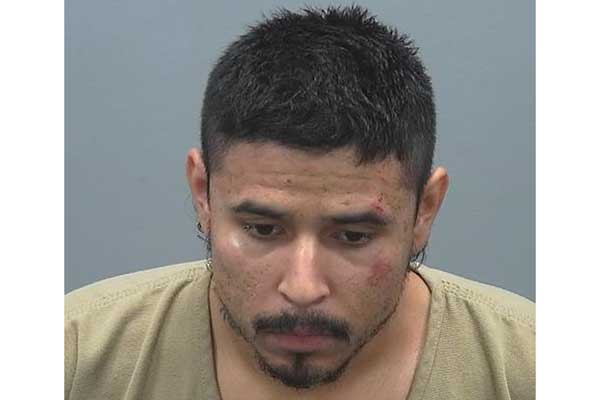 GRAHAM -Friday evening, deputies were asked to check on a vehicle that was idling in a parking lot on Main Street with two males inside. When law enforcement first arrived, they noticed the two men were sleeping inside. Deputies knocked on the window to wake them up. The driver rolled down the window and identified himself as Andrew Gaxiola. When asked why he had been parked for so long, he answered that he was trying to contact his cousin.  The other passenger, identified as Michael Vega, opened his door and made contact with another officer resulting in the police noticing a hypodermic syringe plunger laying on the floor board of the front passenger side. They were asked if they were Diabetic and they both answered that they were not. Michael was placed in handcuffs.

The deputy asked if Gaxiola had any drugs or weapons in the vehicle, and Gaxiola began to act nervous and began reaching around the front seat area. He said he did not have any drugs or weapons. He was then asked to exit the vehicle. Gaxiola began to pick up his phone but was told to put his phone down and to exit the car. An officer ordered Gaxiola to stop reaching between the seat as they noticed his hand down by his leg and the seat reaching for something in a bag. Gaxiola would not follow their orders, so the assisting officer entered the front passenger side of the vehicle and grabbed Gaxiola’s wrist telling him to stop reaching between the seats.

The deputy opened the driver side door and grabbed Gaxiola’s left arm as Gaxiola stated he would leave. However, the deputy informed him, he was not free to leave. The assisting officer yelled, “he’s going to run” as Gaxiola stood up out of the vehicle and pulled his arm from the deputy’s hold. Gaxiola shoved the deputy into the vehicle behind him and attempted to run past. The deputy followed and grabbed onto his T-shirt while attempting to grab hold of his arm. Gaxiola tried to use his other elbow to strike the deputy in the face, but missed. Gaxiola then tried to reach into his pocket. According to the police report, the deputy feared he could be armed with a weapon, so he wrapped his arms around both of Gaxiola’s arms in an attempt to keep him from pulling anything out of his pocket. Officer’s assisted placing Gaxiola into handcuffs and placed under arrest.When officer’s searched Gaxiola, they located a syringe and a pen tube with residue. He also had a bag containing a black rock like substance, that later tested positive as black tar heroin. Gaxiola later told authorities he never bought that much before but got a really good deal so he had to buy it. He stated it was for his personal use.

Vega had already told law enforcement that he and Gaxiola had used the syringe on the floor board of the vehicle to inject heroin. Vega told authorities that the syringe and plastic container found were his.  Vega was informed of his charges for possession of drug paraphernalia and released from custody.

Gaxiola was transported to the Graham County Jail and booked for possession of narcotic drug, possession of drug paraphernalia and resisting arrest. Gaxiola later apologized for running and fighting officers. When asked why he did it, he stated he was scared and could only think about going back to his kid.