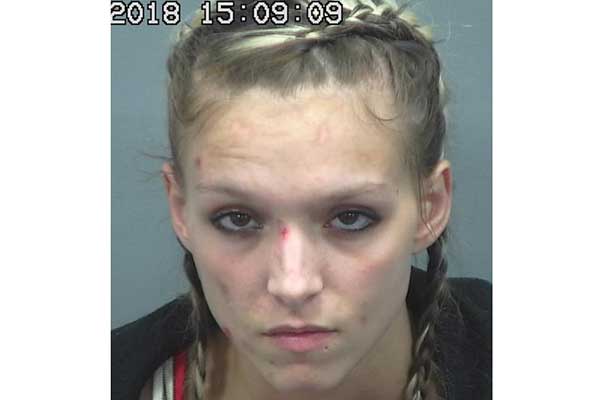 SAFFORD –  Last Wednesday, police were dispatched to a burglary in progress on Main Street. When an officer arrived in the area, they saw a man sitting on a bicycle holding a trash bag full of items as he walked with the bike. A woman wearing a hoodie over her head was walking with him.

When authorities arrived, the woman turned and walked into the driveway of a house on the street and the man continued on the bike on the sidewalk. The officer told the man to wait on the sidewalk as they went to the residence that the woman was seen trying to get in a side door. As the officer got closer to the woman, the man on the bike took off, so other officer’s were advised on the direction he was headed. When the officer went back to find the woman, the home owner informed authorities that she was hiding behind the garage, and that the woman had been asking her to open the door and let her in but the woman told her “no”.  The officer was unable to get behind the garage so they ran to the residence next door and looked over the fence. The woman hiding behind the garage was recognized by the police as, Shirley Lollis. Law enforcement told her to stay there but she replied that she couldn’t and then jumped over a back fence leading to a back yard of another residence. Other officer’s were notified of her identity and direction of travel. In the meantime, the officer was notified of Lollis’ warrant for arrest as they got back into the patrol car to head in the direction that Lollis was traveling. Lollis was taken into custody after authorities found her hiding in a storage building at another residence. As officer’s were searching for Lollis, the man on the bike, identified as Eddie Guerro, was taken into custody. Officers had found paraphernalia and pills on Guerro.

When officer’s spoke with the owner of the residence on Main Street, they said nothing was stolen, the house was empty because the owner was doing work on it to get it ready to sell. It appeared someone had been staying in the house and it now had a heavy smell of cigarette smoke that the owner commented that he would have a hard time getting rid of before he sold the property. The sliding glass door in the back had also been damaged .

Authorities were told by Guerro that he and Lollis were homeless and they had found the house for sale unlocked so that went in and had stayed there for two days. They allegedly admitted to also smoking meth in the house.

Lollis told authorities that a friend had lived in the house and they found it was unlocked so they had stayed there for about two days. Lollis was booked into jail on her warrant. Additional charges for both parties are still pending.