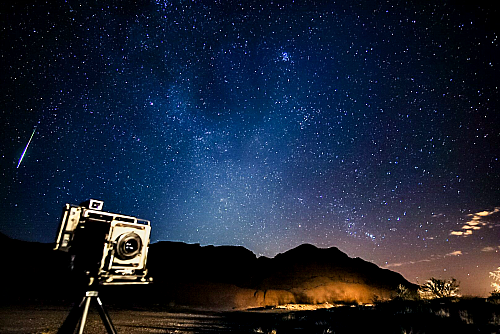 Contributed photo/Courtesy Paul Goble: The Perseid meteor shower was a sight to see Thursday, as nearly 200 meteors per hour lit up the sky.

Paul Goble, a local photographer, said that he appreciates the local landscape for sky photography.

“What really sets this place apart from anywhere else in the world is a stark contrasting landscape across such little space,” Goble said.

Goble watched the meteor shower from a vantage point at Cluff Ponds. Using the headlights from his truck, he illuminated his antique camera to bring an interesting aspect to his photos. He stayed at Cluff Ponds for several hours to photograph the shower.

In contrast, photographer Paul Shulz, of Safford, set up his camera on his patio along with a timer.

“I captured from a pool of 400 or more (photos), about two dozen meteor pictures,” Shulz said.

The Perseid meteor shower is a yearly event as Earth passes through the trail left by Comet Swift-Tuttle, a miles-wide behemoth that swings by Earth every 133 years. According to NASA, the meteor shower had more visibility this year. On average, the shower usually has 80 to 100 meteors per hour. This year, however, there were roughly 160 to 200 meteors per hour. The cause for the increase in meteors was because Jupiter’s gravity pulled pieces of the comet’s debris closer to the Earth’s path. According to NASA, there will not be another increase until 2027.

Skate for Art event is August 13