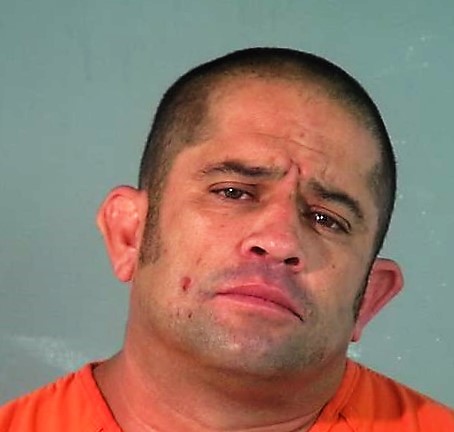 Contributed Photo/Courtesy GCSO: One day after being sentenced for assault, Michael James Quiroz was arrested and charged with aggravated assault in an unrelated case.

SAFFORD – One day after being sentenced for assault, Michael James Quiroz, 38, of Safford was back in jail Thursday after allegedly brandishing a knife at a juvenile.

It was the second attack on juveniles in less than a month for Quiroz, who pleaded guilty Wednesday to an assault stemming from an incident in July where he chased a couple of juveniles from a convenience store back to a residence. He waived his right to counsel in that case and was sentenced to probation.

On Thursday, however, Quiroz was arrested and charged with aggravated assault after a juvenile reported he had swung a knife at him.

The victim said he was walking home after football practice and was north on 10th Avenue near 10th Street at around 8:40 p.m. when he heard a woman scream. When he reached 10th Street, he looked to the east where he thought the scream came from and saw a man, later identified as Quiroz, running toward him while yelling in Spanish. Quiroz appeared to be drunk, according to the victim, and was brandishing a 4-inch silver knife.

As Quiroz approached the juvenile, the football player used his helmet as a defensive weapon and swung it at his attacker to thwart the onslaught. The juvenile then ran off and informed an adult, who called the police.

Authorities soon located Quiroz at 9th Avenue and 13th Street and noted he not only matched the physical description given by the victim but was wearing the clothes the victim described as well.

The officer reported Quiroz had a strong odor of an alcoholic beverage emanating from him, and the knife, as described by the juvenile, was located clipped onto Quiroz’s right front pocket.

The suspect denied brandishing a knife at the victim, however, and said he was the victim of two juveniles who attacked him by swinging a scooter at him.

Quiroz was booked into the Graham County Jail on a single charge of aggravated assault.