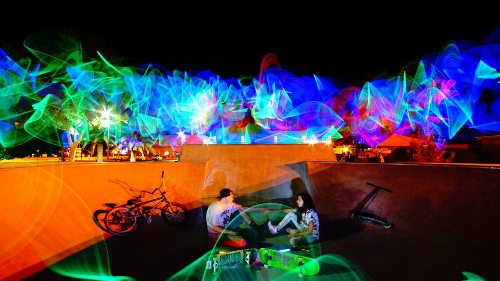 Contributed Photo/Courtesy Paul Goble: This picture shows what a light painting looks like. Artist Paul Goble is inviting users of the Safford Skatepark to join him for a photo shoot Aug. 13.

SAFFORD- A local photographer is taking his art to the next level.

Photographer Paul Goble is inviting all skaters, BMX riders and rollerbladers to the Safford Skatepark
for a photo shoot Aug. 13 at 7 p.m. Goble will be video recording during the daylight hours and at dark he will be taking light painting photos. The pictures will be used in an album to submit to possible sponsors for local skaters.

Light painting is a technique where photographers use a hand held light source while taking a long exposure photo. The photographer either illuminates an object with the light by shining the light directly into the camera or by moving the camera during exposure.

Having had a photo shoot at the skatepark earlier in the year, Goble wants to give back to the local skaters who worked with him.

“Skate for Art is an invitation for skaters to do it again,” Goble said. “The point of this event is to bring skaters to the park and so that skaters can acquire an album for a sponsorship application.”

Goble grew up in Southern California and was a skater as well. He has successful friends who are surfers and skaters and has some experience with the sport. Eventually, Goble wants to organize a skate team and get sponsors for the skaters in the community.

“It’s something healthy and productive, and I want to support that,” he said.