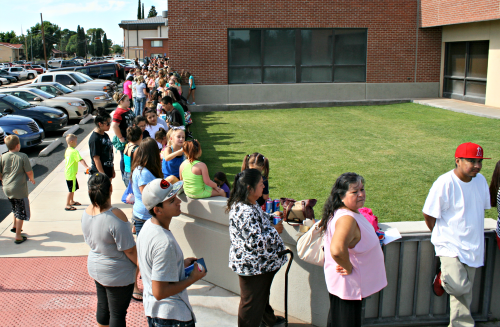 Brooke Curley Photo/Gila Valley Central.net: Gila Valley residents line up to get into the door of the resource fair at EAC on Saturday.

THATCHER – It’s time to get those pencils and books to hopefully avoid teachers’ dirty looks.

School is back in session in the Gila Valley, and the costs of school supplies and clothes can be overwhelming. That’s where the back to school resource fair came in as such a great asset to the community.

Local agencies come together at Eastern Arizona College on Saturday to give away school supplies, clothes and much more. The fair went from 10 a.m. to 2 p.m., and was open to all Graham County residents. Free backpacks were given away to the first 600 children and immunizations and sports physicals also were available.

Last year, the average parent spent roughly $100 on each child for school supplies and clothes. As each child becomes a teenager, the cost increases as the required supplies are more expensive. However, the biggest back to school shopping cost for parents is clothing and accessories for their children.

That’s where the local thrift shops stepped up for the community. Thrift store employees from the St. Vincent de Paul Society of Safford and the Graham County Rehabilitation Center were at the fair with multiple tables filled with shoes and clothes. Parents and children sifted through the clothes and shoes, searching for the gently used items that would fit their needs.

The Graham County Substance Abuse Coalition was also present and gave parents anti-drug information. Using the Above the Influence campaign, youth advocates took photos of children holding signs stating positive resolutions. These photos were printed out and presented to the children as a way of helping them stay above the influence of harmful substances.

Kathy Grimes, Director of the Graham County Substance Abuse Coalition, said the Above the Influence campaign has multiple ways of educating the youth.

“It doesn’t have to be someone telling you, ‘this is bad don’t do this,’ there are the creative ways that we can get the word out,” Grimes said.

Working with their youth advocates, Grimes said that the Substance Abuse Coalition will be anywhere it can share its work.