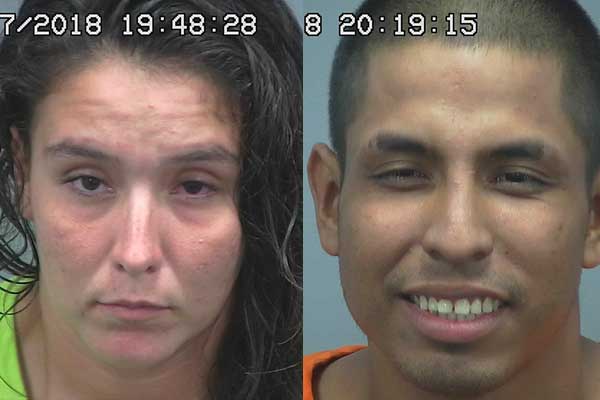 SAFFORD – Authorities were dispatched last Tuesday to Firth Park, due to the report of a male and female looking suspicious as they walked in and out of the restrooms. When the officer arrived and entered the bathroom, a couple was found standing inside a stall with the door partially ajar, doing drugs. The couple, identified through previous contact, as Joshua Merino and Donavee Perea. The officer observed Merino holding a hand sized portion of aluminum foil, using a lighter to heat the underside of the foil, while Perea was ingesting the smoke made through a cut drinking straw. As the officer began speaking to them, Perea exhaled the smoke she was ingesting.

The officer had prior knowledge of a local attempt to locate for Merino for robbery with a knife, and he was handcuffed and placed under arrest. A knife was soon found in his front pocket. Other officers arrived on scene to assist, and Perea was hancuffed also. The aluminum foil was recovered from the stall. Perea reported to authorities that the substance found was heroin and it belonged to Merino. Perea stated she had just met Merino a few hours prior. A folded piece of paper was found on the floor where Merino was handcuffed. Inside a crystal like substance was found and recognized to be methamphetamine. Perea reported that the meth also belonged to Merino, and that she and him had planned to smoke both the heroin and meth. She stated Merino had pulled the paper with the meth in it out of his sock while they were in the restroom.

While the officer spoke with Merino, it was confirmed the heroin belonged to him, but he stated the meth was not his. He denied using meth that day, but stated that he used meth a day prior. Perea and Merino were transported to the Safford Police Department, where Merino was interviewed in reference to the aggravated assault cases, while paperwork was completed on Perea. Later, they were both booked into the Graham Jail.