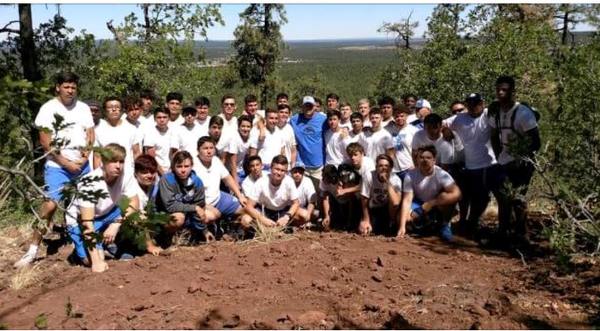 It’s not quite a complete rebuild project for new Safford football coach Eric Hjalmarson but its close. Taking over the reins of a 4-6 program usually means cleaning house and starting over. There are a few names you will recognize still around and ready to perform on Friday nights.

Eric Hjalmarson is entering his 17th year coaching football. It will be his first as a head coach. He played his prep football for Paul Moro during his run at Blue Ridge High School. You will see a lot of Moro inspired pieces to this year’s Bulldog team. From the off-season beach camp to the heavy run Wing-T offense you will see, it all screams Paul Moro.

Safford lost more than 75 percent of their offense to graduation. The team will have to replace Quarterback Manny Aparicio who is headed to Doane University in Nebraska. He was responsible for half of the team’s offensive touchdowns last season.

Offensive Coordinator Mike Dorrell will have plenty of options at running back this year to get the job done. Sophomore CJ Scrivner will most likely be the feature back this season in the Wing-T attack. He will be joined in the backfield by Junior Dylan Dorell and Sam Tobias.

Mason Duros is penciled in as the starting QB this season. He played in 6 games last year before missing the remainder of the season with an injury. He threw for 402 yards and 3 TD’s in his abbreviated season.

Safford gave up more than 30 points in 5 games last season. That number will have to vastly improve this season if the Bulldogs hope to be a playoff team.

Of the team’s top 12 tacklers last season, Dorrell and Ezra Boughner are the only two to return this season.

This Safford team might have the toughest schedule in all of the 3A. They have prepared with 2 summer camps and come in more prepared for the season that any Safford team in recent history. That being said though, a reasonable expectation for this year’s team is 5-5. If they can get to that .500 level, I believe they will get into the playoffs. That would be a huge accomplishment in Hjalmarson’s first season.