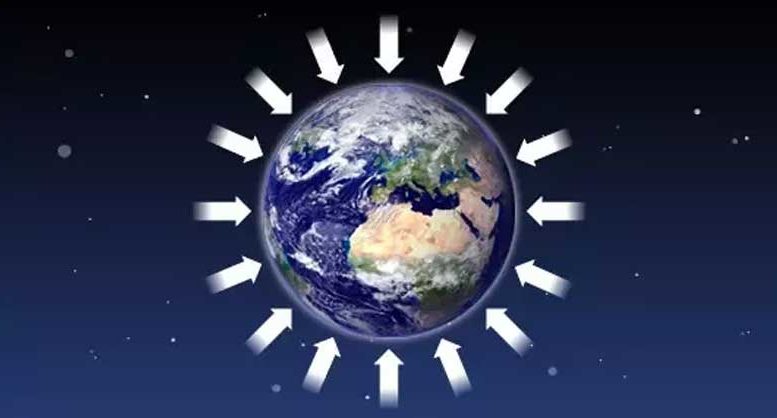 Probably like you, I hadn’t given much thought to how the Nile River in Africa, which seems to flow south to north, could go uphill to get over the Earth’s curvature Basically, water going from down to up. Or, for that matter, why the Mississippi River, flowing north to south, doesn’t ever dry up? Seems like all the water would eventually drain out. Again, flowing from top to bottom.

These questions, and similar others, routinely enter my spasmodic mind. After reviewing a few of my previous Gila Valley Central submissions, the reader has probably already realized the deteriorating condition my mental situation. I make no claims of being rational, any more than I can boast of having an exceptionally keen intellect. Nature blessed me with what I have and nothing more can be expected.

So, now that both of us realize what to expect, back to the original question: How does a 4,258-mile river in northern Africa manage to meander along a 532-mile long upgrade? In other words, the distance from the beginning of the river to the end is nearly a sixth of the distance around the entire planet. Since Earth is basically a round object, and the river is running south to north its entire length, how is it possible its waters can flow from deep inside a lower area of the African continent to dump into the Mediterranean Sea at the upper most end? Doesn’t this phenomenon defy gravity?

Since we all know water cannot flow uphill, unless aided by mechanical means, then there must be another explanation.

There is and it’s not as complex as you might think.

For the most part, gravity is an equal force pulling down on all parts of the Earth at the same time. It doesn’t matter if it’s Mount Everest or the deepest depths of the Marianas Trench. The principle difference between the two locations is their distance from the center of the earth. Obviously, the top of Mount Everest is further away from the Earth’s center than the bottom of the Marianas, but the gravitational pull is about the same.

Normally, we think in of terms of water flowing downhill or from one place to another because of gravity, which is partially correct. Actually, water doesn’t flow either downhill or uphill but follows the surface of the earth at any given location. Since all surface areas are measured by their distance from the center of the Earth – not just from the surface up – then water will flow from a point that is farther from the center of the Earth to a point that is closer. This distance can vary by as much as a few miles to as little as a fraction of an inch.

Think of mountain creeks cascading into a lower pond, which then drains into a stream that might become a tributary flowing into a lake that spills its contents into a river that eventually reaches the ocean. Each step of the way is lower in elevation than the previous one, but also closer to the center of the Earth. 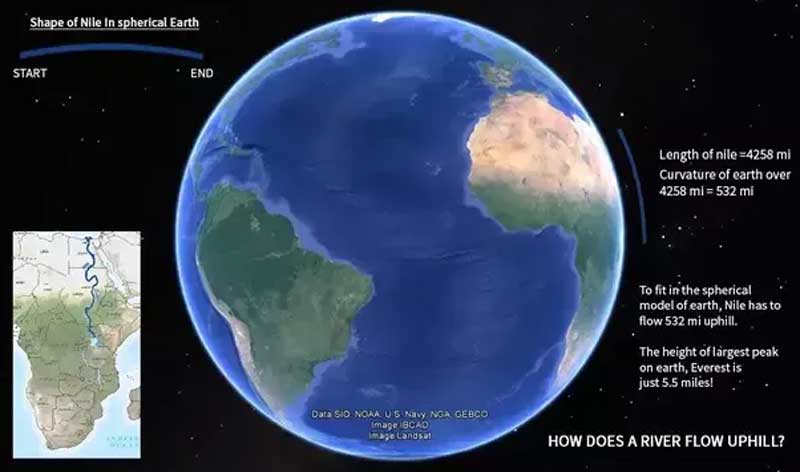 If the Earth’s surface was absolutely smooth, a drop of water would stand still, incapable of moving in any direction because of perfect equilibrium or balance. But since the Earth’s surface is mostly irregular – mountains, hills, valleys, plains, lakes, rivers, oceans – then water will always move from the most distant point of the Earth’s center to the closest.

Although we never think about it, when we routinely move about the surface we are usually moving closer or farther from the Earth’s center, regardless of the Earth’s curvature. Either direction we care to go, if we travel a mile or 10,000 miles, we will still be influenced by the same universal gravitational field. There’s no escaping it, except in special circumstances.

The same holds true for the Nile or Mississippi River. In the above illustration, the argument the Nile would have to gain 532 miles in altitude, as if climbing a hill, to compensate for the Earth’s curvature is a trick, for the simple reason, everything on the planet is attracted to the center, no matter where it may be located on the surface. Consequently, it doesn’t matter if a river flows south to north, north to south, east to west, west to east or any direction in between, or which side of the planet it may be on, gravity and elevation are the primary ingredients in determining a river’s course.

Also, in space, there really isn’t any compass reference points. The North Star is north to us, as is the North Pole, the sun rises in the east and left leaning politics. These are man-created concepts to aid in navigation or description of something. The Nile appears to flow south to north, but in space, it doesn’t make any difference, nor does gravity care since it’s constantly exerting the same amount of force on Earth’s entire surface area.

Now that we’ve solved this dilemma, deciphering the income tax law will require considerably more skill and patience and maybe the use of a super computer.