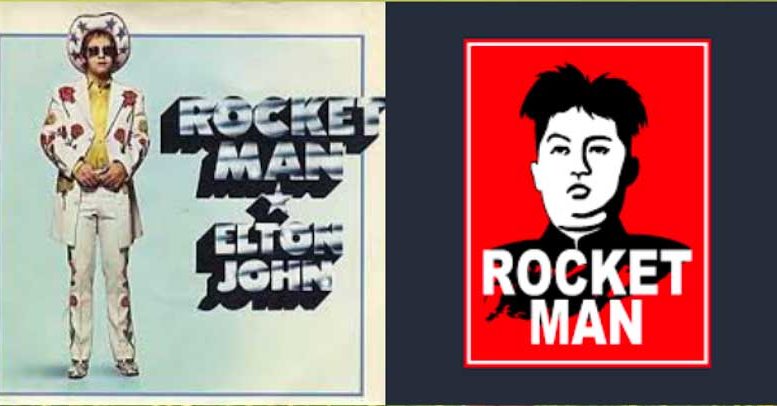 Who is the real Rocket Man?

“I’m not the man they think I am at home, and all this science I don’t understand; It’s just my job five days a week, Rocket Man burning out his fuse up here alone; Oh no, no, no, I’m a Rocket Man” – “Rocket Man,” Elton John, 1972

President Trump’s recent comparison of Kim to Elton’s lyrics is not as far-fetched as previously imagined. Lil’ Kim has become the newest “Rocket Man Club” member in an exclusive and very lethal fraternity.

Unlike other associates of the group, Kim is not shy about announcing his intended ambitions or regularly conducting missile launches and underground nuclear testing as a public demonstration of his country’s advancing military capabilities.

For anyone interested, Kim was born on January 8, 1984 (or July 5, 1984 – even his birthday is shrouded in mystery) making him born under the Chinese sign of the Pig/Boar, or a Capricorn in astrology terminology.

Kim ascended to authority upon the death of his father, Kim Jong-il, in December 2011. In consolidating his power, he is believed to have ordered the execution of his uncle in March 2014 and his half-brother in February 2017. Lil’ Kim holds numerous North Korean government titles and is often referred to as Marshall Kim Jong-un or simply “the Marshall” by the state-run press.

Now, he can add “Rocket Man” to the list.

After over 25 years of appeasement and financial assistance from the West and United States – all the while researching and developing nuclear weaponry – North Korea has recently been displaying its military prowess by brazenly launching short, medium and long-range missiles. Kim has boasted North Korea has the capability to strike multiple targets, including the U.S. territory of Guam and state of Hawaii. At least twice, North Korea has sent rockets flying over the nearby country of Japan. Not a good idea if trying to maintain diplomatic harmony, particularly with a local rival.

Imagine for a moment, the response the United States would initiate if two foreign ballistic missiles were detected suddenly passing over downtown Phoenix or other metropolitan and rural areas? Yet, this is exactly what Lil’ Kim is threatening to do and has already done to his Japanese neighbors.

Wars have been started with less provocation.

Not to be outmatched by Trump’s sarcastic statements, Kim has countered with a few barbs of his own, calling the president “a frightened dog” and “a gangster fond of playing with fire.”

As the rhetoric ratchets-up between the two leaders, Kim slammed Trump’s mental stability and age when he promised, “I will surely and definitely tame the mentally deranged U.S. dotard with fire.”  A “dotard” is an archaic term associated with the elderly and feeble-minded.

Shortly thereafter, North Korea announced it may test a hydrogen bomb somewhere over the Pacific Ocean. “It could be the most powerful detonation of an H-bomb in the Pacific,” said North Korea’s Foreign Minister Ri Yong Ho. The final decision to explode the bomb is apparently Kim’s to make.

President Trump has correctly stated the United States could easily obliterate North Korea if it was forced into a defensive retaliation. Nearly everyone recognizes this and Kim no longer has the advantage of relying on the indifferent attitude of our squeamish previous president.  This time, a “line in the sand” might actually mean something. If Kim anticipates surviving to retirement age – which in dictator terms could be anytime between today and tomorrow – he might consider giving serious consideration to the number of nukes he possesses compared to the overwhelming arsenal of the United States.

Even with behind the scenes assistance from Iran and China, North Korea could still be vaporized as a sacrificial lamb. Let’s face it, Lil Kim’s military and his primitive economy don’t have the ability to develop and manufacture weapons of mass destruction without a little help from a few friends. And when these assumed friends begin realizing Kim’s craziness could be endangering them also, then the game begins to take on an entirely different perspective. It’s one thing to rave, rant and threaten nuclear annihilation, it’s quite another to possibly be on the receiving end of it.

Kim may fantasize over a nuclear shootout, but the odds of him surviving such a conflagration appear remote. The Empire of Japan learned this painful lesson nearly 75 years ago when atomic bombs were not as destructive as today’s versions.

As a suggestion, reaching dotard age sure beats being instantly incinerated in a nuclear flash. The center of an exploding fission bomb – atomic detonation – can exceed 100,000,000 degrees. That’s 100 million degrees Fahrenheit.

It’s considerably warmer than a day at the beach, or flipping burgers over a backyard barbeque grill, or even the interior of a UPS delivery van in mid-July. Prodding the United States into a nuclear confrontation from the temporary safety of a North Korean underground bunker would be a very fatal and short-lived mistake.

As they say, “Careful what ya wish for” Mr. Kim, and remember, rockets can fly both directions!