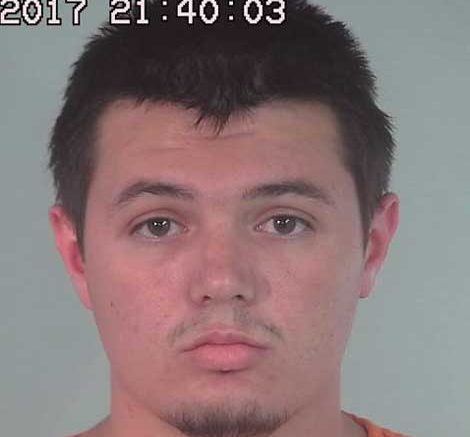 Contributed Photo/Courtesy GCSO: Kyle Turner was jailed after riding his dirt bike recklessly on U.S. Highway 70 and running from police.

SAFFORD – It’s hard to pull off a wheelie in jail.

Kyle Turner, 20, was booked into the Graham County Jail on Friday after allegedly riding recklessly and fleeing from the police. A second motorcyclist, Jacob Pedregon, 20, was given traffic citations and released.

According to a Safford Police report, a patrol officer was sitting in the Dairy Queen driver through at about noon when he noticed two men on dirt bikes eastbound on U.S. Highway 70. After stopping at the traffic light at 8th Avenue, the bikes continued eastbound and one of them performed two wheelies in heavy traffic.

The officer then attempted to perform a traffic stop, but the motorcyclist who performed the wheelie (Turner) refused to yield and ran a red stop light while turning south onto U.S. Highway 191 (1st Avenue.) Turner then went east on Main Street then south toward U.S. Highway 70 again. At that time, the officer, who was fully engaged with lights and sirens, was instructed to discontinue the pursuit. For the whole time, Turner wasn’t speeding, but just wouldn’t pull over to the side.

The officer continued to follow the dirt bike without his lights and sirens as it turned onto Hollywood Road. The officer motioned for Turner to pull over but he shook his head no and turned off the road onto the dirt and headed toward the Gila River.

At that point, the officer returned to U.S. Highway 70 and 3rd Avenue where Pedregon had pulled over and questioned him about Turner.

Pedregon said he was on leave from the Marines and was stationed at 29 Palms, Calif. He said Kyle had stayed the night with him at his grandfather’s house in Solomon and they were just heading home from McDonald’s. He advised he didn’t know Kyle’s last name or why he wouldn’t pull over.

When speaking with Pedregon, the officer noticed an odor of an alcoholic beverage, and Pedregon allegedly admitted to drinking alcohol the previous night but none since he woke up. He was given a portable breath test, which showed a breath/alcohol concentration of .025. He was then arrested and transported to the Safford Police Department.

While speaking with Pedregon at the police department, more information was learned that ultimately led to the officers learning Kyle’s last name was Turner. After contacting Turner’s mother, the officers learned he was back at the house in Solomon and he was taken into custody.

While the officer could have given a citation to Pedregon for an underage alcohol violation of having the presence of any alcohol in his body, they decided to give him citations for not having registration and no proof of insurance on the dirt bike he was riding and he was released.

Turner advised he was just “having a little fun” when he did the wheelie and that he got “freaked out” when he saw the officer and decided to not stop.

Turner was then booked into the Graham County Jail on charges of unlawful flight from pursuing law enforcement and reckless driving.