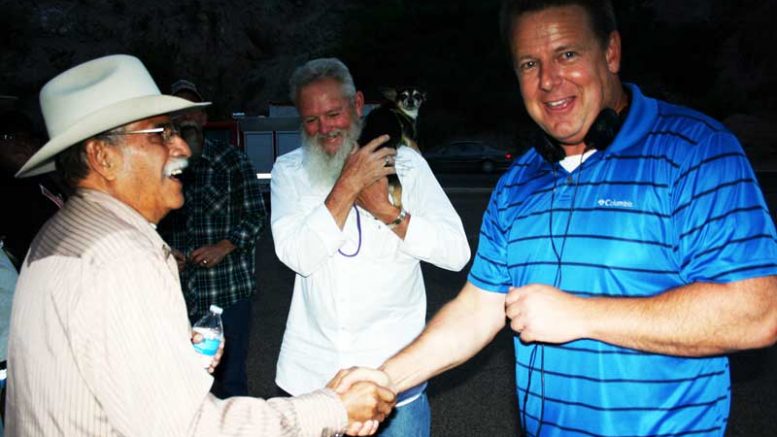 Photo By Gualterio Casias: Frank "Pancho" Gonzales, left, shares a light moment with local musician Gene Roland, center, and producer Chad Harris, after a showing of a documentary about Clifton at the Clifton Train Station on Friday, April 21. Gonzales and Roland ("Papa Gene") were included in the documentary, which is the first in a 10-part biographical series of small towns in the American southwest that will air on Amazon Prime.

Film to show on Amazon Prime as start of biographical series

One would have thought the occasion was a festival. In a way, the Friday, April 21, event showcasing the premiere of a documentary featuring Clifton and its inhabitants was very much akin to a celebration. Children, overseen by parents, played on the lawn, and Clifton firefighters sold $1 hamburgers and offered free ice cream bars. 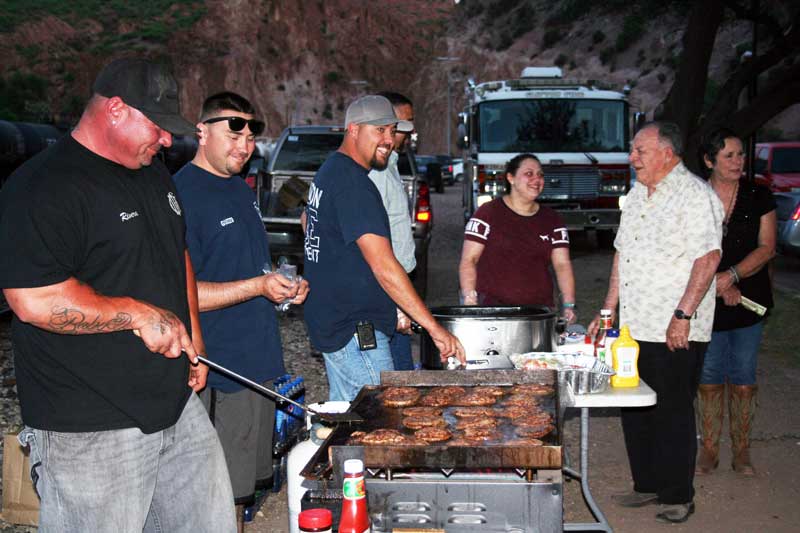 Photo By Gualterio Casias: Clifton firefighters prepare hamburgers for those who saw the documentary on Clifton presented Friday, April 21, at the Clifton Train Station. The firefighters were almost overwhelmed by the number of people seeking the $1 burgers sold after the showing. People stood patiently in a long line but said it was well worth the wait. Bashas’ of Morenci and Freeport McMoRan-Morenci chipped in toward the effort. People were delighted that ice cream bars were free.

That was what was happening outside the Clifton Train Depot. Inside the historic train station, it was standing-room-only. The crowd came to view the premier showing of Towns, a documentary of towns with less populations than they had a century ago made for Amazon Prime. Clifton was chosen as the first town to be part of the 10-part biographical series’ first season. 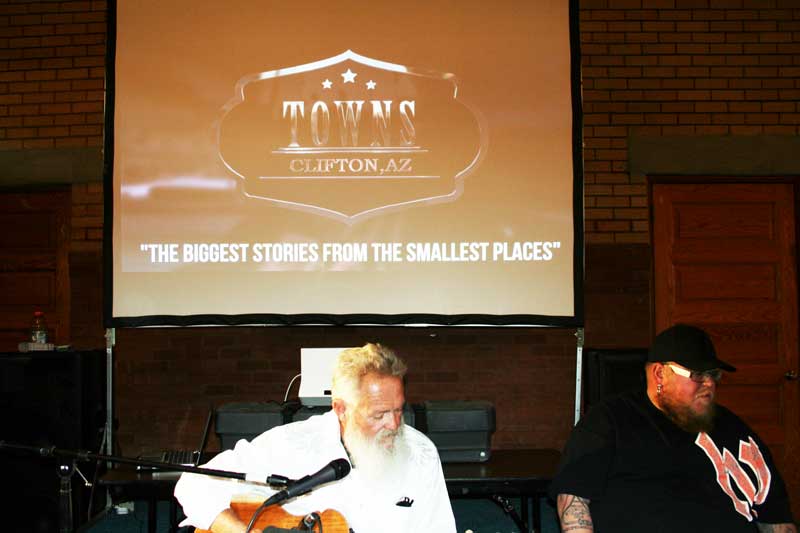 Photo By Gualterio Casias: Local musician Gene Roland plays his guitar, accompanied by a companion on vocals, as part of a warm up leading to the presentation of a documentary-style presentation about Clifton on April 21. The theme of the presentation by Hotseat Media, is “Biggest Stories From The Smallest Towns.” Clifton was selected as the first of a 10-part series of small towns in Arizona and New Mexico for the series on Amazon Prime.

The film was made by Hotseat Media, a Mesa-based company. The Clifton documentary will be aired on the popular website Amazon Prime. Upon logging onto the website, viewers should then click on Towns or search “Towns”  and you will see the Episode 1 poster of historic Chase Creek Street. At present, only the trailer for the documentary is available, but the film should be up by week’s end. It will then be aired worldwide. Those who would like more information can visit TownsTV.com, which also has a link to the show. 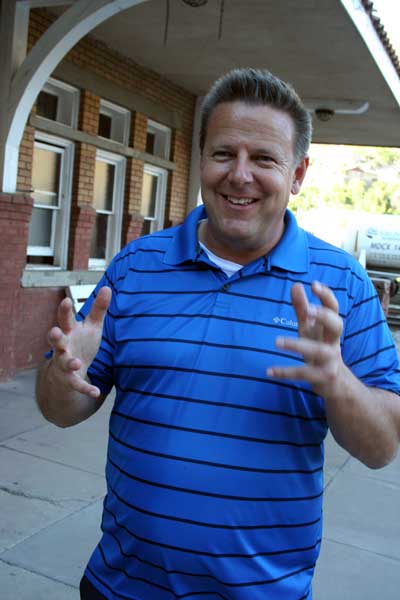 Photo By Gualterio Casias: Producer Chad Harris of Hotseat Media explains why he selected Clifton as the first in a 10-part documentary series for Amazon Prime. He said he and videographer/director Leonardo Buono were deeply impressed with Clifton’s beauty and the openness and friendliness of it its people.

Producer Chad Harris said the focus of the series, “Biggest Stories From The Smallest Towns,”  is on small towns and their uniqueness. He termed Clifton as “very unique,” and spoke about the town’s natural beauty, along with the openness and friendliness of its people. The film included interviews with locals, including Clifton Mayor Felix Callicotte who was interviewed along with barber Edward Nabor as Nabor cut the mayor’s hair at Nabor’s Corner Barber Shop.

Among others featured in the film were Frank “Pancho” Gonzales of Shannon Hill, historian Don Lunt, resident Jacques Bergman, Town Manager Ian McGaughey and musician Gene Roland, who also happens to be a photographer. Roland, playing his guitar, and a companion warmed up the crowd prior to the film’s showing. Harris referred to Roland as “Papa Gene.”

Dr. Lawrence Gaskin received kudos from Harris and appreciative applause for helping direct Harris to those interviewed as well as many others with whom Harris and videographer/director Leonardo Buono spoke with. Harris said he and Buono spent 48 hours in Clifton and had a tremendous amount of footage. From there, it was a matter of cutting to make the piece a little more than 20 minutes long.

None of it was boring. Something never before seen in other documentaries made about Clifton was Buono’s use of  a camera-equipped drone, which he used to take some very spectacular footage of the town. One particular eye-catching scene was of the top of the Zorrilla Bridge looking downstream at the San Francisco River. That, however, is not the only spectacular scenery provided by the drone. 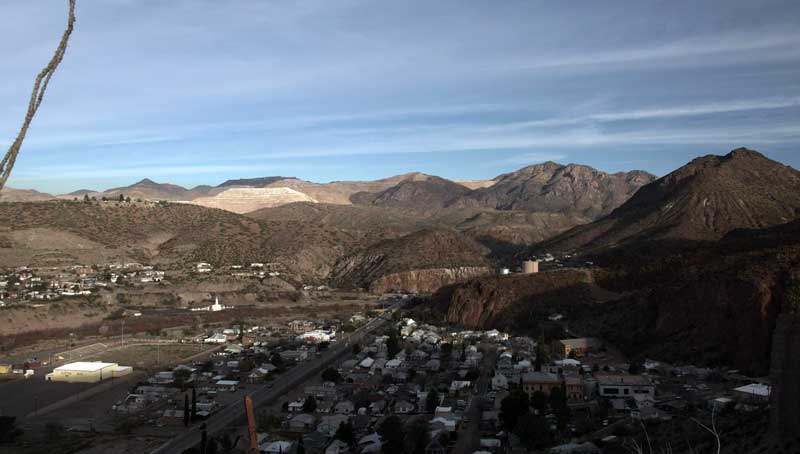 Contributed Photo Courtesy Chad Harris and Amazon: This screenshot shows one part of drone footage used in the documentary.

Following the documentary’s premiere, a reporter asked the mayor what it was like being interviewed while having his hair cut. He answered jokingly, “Well, there’s no better place to be interviewed than when you’re having a haircut, is there? And a good haircut at that.” 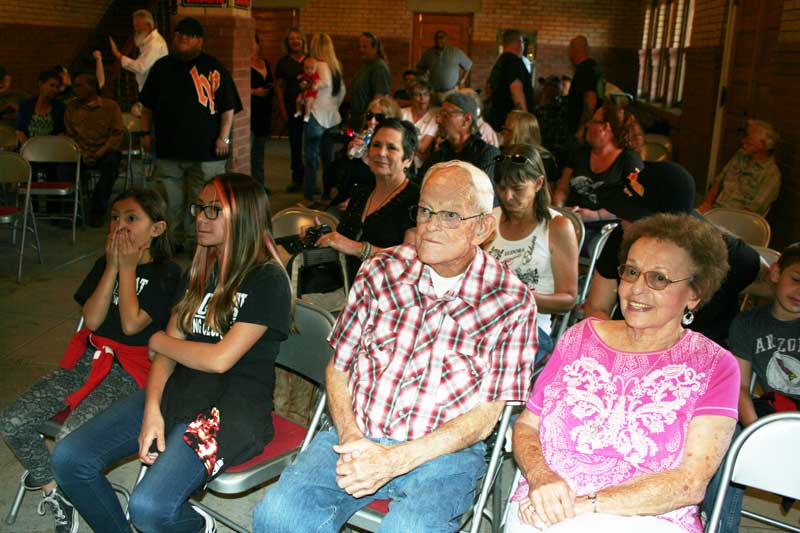 Photo By Gualterio Casias: Longtime Clifton residents Don and Josephine Lunt await the showing of a documentary-style presentation of Clifton presented April 21 at the Clifton Train Station. Lunt, the local historian, was featured in the presentation, which will be aired on Amazon Prime.

One Clifton resident commented that the scene was something “like you might have seen in Mayberry. You know, the Andy Griffith show with Floyd the barber cutting Andy’s hair. I guess in a way we’re something of a Mayberry, which I think is a good thing. It’s very small town, and it’s good to see there are still things like this in small-town America.”