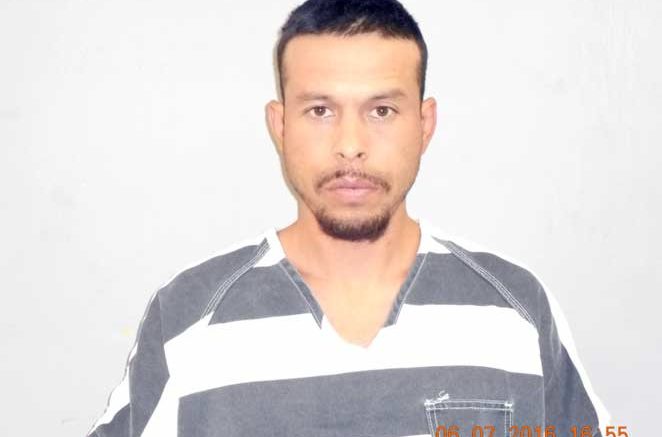 Contributed Photo/Courtesy Greenlee County Sheriff's Office: Jacob Roybal is accused of stealing $90,000 in cash as well as jewelry, electronics and more items from an elderly woman. He was apprehended in Tucson and is awaiting completion of drug charges there before being adjudicated on the burglary charges in Clifton.

CLIFTON – A Clifton man who allegedly used money stolen from an elderly woman to buy a new pickup truck in Tucson is in Pima County Jail awaiting extradition to Clifton. First, he must satisfy charges against him in Tucson.

Jacob Christopher Roybal, 39, is charged with stealing five counts of burglary in the third degree, two counts of conspiracy and possession of burglary tools regarding the theft of $90,000 in cash and additional jewelry from the Clifton woman. There were reportedly several other items, including two television sets, taken from the home.

The burglary actually occurred in October 2016 and Roybal was taken into custody Nov. 4, 2016.

It was an exhaustive investigation by Clifton Police that finally led to Roybal. The burglary occurred when the woman was out of town, and Roybal had already begun to spend his ill-gotten gains before the burglary was ever reported. Police followed several clues during their investigation that included learning Roybal had patronized some Clifton businesses and at times used $50 and $100 bills to pay for items.

A major factor in solving the case was that Roybal paid $56,000 in cash when he bought a brand new pickup truck at the Tucson auto dealership, O’Reilly Chevr0let. That drew suspicion by Tucson Police who were notified by the dealership about the cash transaction. A law enforcement network put Tucson Police in touch with Clifton.

Clifton Police traveled to Tucson with a warrant for Roybal’s arrest. They had planned to arrest the man at his home and were to be assisted by a Tucson Police SWAT team as Roybal was believed to have weapons in his home. However, Roybal was arrested by Tucson officers at a car wash after tracking the pickup truck via an OnStar location system with which the vehicle was equipped.

Armed with a warrant to search Roybal’s residence Clifton Police did find two weapons, one of which was a shotgun stored in a closet.

Clifton Police Chief Omar Negrete said a substantial amount of the money stolen by from the woman was recovered. It was placed in a special victims fund overseen by the Greenlee County Attorney’s Office. Some of the stolen jewelry was also recovered. Police reports did not include the estimated value of the jewelry which police referred to as appearing “old”, however, according to a judgment by the Maricopa County Superior Court filed July 18, the victim’s total loss was between $125,000 to $150,000. An auction of the seized property from Roybal was held March 17, and the proceeds totaling nearly $99,000 was given to the victim.

According to police reports, the woman did have a security camera to monitor any movement on her property. Police said that two people were seen on the woman’s property the night of the burglary, but they were wearing masks and gloves.

Roybal is also a suspect in break-ins at a storage facility. Several lockers were broken into and again, the two persons caught on a security camera were wearing masks and gloves. Those break-ins occurred before the burglary at the elderly woman’s home.

Negrete commended the diligence of his officers along with that of deputies from the Greenlee County sheriff’s office and the County Attorney’s investigator. “They all worked hard putting their time and effort into solving this case,” said Negrete. “We’re very grateful for all of the agencies involved, certainly including those in Tucson.”

Roybal is currently being held in the Pima County Jail awaiting adjudication on charges of possession of a dangerous drug (methamphetamine) for sale and misconduct involving weapons. His next hearing is a pretrial conference scheduled for Aug. 14 at 9 a.m. After his charges in Pima County are settled, his burglary case in Greenlee County will continue.