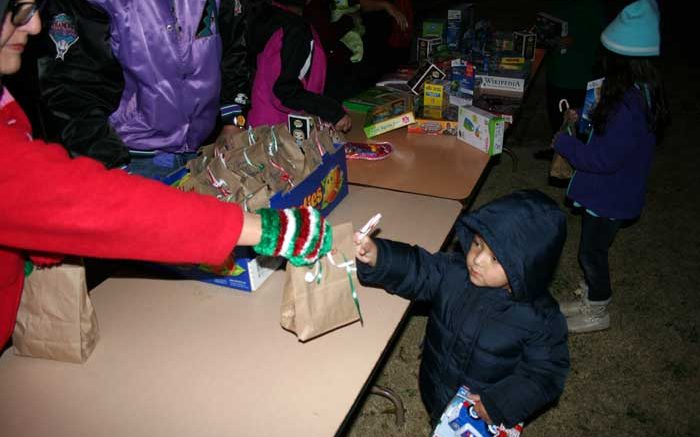 Photo By Walter Mares: Patricia Avila, left, hands a child a bag of candy during the American Legion Post 28 annual Christmas party at Al Fernandez Park in Clifton. There were also plenty of toys for little ones. Rain had been predicted, but it stayed away until well after the party.

The spoiler did not show until well after it was all over. The spoiler? That was heavy rainfall and strong winds that were predicted to hit Clifton and the rest of Greenlee County on Christmas Eve.

The wind and rain stayed away as the American Legion Post 28 and the Clifton Fire Department delighted children – and their parents – with gifts, bags of candy and the appearance of Santa Claus. 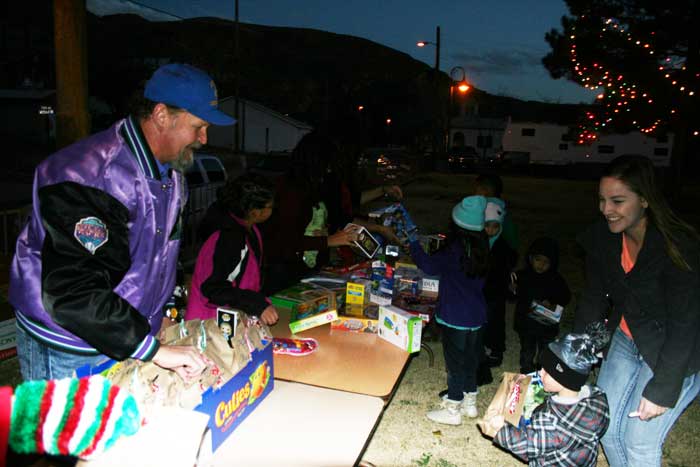 Photo By Walter Mares: American Legion Post 28 Bill Carlson, left, passes out a bag of candy to a child, who with his mother are all smiles. The annual Legion party held on Christmas Eve at Al Fernandez Park in Clifton provided toys and other goodies for kids. Many parents commented on the quality and amount of toys provided by the Legion.

Christmas Eve marked the 86th year of the Legion’s tradition of giving toys and candy to children. The event began in Morenci in 1931. Post 28 moved its headquarters to Clifton around 1983.  No doubt many of the parents present this Christmas Eve were among those who attended the party when they were children.

The fun started at 5 p.m., just before sundown, and everyone parted ways by about 6 p.m. and headed out for the warmth of home.

The event has for years been organized by longtime Legionnaire Joe Apodaca. A post spokesman said the toys handed out this year were made available by the U.S. Marine Corps’ Toys for Tots program. The spokesman said 250 children participated in the party. 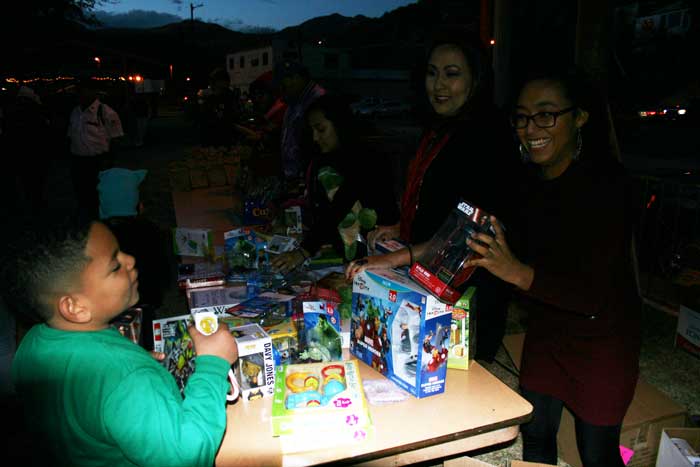 Photo By Walter Mares: Children, such as this one, were delighted as they received toys and bags of candy at the American Legion Post 28 Christmas Eve party. The annual event was again held at Al Fernandez Park.

Legionnaire R.T. Jackson said, “Everyone left with a big smile on his or her face. That included not only children but also parents, Legionnaires and Legion Auxiliary members who helped distribute toys and candy.” 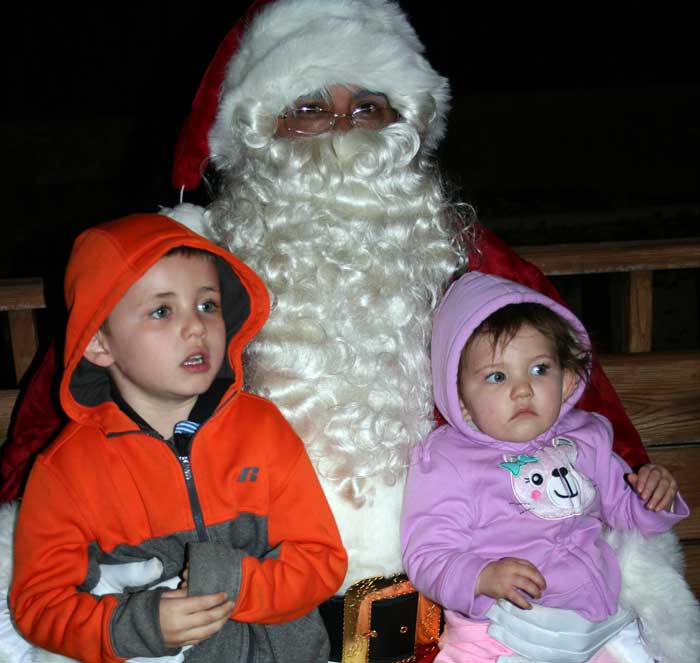 Photo By Walter Mares: This boy and girl are held by Santa Claus after they told him their Christmas wishes. The Clifton Fire Department brought Santa to Clifton to provide a special treat to the many children who visited with him.He held court in the gazebo at Al Fernandez Park in Clifton.

The Legion party was not the only big treat for children who were at the park. Santa Claus sat under a gazebo and welcomed children to sit on his lap. Once there they told him of their Christmas wishes. Not all were able to communicate verbally with him as some as some were only a year or two out of the cradle. That was fine as far as many parents and grandparents were concerned. There was flash after flash as adults used their cell phones to take photos of their little ones with the jolly old man.

The firemen took Santa for a cruise around town earlier in the day. A firetruck’s siren announced his arrival in Clifton neighborhoods. Those who heard the call ran out and were immediately treated with candy thrown from the firetruck.

Hector Morales of the Clifton Fire Department played a special role in bringing Santa all the way from the North Pole to Clifton for the special occasion. Other firemen who pitched in their time and were present were Damian Rivera, Mike Basteen, Robert Gomez, Steven Madrid and Julian Gomez. 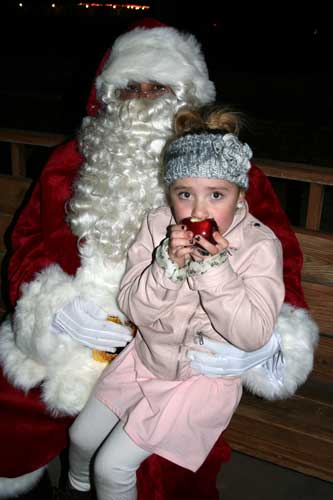 Photo By Walter Mares: This little girl is not distracted from her apple as she meet Santa Claus on Christmas Eve at Al Fernandez Park in Clifton. Clifton fireman were able to attract Santa Claus to Clifton to meet and greet many younger children. Fireman Hector Morales played a big part in bringing the jolly old man to Clifton.

At the gazebo, one mother said to an elderly lady, perhaps her mother, that Robert Gomez has been with the fire department for so long she wondered how many times he had met Santa in person and if he had ever been invited to the North Pole. Then the women laughed merrily as they hugged each other.

The wind began kicking up and many started eying the sky. Some stars were still visible but clouds were quickly arriving. Rain began falling around 10 p.m. The park was empty by then. Undoubtedly, children were sitting or sleeping comfortable in their nice, warm homes.

“Who knows what the children dreamed about, but some probably had a bit of a problem falling asleep because they were anxious to see what Santa Claus brought them on Christmas morning,” Jackson said.