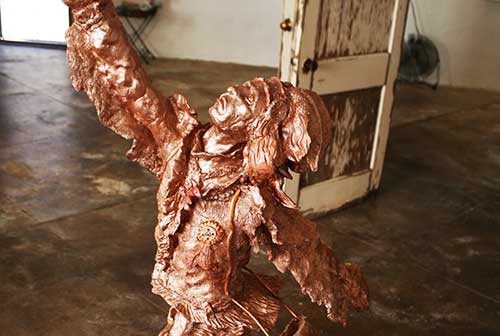 Brooke Curley Photo/Gila Valley Central: Jerry Berg's bronze sculpture "On Eagle's Wings" was one of the many works of art on display at this year's Colors of Copper Art Gala.

CLIFTON- It was a beautiful day for an art gala.

Saturday was the fourth annual Colors of Copper Art Gala in Clifton. The Gala went on over a two-day period and was located in the Galleria Coronado in the historic Chase Creek area. Local artists and those from out of state participated in the event, numbering 27 in all. Many of the art pieces were for sale, with the most expensive piece listed at $1,500, while the least expensive was $77.

Karen Stephenson was the individual in charge of the art submissions. He told Gila Valley Central that there were many submissions this year made up of a variety of mediums.

“This year we’ve had a wide variety of many types of sculpture, (including) brass, bronze and copper,” Stephenson said.  “We (also) had pastels, oils, acrylics and pottery.”

When asked about the origins of the artists, Stephenson said four nearby states were represented, as well as Illinois. The gala also included an art competition with the first place winner receiving $1,000. When asked what the art entries were judged upon, Stephenson said that winning artwork had to have several key aspects.

“The criteria is the adherence to the theme of the show, which is the color of copper, and there is a huge range of color because of the oxidation and different chemical reactions,” Stephenson said.  “And originality of artwork, and the execution of the artwork, which has to do with technique and overall presentation, (and) framing (are) important element(s) of that too.”

There were three judges for the art completion. Before the judges made their final decision, they were allotted three hours of deliberation. Each judge is a professional artist, having traveled from Silver City, New Mexico and Ajo. 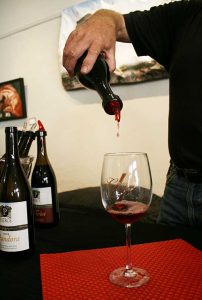 Brooke Curley Photo/Gila Valley Central: Highlights Wines was one of the three wineries at the gala. 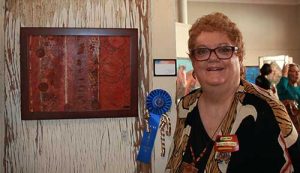 Artist Linda Foute took home the $1,000 prize for first place. She told Gila Valley Central that she was amazed she came away with the coveted prize.

“I can’t believe I won because there are so many more fantastic artists in this world than me,” Foute said. “I didn’t have any pre-planned idea for it; I just let it flow off my fingertips.”

Foute said at the time she created the winning piece, she had only been painting for three months. Usually, her preferred medium is clay on gourds and woven baskets. Foute calls herself a fiber artist.

There were three wineries present at the Gala as well that provided a wine tasting to attendees. Each of the wineries traveled from the Sonoita and Willcox area.

The wineries attended the gala to support the Clifton Colors of Copper. Individuals interested in the wine tasting could pay for a certain amount of tickets enabling them to partake in any particular wine that interested them.

Dr. Suzanne Menges, owner of Black Hills Catering, directed the gala this year. She told Gila Valley Central that one of the newer aspects of the gala was the food court.

“The food court is actually four different vendors,” Menges said. (The) Duncan’s women’s club is known for its soups and chilies. Any nonprofit that wanted to come could come, and I was excited that we had a whole meal.”

Menges told Gila Valley that her dream for the historical Clifton area is to see it developed into an array of shops that local businesses customize to fit the owners’ personal tastes for the town.

“It’s my dream to develop this area,” Menges said.  “We want to keep its authenticity. We don’t want necessarily chain stores and chain restaurants and chain hotels. (We want to) keep our uniqueness. Most of us are here because we want to be here. I don’t even live in town, but I love where I am and enjoy coming into Clifton. I enjoy the history and we’ve got other people around, and I think once we just start the ball rolling other people will join in. That’s what I hope.”