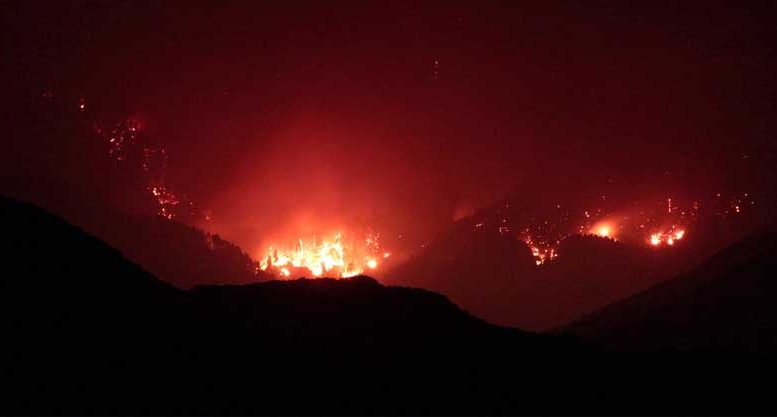 Photo By Eric Burk: The Frye Fire burns trees on its eastern front as seen from Artesia early Sunday morning. The fire is now at 46,074 acres and is still threatening Turkey Flat.

MOUNT GRAHAM – The battle for Turkey Flat continues today as firefighters are attempting to hold the Frye Fire at Twilight Creek, where the 2004 Nuttall Complex Fire burned and therefore has a reduction of fuels.

As of Monday, the fire was listed at 46,074 acres with 45 percent containment. The estimated cost to fight the fire has grown to $16.8 million.

The arrival of the fire in Twilight Creek canceled a planned back burn operation and helicopters were utilized instead to “check” the fire with water bucket drops. The drops have so far been successful at keeping the fire in the drainage, according to the Forest Service. The area is less than half a mile from residences at Turkey Flat.

Crews continue to prepare to make their stand at the Nuttall Complex fire lines, which are significant, as other suppression techniques, including sprinklers, hand-dug fire lines and small tree and low-limb removal, have been completed in preparation for the fire’s arrival. The goal is to keep it as a low-intensity ground fire and not let it get into the tree tops and become a high-intensity, damaging fire. Low-intensity fires are generally beneficial to a forest.

According to a news release, the fire remained in Twilight Creek as of Monday morning and Single Engine Air Tankers and helicopters will continue operations on the fire in that area throughout the day. Additionally a portable retardant plant at Fort Grant is available as of Monday morning to supplement the helicopter operations in Twilight Creek, Wet Creek, Grant Creek and other locations, according to the release.

Community members have issued their concerns about why aerial retardant slurries were not immediately dropped when the fire first began, believing that it would have easily put out the then small fire. However, fire officials have downplayed the effectiveness of a retardant drop without having firefighters in the area to battle the fire as well.

Contributed Photo/ Courtesy LBTO (K. Newton): An air tanker makes a fire retardant slurry drop next to the MGIO to help stop the fire and save the observatory June 18.

An example of this situation is the Burro Fire on Mount Lemmon that has jumped to 14,000 acres after just starting Friday. The Type 1 Incident Management Team commander fighting that fire, Bea Day, told the Arizona Daily Star how early efforts to use retardant to slow it were unsuccessful.

There are currently five active wildfires in the Coronado National Forest as June ended being its hottest recorded weather in 130 years.

Other fires include the Goodwin Fire in the Prescott National Forest, which has burned more than 28,000 acres, and the Hilltop Fire on the San Carlos Reservation, which is burning north of San Carlos and has scorched nearly 9,000 acres. 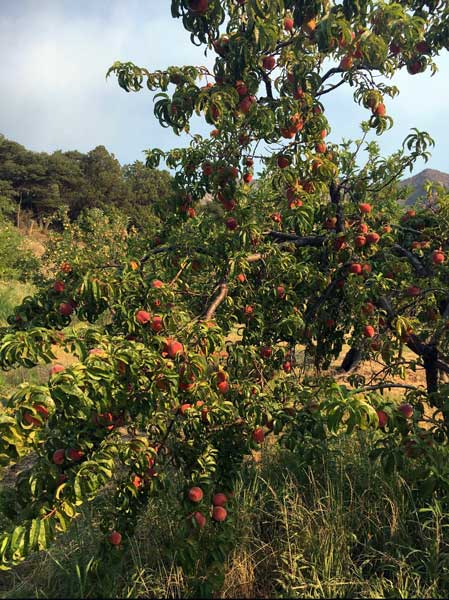 Contributed Photo/Courtesy Angle Orchard: The historic Angle Orchard is receiving some of the same protections as the cabins at Turkey Flat. It has harvested some peaches as the trees, for now, are enjoying the extra water.

Like Turkey Flat, firefighters have been diligently fighting to protect the historic orchard with fire lines and other suppression techniques, including staging portable water stations and setting up sprinkler systems.

The orchard harvested some peaches and sold them at a discounted price, Saturday.

On the western front, helicopters have continued to battle the fire with aerial drops as the fire continues to back down slope in canyons across its southern edge.

Old Columbine cabin owner Daryl Weech told Gila Valley Central that a good number of trees did not get burned as it went through the Old Columbine area, and that the fire seemed to clean up and clear out the area of debris he had been unsuccessfully petitioning to clean up for quite some time. He said while there are a number of blackened trees, the fire burned in a mosaic pattern and kind of went around Old Columbine for the most part.

Old Columbine does sport the only structure listed as being lost in the fire to date, a water chlorinator shed. The Webb Peak Lookout Tower has also been listed as being burned, but not totally lost.