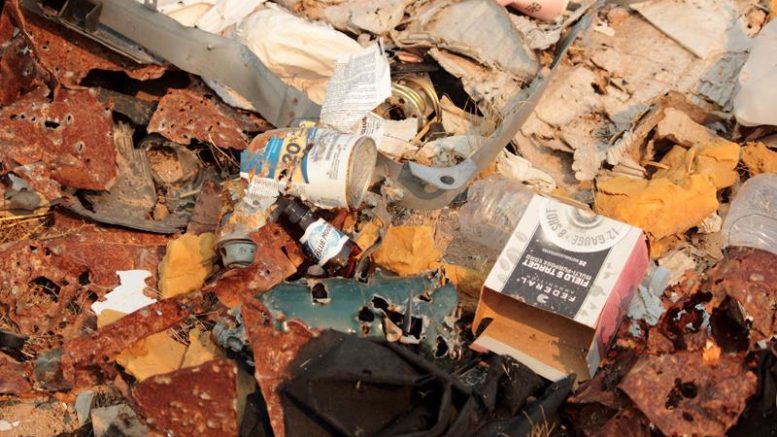 Eric Burk Photo/Gila Valley Central: The Gila Valley is littered with bullet-pocked household debris, mixed with spent shells and beer bottles, as seen in this June 30 photo taken near Artesia.

Graham County – Drive down any dirt road leading out of Safford into the desert, and you can see the same thing: discarded tires, bullet-riddled appliances, empty shotgun shells, animal parts, chemical containers, construction materials and even household trash. The Gila Valley’s most critical asset, the life-bringing Gila River, has its banks littered with trash along ATV trails and farm roads, representing an ecological disaster that, in terms of both time and acreage, rivals the 45,000-acre Frye Fire.

It takes 10 to 20 years for something as flimsy as a plastic bag to decompose, according to data from the U.S. National Park Service. Plastic bottles can last 450 years, and glass bottles can theoretically last 1 million years. One organization working to clean up Graham County is Southeastern Arizona Clean and Beautiful. SEACAB founder Jay Rasco said there are more illegal dumps in the Gila Valley than he can count. Rasco thinks it is mostly individuals dumping illegally, although a few businesses and farmers may also be contributing. 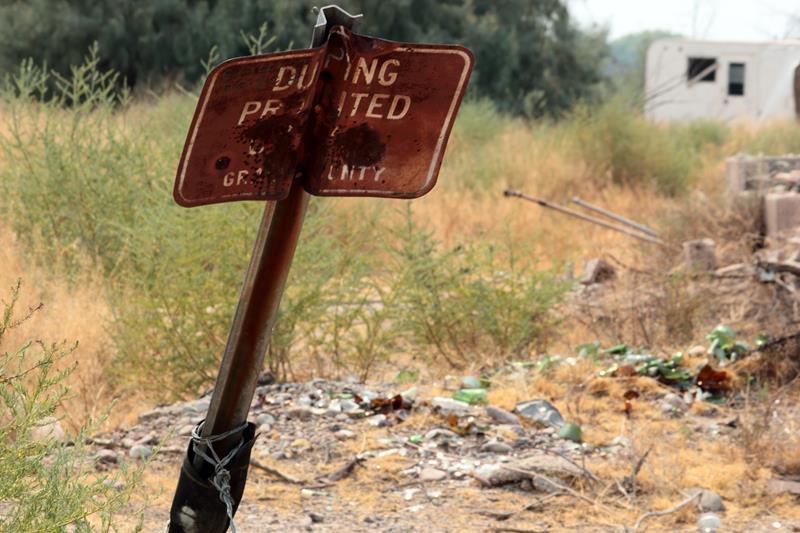 Eric Burk Photo/Gila Valley Central: The glass bottles visible in the background of this June 30 image of an illegal dump site in Little Hollywood may last 1 million years.

Ron Howard owns a farm in Central, and he has a dump on his property that he created just for concrete and similar material for a flood control berm. He says he is legally allowed to dump those materials, but that trash and other debris are illegal.

“I’ve told my son-in-law, (Nathan Buhr), that he can dump all his construction stuff in there,” Howard said. “Unfortunately, there have been other people dropping their garbage in there.”

Buhr, who owns BNT Construction, emphasized that he is careful to be legal and responsible with what he dumps.

“We have never dumped roofing materials out there,” Buhr said. “I have dumped dirt, and concrete, and grass, and brush, all biodegradable.” 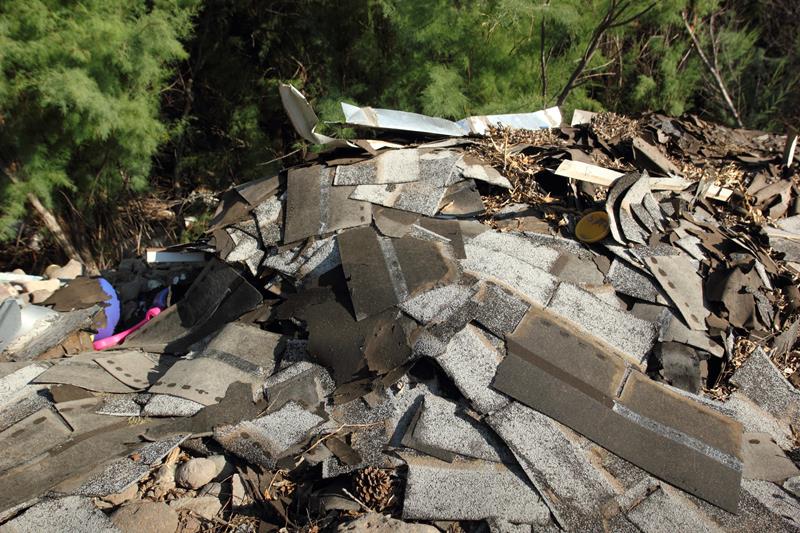 Eric Burk Photo/Gila Valley Central: A pile of asphalt shingles sits in the middle of the Howard dump site in this May 23 photo.

Gila Valley Central visited the dump in May, and, in addition to concrete and dirt, saw tires, an empty five-gallon-bucket for motor oil, asphalt shingles, an abandoned hot tub and lots of household trash. Howard says he is working with both the Graham County Sheriff’s Office and the Pima Police Department to catch people dumping trash on his property, but it is difficult to catch someone in the act.

At an illegal dump near the Reay Lane Bridge, people have left large piles of rocks, clay roofing tiles and concrete, not in a carefully constructed way to prevent flood damage, but just scattered along trails through the brush. There is also a boat and lots of household trash, including paper, plastic, and empty metal butane cans. 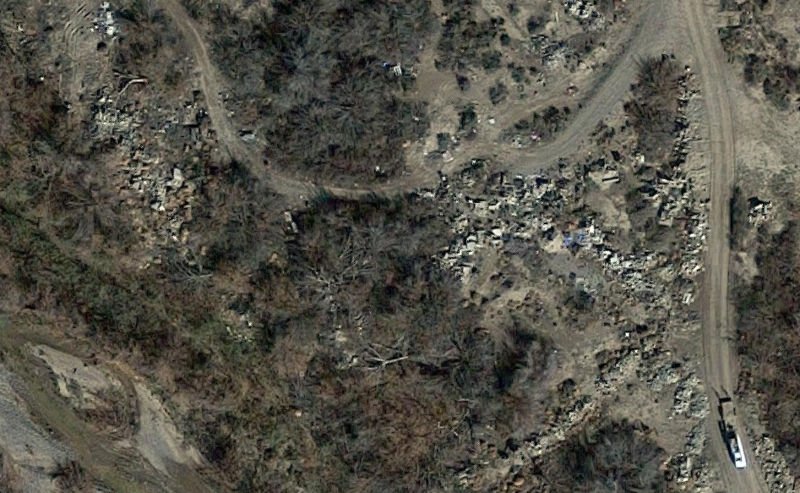 This is the illegal dump northwest of the Reay Lane Bridge in Thatcher. The clusters of white material are mounds of trash, rocks, roofing material, and other man-made debris. A channel of the Gila River is visible at bottom left. A pickup truck and trailer (not necessarily dumping illegally) are visible for scale at bottom right. Image taken from Google maps.

Laura Rogers, health program coordinator for the Graham County Health Department, said all dumping, including biodegradable material such as yard waste, is illegal.

“There is nothing legal to leave in the desert. If construction workers are taking it out into the desert, they’re doing it illegally, and I’m sorry, but shame on them,” Rogers said.

There is one exception for landowners, including farmers like Howard, who can give permission to dump certain materials on their own property, but they must monitor the dumping.

“Really the only thing (property owners) should accept is concrete, chunks of concrete, other than that, nothing should be dumped in the river or along the river banks,” Rogers said.

Another problem is people who do not have trash service and do not use the transfer sites for trash pickup. Rogers thinks they either burn their trash or just leave it on their land.

“You cannot create a waste site on your property, even though it’s been going on a long time here. It’s a safety issue, it promotes disease, it promotes a rodent problem (and) it promotes an insect problem,” she said. 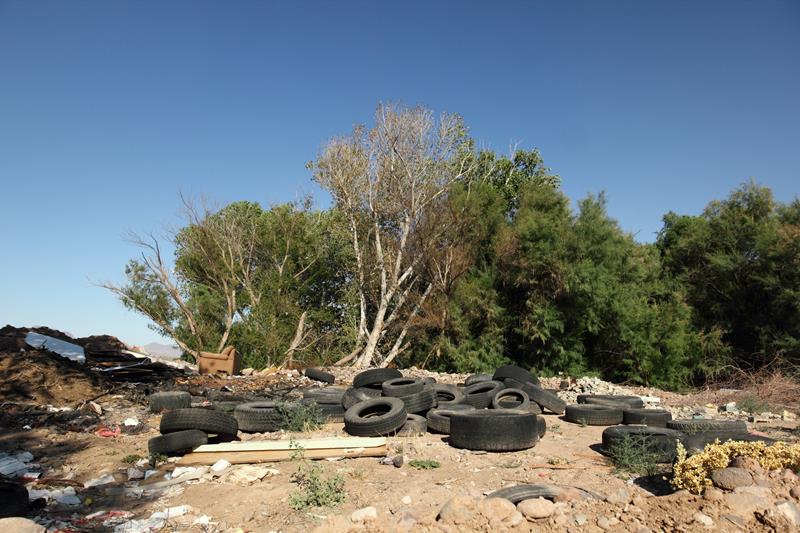 Eric Burk Photo/Gila Valley Central: People have begun illegally dumping everything from tires to a hot tub in the Howard dump site near the Gila River as seen in this May 23 image.

“I think people are too cheap and too lazy to (go to the dump),” Buhr said. “I also think the dump is not open late enough, when they close at 4, 4:30(p.m.) during the week. If someone works, it’s tough to make it to the dump the hours that they’re open.”

Once one person leaves trash somewhere, someone else is more likely to dump in the same spot.

Rogers works with SEACAB to organize events like the e-waste event and free dump days twice a year. SEACAB is also developing a program to mulch yard waste to give to people for a fee. Placing mulch around plants can dramatically reduce water loss from the soil, and mulching green waste keeps it out of the landfill. 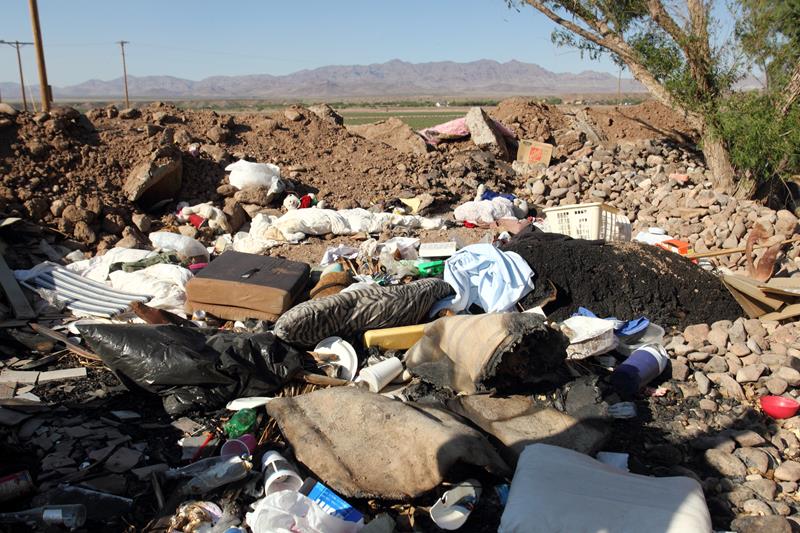 Graham County supervisor Danny Smith agrees that landfill costs and limited hours are part of the problem, especially since Graham County is one of the poorest counties in Arizona. Up until about 2003, the landfill and transfer stations were free.

“They weren’t even transfer stations then, they were just dumps,” Smith said. “There was a dump at Ashurst, there was a dump out in Artesia, there was one in San Jose, and they were unmanned and you could go there at any time of day or night and put anything that you wanted into the dump.”

Then, the Arizona Department of Environmental Quality stopped allowing multiple unmanned dump sites in counties across the state.

“So, Graham County closed all of its dumps, changed them to transfer stations to then haul (trash) to the dump. The dump was then manned, staffed and something has to pay for that, and so there’s your charge to dump,” Smith said.

The city of Safford is hoping to alleviate some of the cost to dispose refuse at the landfill by offering its residents one free pickup load of trash to dump each month in addition to already picking up four cubic yards of bulk curbside pickup per week. The city, which runs the landfill, has also extended its hours on Saturday from 8:30 a.m. to 2:30 p.m.

“The city continues to look for ways to alleviate illegal dumping,” said Safford City Councilor Chris Taylor. “The mayor and city council have made this a top priority.”

Rogers does not think reducing dump fees is the key to reducing illegal dumping. Instead, she wants to educate Gila Valley residents about the cost. She’s also working with local educators to implement Environmental Protection Agency curriculum in classrooms. 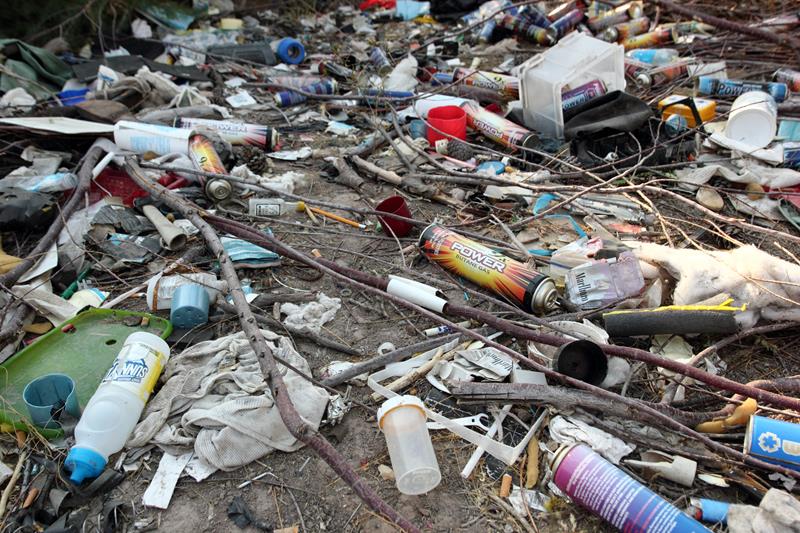 Smith suggested a workaround for the cost. Only 11 percent of the landfill operating costs come from dump fees.

“I think Safford, in particular, should just make their trash fees 11 percent higher, which I don’t think people would notice much, and the ability to then dump for free could help with the illegal dumping,” Smith said.

Just allowing Safford residents to dump free could significantly reduce the need for illegal dumping. For those outside of Safford, the problem is a little more complicated. It costs the county $40 per each person who uses the various transfer sites around the county, even with the limited hours currently in effect.

The fees start at $2 per individual bag of trash, and the minimum fee for small pickup trucks and passenger cars with more than one bag is $5. The hours vary depending on the site, but most of the sites are open twice a week or less.

“If we had our transfer stations open all the time, it would cost about half a million dollars a year,” Smith said.

One solution is to increase property taxes, but Smith isn’t sure Graham County citizens can afford an increased property tax for more hours at transfer sites. Rogers and Smith both think increased enforcement of criminal littering laws is critical. The county has placed more signs in areas like little Hollywood, the Reay Lane dump site, and on Frye Mesa Road, but the signs almost serve merely as markers of convenient dump locations. 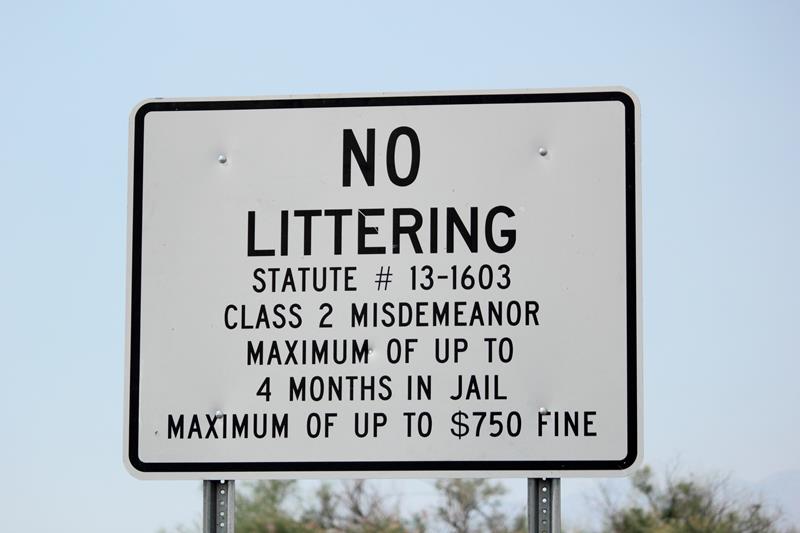 Eric Burk Photo/Gila Valley Central: The county has placed signs like this near illegal dump sites across the Gila Valley. Photo taken in Little Hollywood on June 30.

Smith thinks the penalties for criminal littering are already extreme. Arizona state statutes say that 100 percent of cleanup costs can be assessed to violators, in addition to fines levied by the courts. Businesses caught doing any criminal littering or individuals dumping more than 300 pounds of material can be charged with a Class 6 felony, with lesser charges for smaller amounts. Smith said penalties can include jail time and those convicted may have to pay up to half a million dollars, but prosecution is up to the Graham County Attorney Kenneth Angle.

“Never in the history of Graham County – that I’m aware of – has anyone been accused of and prosecuted for illegal dumping,” Smith said.

Smith is hoping a prosecution will help generate publicity. Although criminal littering is occasionally reported to the Sheriff’s Office and forwarded to Angle’s office, Angle and his staff are overworked, according to Smith.

“I know he is understaffed, and I know that he does the best he can, and he has people killing each other,” Smith said. “So, it’s just how much time do you want to devote to that.” 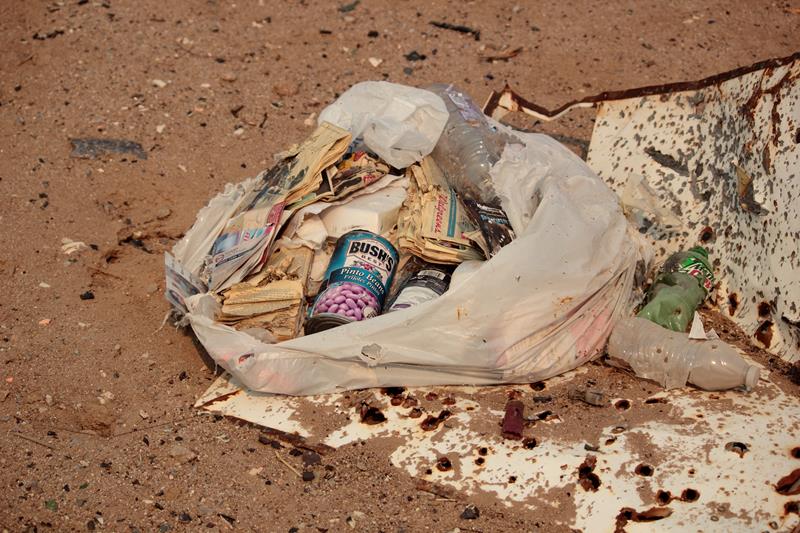 Eric Burk Photo/Gila Valley Central: A bag of trash is among the debris at an illegal dump near Artesia in this June 30 photo.

If community members want to report illegal dumping they can contact the Sheriff’s Office or call (877)-3-LITTER. In the end, Rogers thinks the key to prevention is to teach people the real cost of illegal dumping.

“We just want to educate people and tell them it’s not okay to do that because everything they take out there, eventually someone has to clean it up,” she said.

This article has been updated to reflect comments from SEACAB were from its founder, Jay Rasco.

Time for Toys for Tots