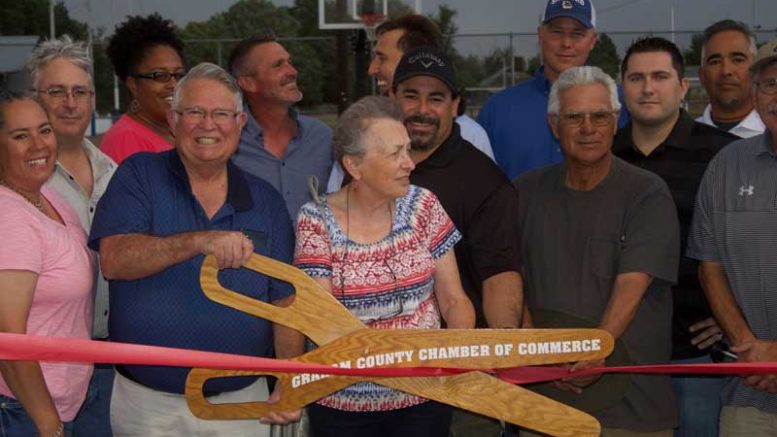 SAFFORD – It only took Ed Ragland 42 years of coaching to receive his well-deserved recognition. 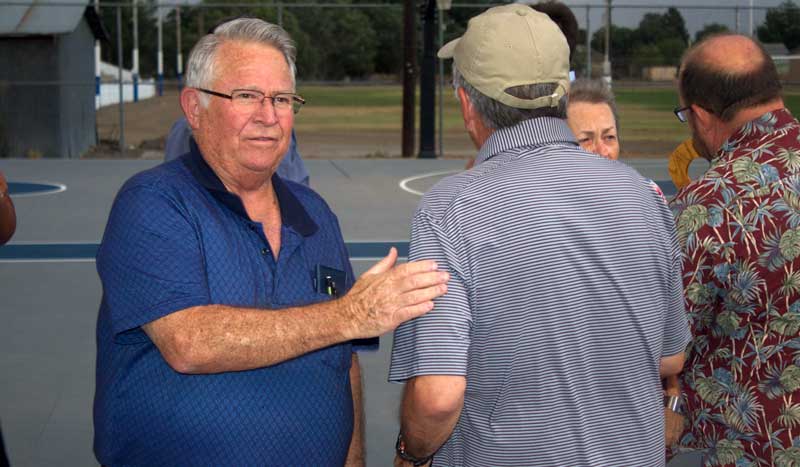 Jon Johnson Photo/Gila Valley Central: Ed Ragland thanks an attendee for coming to the event. Ragland was humbled by the recognition of having the newly constructed courts named after himself.

A mounting rainstorm couldn’t dampen the spirits of those who joined the Graham County Chamber of Commerce and Graham County Supervisor Danny Smith in dedicating the Eighth Ave. Ed Ragland Courts to its namesake early Wednesday evening. An assemblage of family joined Ragland and his wife, Monika, along with representatives from the entities that made the reconstruction of the courts possible to cut a ribbon and officially dedicate the courts.

“It’s a great honor to have it named after me,” Ed Ragland said. “One of the greatest things, I think, was all the people who came together to make this happen – you know, the school, the city, the corporations and all the individuals. I’d like to see more projects like this happen in the county.” 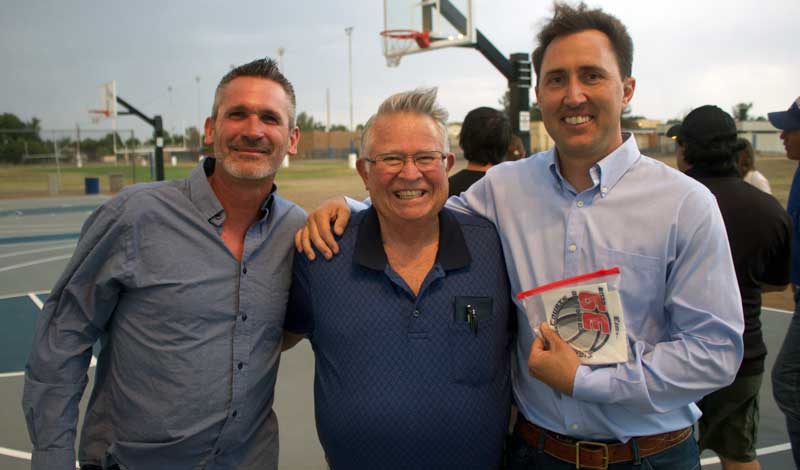 Safford Mayor Jason Kouts was on hand for the ceremony and praised Ragland for his community activism.

“It’s people like him that makes Safford great,” Kouts said. “We need more people like that. I’m seriously ecstatic about what he’s doing, and he’s still a vital member of the city.” 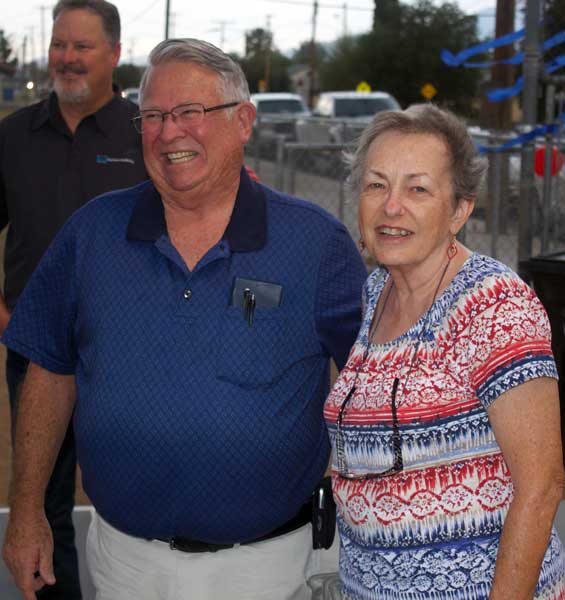 Danny Smith, who spearheaded the project with Tad Jacobson, thanked all those who assisted throughout the lengthy process and said the new courts are a beautiful thing to see. Major donors included Freeport McMoRan Inc. and the United Way of Graham County. Other funding came from the Gila Valley Recreation Committee, Safford Builders (ACE Hardware) and 71 individual donors.

Before the ribbon cutting, Smith rattled off some comments from individual donors who helped the project from both near and far.

The Boys & Girls Club of the Gila Valley also greatly assisted the project by allowing it to fall under its nonprofit 501c-3 status, which allowed for the $80,000 donation from Freeport McMoRan’s Community Investment Fund. Club Director Mick Ruiz praised the new facility and said he remembered playing on the old courts as a child.

“It’s awesome,” Ruiz said. “I learned how to play basketball on these courts when I was 5-years-old.” 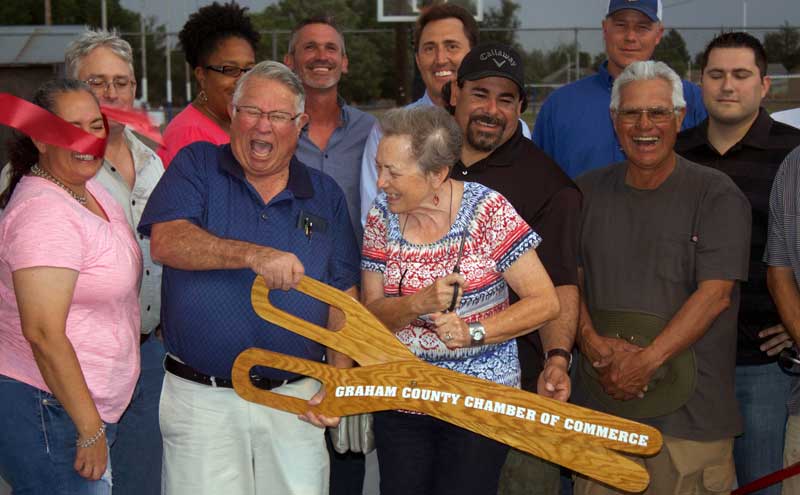 Jon Johnson Photo/Gila Valley Central: The wind and rain couldn’t dampen the spirits of those who showed up for the ribbon cutting. 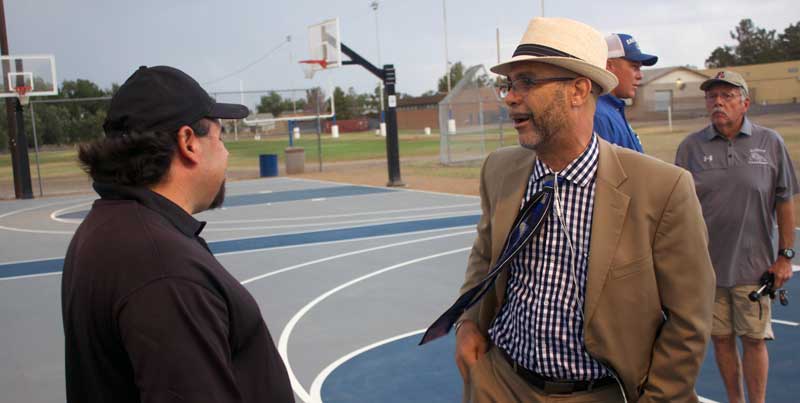 Gila Valley Recreation Foundation Director Chris Taylor was one of the players groomed under Ragland’s tutelage. He now serves as a coach in Ragland’s league and said he was proud the foundation he chairs could assist in the project and that a better namesake couldn’t be found.

“These courts are used all the time and they were just so run down, so when they had this idea we just wanted to give as much as we could,” Taylor said. “The way they turned out is a lot better than I thought it was going to be. It’s way beyond anything I could have even thought it would be. Danny did a great job and everyone who was involved. It’s just wonderful, and they’re put to good use every night.” 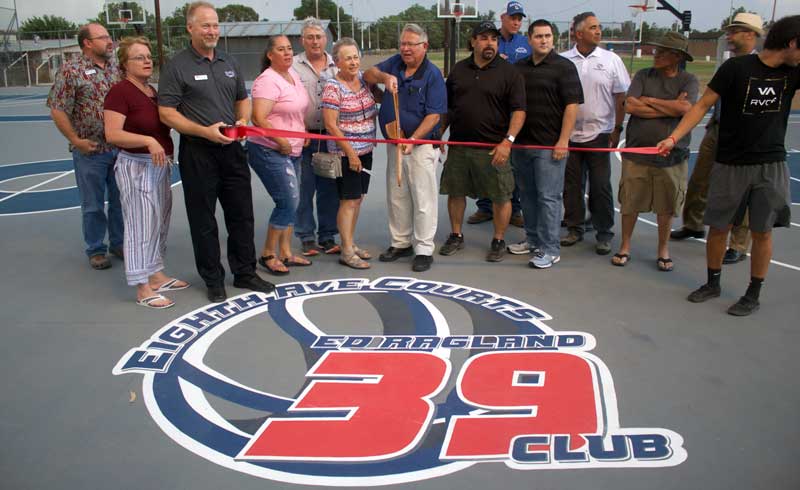