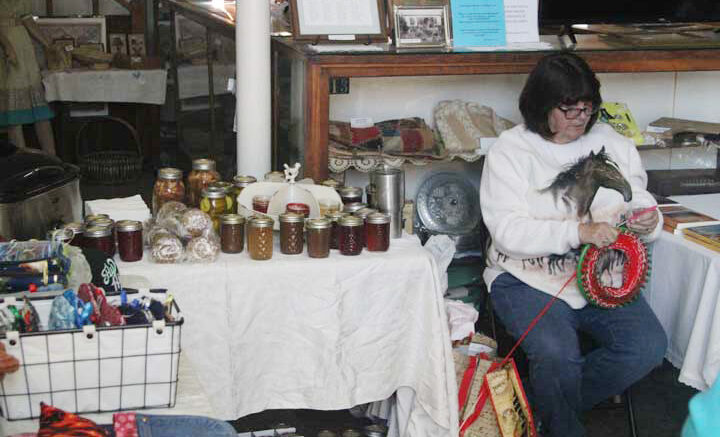 PIMA — A gap in the Gila Valley’s holiday traditions created an opening for Eastern Arizona Museum and Historical Society.

“I thought it would be an opportunity, since the Hospital (Auxiliary) didn’t do their yearly Christmas House,” said organizer Terry Bryant.

The bazaar served as a fund-raiser, with 15 vendors taking part, as well as attracting visitors who have never been in the museum before.

A highlight was the special book sales and signing by author Virgil Alexander, a Miami-Globe native who went to college at Eastern Arizona College and fell in love with the Gila Valley.

“Actually, the area inspired me to start writing fiction,” Alexander said. “I was working on a history book — I have never finished yet — and I ran across the story of the Wham Payroll Robbery.”

That led to his novel, “The Wham Curse,” which follows the modern-day exploits of a San Carlos Apache Police officer and two Graham County Sheriff’s deputies. Which, in turn, led to four more novels in the Deputy Allred and Apache Officer Victor series.

Alexander said he tries to come back to the Gila Valley as often as possible.

“I used to be here a lot. But since we’ve gotten older, my wife’s health is kind of poor and mine’s not great, so we get up here two or three times a year,” he said.

Alexander’s novels can be purchased at Barnes & Noble, Amazon or on his website.

The museum is open Thursday through Saturday, from 10 a.m. to 3 p.m. Volunteer and donations opportunities can be found at the museum.