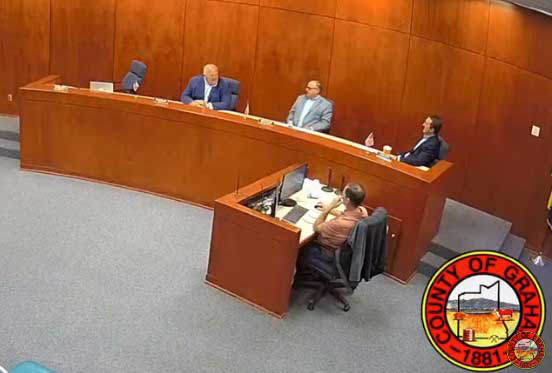 On Monday, the Graham County Board of Supervisors voted 2-to-1 to move marijuana growing from the M-X zone to the A zone with conditions applied or under a conditional use permit. Paul David and John Howard to approve, and Danny Smith, right, voted to deny the change. - Contributed Photo

SAFFORD — By a 2-to-1 vote Monday, the Graham County Board of Supervisors begrudgingly approved a change to the county’s zoning code as to how to allow the growing of marijuana.

“In a perfect world, I would amend the text amendment, and have a series of conditions and changes. Such as, to keep from proliferating and everyone having their own greenhouse, make it a minimum size like 10,000- or 12,000-square feet. So that people have a substantial investment, and you don’t just have people who are recreational enthusiasts who would decide that they’re going to come up with their own boutique brand of marijuana,” David said. “Also, in a perfect world, I would require that there be no processing in Graham County, because of the smell, and certainly no outdoor cultivation.”

Those changes, David explained, would start the process over so he said he voted to approve with his intention to make changes in the future.

The text amendment removes marijuana growth from the mixed use industrial zone (MX) and, instead, places it in the Agriculture/General Land Use Zone (A) with conditions applied or under a conditional use permit.

The change modifies the definition of enclosed area under marijuana regulations, limiting the property on which an enclosed grow operates to no more than 300 acres, and the enclosed area used for growing not to exceed 50 percent of that acreage.

It also mandates that hoop houses, high houses, cold frames and other portable and semi-portable structures do not qualify as an enclosed structure.

The change modifies the distance requirements between residentially-zoned property and marijuana grows, from the exterior wall of the enclosed grow to the lot line of the protected area.

And the text amendment modifies the operating hours for retail marijuana establishments, to opening no earlier than 8 a.m. and closing no later than 8 p.m.

Earlier this month, Graham County voters affirmed a 2021 Board of Supervisors’ re-zoning of two of the greenhouse complexes in Bonita to M-X to allow NatureSweet to sell the complexes to Bayacan for the indoor growing of medical-grade cannabis.

Heather Dukes, attorney for Bayacan, said the two companies are ready to proceed under whatever zoning regulations the county prefers.

“We want to comply with the zoning ordinance, period,” Dukes said. “So whatever changes are made, NatureSweet and Bayacan are ready to move forward and apply for any necessary applications we need to.”