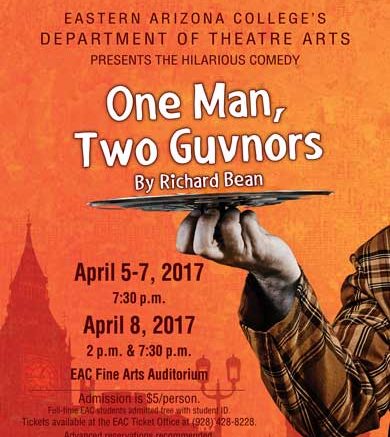 THATCHER — A bit of merry olde England comes to Thatcher in an upcoming production by Eastern Arizona College’s Department of Theatre Arts. One Man, Two Guvnors is a contemporary British farce by Richard Bean, based on the classic Commedia dell’Arte farce, The Servant of Two Masters, by Carlo Goldoni.

Francis Henshall is out of a job and looking for a way to earn some income and something to eat. He is hired by Roscoe Crabbe to serve as his assistant and, unexpectedly and simultaneously, is hired as an assistant to Stanley Stubbers. Henshall concocts what he thinks is a brilliant plan:  if he can serve both of these masters at once without their discovery, he will be able to earn double the money and double the food. Can he pull off this crazy scheme or will he get caught? What secrets are Stanley and Roscoe hiding? Will everything turn out successfully or will it end in hilarious chaos? Come to the show to find out.

William “Bill” Nidiffer, EAC’s associate professor of theatre design and production, will be retiring at the end of this semester, and One Man, Two Guvnors will mark the end of an era. When asked about his upcoming retirement, Nidiffer said, “I’ve been involved in theatre for over 30 years.  Before that, I spent 15 years as a musician and sound and lighting technician for a band.  After 45 years of ‘show business,’ I’m ready to retire and slow down, take it easy and explore new interests.  And it’s such a fun show to end on.”