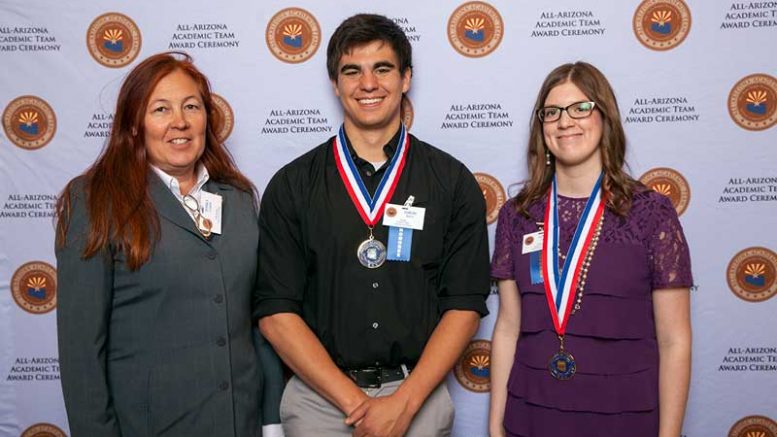 Contributed Photo: From left, Tonka Curtis stands with Jarom Beus and Lindsey Griffin, who were both recently honored along with students from Arizona's other community colleges at the 21st annual All-Arizona Academic Team ceremony and luncheon in Mesa.

THATCHER — Two Eastern Arizona College students, along with other students from across Arizona, were honored at the 21st annual All-Arizona Academic Team ceremony earlier this month.

The ceremony celebrated the distinguished leadership and outstanding academic achievements of 77 students enrolled in Arizona’s community colleges. The All-Arizona Academic Team is a state competition that complements the All-USA Academic Team, a national scholarship program.  Phi Theta Kappa, Arizona Board of Regents, USA Today and the American Association of Community Colleges sponsor the national competition and help Arizona students reach their educational goals by awarding them with scholarships to any of the three Arizona universities: Arizona State University, University of Arizona or Northern Arizona University.

Jarom Beus was named to the Second All-Arizona Academic Team. Majoring in Mechanical Engineering with a focus on energy and the environment, he plans on earning a master’s degree at Arizona State University and from there enter the industry to help create new energy-efficient devices and vehicles for the world. He has a 3.68 GPA and is the current Phi Theta Kappa president; a member of the Eastern Arizona College Executive Council; Pima Arizona volunteer fireman and an Engineering Club member. His favorite quote is by Thomas S. Monson, “Good timber does not grow with ease; the stronger the wind, the stronger the trees.”

Lindsey Griffin was also named to the Second All-Arizona Academic Team. A general studies major, she has a 4.0 GPA, and plans to transfer to Arizona State University through the EAC – ASU Bachelor’s Degree Program as an organizational leadership major. After earning a bachelor’s degree, she plans on obtaining a master’s degree from Northern Arizona University in library science. She already works in the EAC Alumni Library and hopes to one day serve as a library director at one of the schools in the Gila Valley. She is currently Phi Theta Kappa vice president; a member of the EAC Latter-day Saints Student Association and a member of the EAC Repertory Acting Company. She was also on the President’s List and is a Phi Theta Kappa Honor Society and Alumni Library Staff Scholarship recipient. Her favorite personal quote is, “An arrow can only be shot by pulling it backwards, so when life is dragging you back with difficulties, it means that it’s going to launch you into something great. So, just focus and keep aiming.”

Since its inception in 1990, the national partnership between Phi Theta Kappa, USA Today and the American Association of Community Colleges has provided international recognition and more than $1.5 million in scholarship opportunities for hundreds of outstanding community college students and the institutions they represent. The All-Arizona Academic Team component was established in 1996 as a joint effort between the Arizona Community College Presidents, the Arizona Community College Association, Arizona Board of Regents, USA TODAY, and Phi Theta Kappa International Honor Society.

The purpose of the annual All-Academic Team is to recognize scholarly achievements of students from junior, technical, and community colleges.  Students are ranked according to academic recognition, honors and awards, activities and leadership, community service and work experience, student essay, academic course rigor, and letters of recommendation.

Each student nominated for the All-Arizona Academic Team maintains at least a 3.5 grade point average on a 4.0 scale, is in good academic standing while working towards an associate degree, and is involved in campus or community volunteerism.

EAC’s SBDC offering ‘Start Up Smart: Taking the Right Steps to Start Your Own Business’ seminar