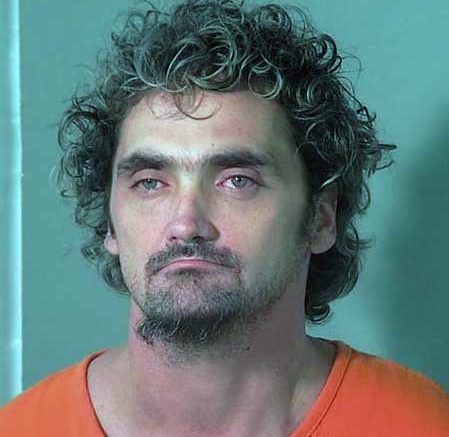 Contributed Photo/Courtesy GCSO: James Morris was booked into the Graham County Jail on assault and disorderly conduct charges. Morris allegedly wouldn't give a cell phone back to the victim because he was waiting on a call from his brother, who is incarcerated at the same facility.

SAFFORD – Police say a man forced them to use pepper spray (oleoresin capsicum) on him during a domestic assault call Monday.

James Morris, 40, was arrested and booked into the Graham County Jail for assault/domestic violence and disorderly conduct.

Officers were dispatched to a residence in the 900 block of S. 3rd Avenue at about 7:34 p.m. regarding a domestic violence situation.

According to the victim, James Morris had hidden her cell phone while he was waiting for a call from his brother, Jason Morris, 36, who had recently been incarcerated on a probation violation after officers located 13.8 grams of meth in a locked toolbox in Jason’s closet. Jason was on probation for failing to register as a sex offender.

The victim said she and a friend called the phone and realized James was sitting on it. Upon attempting to retrieve her phone, James allegedly cursed at the victim repeatedly and threatened her with physical violence, including telling her at one point that he was “going to beat your face in.” (sic)

At that point, Jason allegedly threw a can of Mountain Dew at the victim, striking her in her leg.

Officers located James on a couch in the residence with several phones in his left hand. According to a police report, James was uncooperative with the officers and threw the phones down and began screaming at them with his hands clenched. While two officers attempted to take James into custody, he allegedly resisted, which led to one of the officers to deploy his pepper spray to James’ face.

After being handcuffed, the officers escorted James to a patrol vehicle and used a neighbor’s garden hose to wash off his face.

James denied threatening the victim and said he had been sitting on the couch the entire time. He said he did kick a can of Mountain Dew, but denied throwing it at the victim.

He was then taken to the jail and booked without further incident.