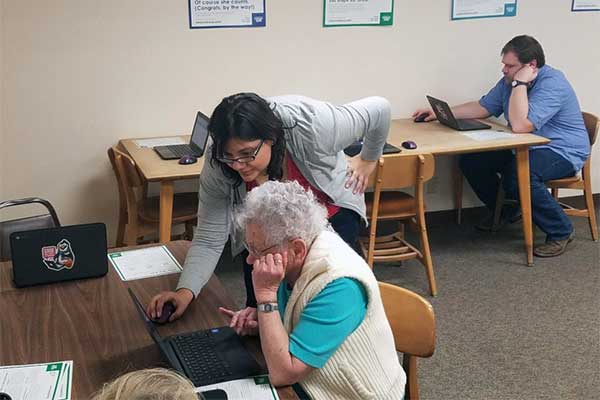 SAFFORD – Thursday marked the first day residents could complete the 2020 U.S. Census and, to encourage as many people as possible to participate, the Safford City-Graham County Library set up a Census station inside the facility.

“We are focusing on getting a complete count for the community, and providing computers and Wi-Fi to those who need assistance and those who need help to fill out the Census,” said Araceli Moreno, library technician.

The online form takes about 10 minutes to complete and focuses on basic information – such as age and racial make-up – about those who live in the household.

Those who take part in the kick-off event at the library are given an entry into a raffle for gift cards. The library event runs until 7 p.m. Thursday.

Computers will be located at various public buildings throughout Graham County during the collection period, which takes place until mid-April. After that, those who did not complete the form online or mail back a paper Census form will be visited by a Census taker.

Those who wish to complete the form at home can go online at https://my2020census.gov/.

It estimated that for each person in the community that isn’t counted, the community will about $3,000. Over the 10-year Census period, that equals $30,000 per person.

Census data determines funding for things such as roads, hospitals, parks and public safety. It also supports programs such as Medicare, AHCCCs, WIC, and free and reduced lunch. It helps fund programs for children such as Title-1 reading, early childhood intervention and Head Start.

In addition to funding, Census data is used by developers, community leaders and business owners to decide where to open new business, and build new schools, roads and community centers.

In order to help promote the Census, a competition between the local elementary schools has been organized to see which classes have the most families respond. The winning classes at each school will receive a pizza party.